On Toad-Eating, Tyranny, and Trump

Frank Palmeri is a professor of English at the University of Miami. He is the author of Satire in Narrative: Petronius, Swift, Gibbon, Melville, Pynchon (1990), Satire, History, Novel: Narrative Forms, 1665-1815 (2003), State of Nature, Stages of Society: Enlightenment Conjectural History and Modern Social Discourse (2016), and the editor of Humans and Other Animals in Eighteenth-Century British Culture: Representation, Hybridity, Ethics (2006). 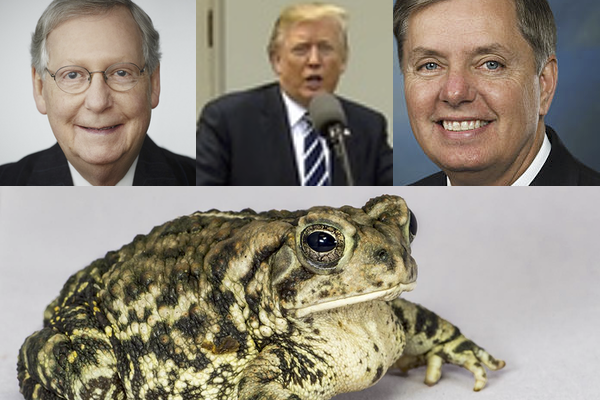 Exactly two hundred years ago, following two decades of war between Napoleonic France and Britain, and the restoration of the crowned kings of Europe, William Hazlitt wrote an insightful and plain-spoken essay, “The Times: On the Connexion between Toad-Eaters and Tyrants.” There he argued that English conservatives’ fierce defense of the absolute right of kings was founded on a base submissiveness toward power and hope for rewards. He gave sycophantic defenders of autocratic rule the traditional name for the charlatan’s assistant who swallowed live, supposedly poisonous toads in order to demonstrate the effectiveness of the con-man’s cure-all.

Hazlitt’s argument about the worship of absolutism can help us understand why current commentators may be waiting in vain for Republican national office-holders to exercise oversight or check an unfit and almost certainly felonious President.

The 80% of Republican voters and 10% of Democrats who approve of the President will not change their minds if House Democrats or a prosecutor from the Southern District of New York presents further evidence that Trump has committed bank fraud, evaded income taxes, laundered money, tampered with witnesses, suborned perjury, and obstructed justice—not to mention defrauded the US  by coordinating with an unfriendly foreign power the release of stolen documents and the sharing of sensitive polling data during an election. These charges and more are now all but certain. Most people know, even if they decline to admit, that Trump is a player of confidence games whose word is not his bond.

More to the point, his supporters love him for having gotten away with being such a dishonest character and operating in the shadows of illegality his whole career. In the American tradition that equates money with success, Trump is a success, and many Americans worship success, however achieved. These people cheer him because he is uninformed but unashamed, having no ethics but billions of dollars, at least according to his varying and less than reliable claims.

It does not matter to them, as it does not matter to him, that hundreds of millions of that money were funneled his way in the last twenty years by Russian oligarchs and other shady foreign nationals who own the majority of the condos in buildings such as Trump Soho. It does not matter that every business venture he initiated has failed—as the transcripts of his taxes from 1985-1994 show—nor that he has declared bankruptcy to evade creditors so many times in his career, nor that he has underpaid thousands of contractors who resemble his supporters. They do not support Trump despite his venality, immaturity, and obvious intellectual incapacity, but because of his failings of character.

They have been encouraged in their adulation by electronic and print media. The parallel function of the media in Hazlitt’s time explains why the title of his essay begins with the name of the most virulently conservative newspaper of the day. The Times served as the propagandistic arm of the governing Tories, slanting its reporting against any who attempted to reform the corrupt English election system. The paper used its power to mock and launch personal attacks portraying reformers and government critics as lunatics and terrorists.

The parallels between the Time sand Fox News could not be stronger. The second is waging, as the first once waged, a culture war by ridiculing and demonizing new ways of thought and policy proposals based on a desire for social justice. In the 2010s, as in the 1810s, cultural conflict serves as a vehicle and a surrogate for political conflict.

During the election, many Republican office-holders kept their distance from the candidate of their party because of his habitual mendacity, his vulgarity, and his general untrustworthiness. When he became President, however, Republican office-holders and the majority of conservative commentators revealed their remarkable capacity for toad-eating.

Consider the Senate, designed to be one of the principal checks on the power of a lawless Chief Executive. The majority now exhibits an automatic subservience to Mitch McConnell’s increasingly anti-democratic schemes for seizing and maintaining power for his party for the next generation. Every day they countenance the Executive’s untold violations of constitutional constraints and criminal law, any two or three of which would have led to their removal of a Democratic President from office.

Senator McConnell will grant with a smile and a twinkle in his eye that Trump is indeed an “unusual” politician. So is McConnell an unusual Majority Leader—a former institutionalist who tears away any shred of independence and legitimacy the upper chamber ever possessed. It now resembles the Roman Senate under the Empire, whose sole business was to inquire what were the wishes of the Emperor—how high would he like the Senators to jump, and which of them would he like to see commit suicide today?

As a Representative, Lindsay Graham prosecuted Bill Clinton in order to “purify and cleanse” the Presidency because of one inconsequential lie. As a Senator, he now adamantly defends the unending stream of untruths that flows from Donald Trump’s mouth and through his Twitter account every day. There is little point in multiplying examples. Is there any need to mention Bill Barr, Rudy Giuliani, Paul Ryan, or Kelly Ann Conway? 99% of Republican legislators? The number of compromised followers is depressingly incalculable.

But how, specifically, does our current pathological political condition illustrate the connection Hazlitt draws between toad-eaters and tyrants? As Hazlitt observed, legislators and media defenders are motivated by both fear and self-interest—fear of retaliation by the ruler on the one hand, and, on the other, the chance of retaining or improving their position and increasing their wealth and influence during his reign.

Hazlitt’s analysis also throws light on why despots are able to attract followers. Their appeal derives from the consolations of unity and adoration of the One. In Hazlitt’s day, that respect was still based on the idea of a “divinity that hedged a king,” what he viewed as the false and ridiculous belief that a king was different from all the rest of humankind. Hazlitt anticipates the characterization of the authoritarian personality—a weak character that needs to identify itself with a strong leader in order to feel secure—as elaborated by Theodor Adorno and Max Horkheimer after the defeat of the Nazis in 1945.

In our day, the attitude of irrational enthusiasm for the President is also based on the doctrine of the “unitary executive” advanced by Dick Cheney and others in the Reagan years. This doctrine rules out all dissention or differences of opinion within the executive branch concerning policy, judgment, or facts. The executive branch must speak with one voice and one will—those of the Chief Executive. As the determined xenophobe Steven Miller asserts: “He will not be questioned!”

That is to say, any Republican Chief Executive will not be questioned.This doctrine clearly and quickly leads toward consolidation of power in the Chief Executive, as capricious as he may be. In the right circumstances—if his party is in charge of the legislature and the Supreme Court—it enables him to be a lawless ruler.

Representative Jerry Nadler and other Democrats have said that Trump is behaving like a king, but he is actually acting as something worse—a tyrant. A constitutional monarch in fact acts within the law, but a tyrant disregards the laws and the common good while pursuing self-interest and personal pique. Representative Jackie Speier has more accurately asserted that the President “has in many respects become a dictator.” As the self-proclaimed One who “alone can solve” the country’s problems, he has the unconditional support that a tyrant needs. A host of Fox & Friends explained on May 9 that because he once bought a $28 million yacht, “he’s different from you and me.” Perhaps so, but not in any way that qualifies him for a high office of public trust.

The paradox that Hazlitt’s psychological analysis exposes is that, like their base, Republican legislators and commentators find it easier and more exciting to defend a manifestly absolutist Executive who cares for nothing except money and power than to support a more moderate and thoughtful one. Partisans of absolutism are able to retail the most absurd justifications or explanations, freed by the example of their leader from logical constraints or concern for consistency and right. The more extreme and offensive the policy, the more transparent the excuse for misbehavior, the more contradictory the reasoning, the more delusional the thinking, then the louder and more ferocious is the defense of the leader’s moral vacuity, spitefulness, and ineptitude. The supporters are defending the ruler’s power, not his character, policy proposals, or arguments.

The early Church Father Tertullian said that he believed that his Lord was both God and man not despite the idea’s absurdity, but because of it. Republican office-holders, commentators, and the base support Trump not despite his being a reality television star who is playing President, but because he has no qualifications, no knowledge of history, no understanding of the Constitution, no care for anyone’s interest but his own. They thus demonstrate their devotion to the pure pursuit of party power, unmixed with principle. That is the mark of pure and true toad-eating: “A rogue’s obeyed in office.”

It is not a pretty sight—the accelerating dissolution of a constitutional democracy that worked fairly well for a few decades in the mid-twentieth century. But at least we who witness the tragic and farcical spectacle can call the actors in it by their proper names.