Anders Walker is the author of The Burning House: Jim Crow and the Making of Modern America (New Haven: Yale University Press, 2018).  He is the Lillie Myers Professor of Law and Professor of History at Saint Louis University, in St. Louis, Missouri. 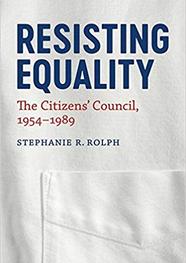 How does racism survive?  This is one of the questions taken up by Stephanie Rolph in her new book, Resisting Equality: The Citizens’ Council, 1954-1989.  Born in Mississippi, the Councils played a central role in massive resistance to Brown v. Board of Education, eschewing the terrorist tactics of the Ku Klux Klan for more subtle strategies aimed at thwarting black activism, including economic pressure and pseudo-scientific racist propaganda.  For many, the Councils embodied a type of “uptown” or “white-collar” Klan, a point underscored by Harper Lee when she made Atticus Finch a member in her novel Go Set a Watchman.  Of course, the Councils failed to stop the civil rights movement, leading historian Neil R. McMillen to describe them as “a poignant, perhaps even pitiable, symbol” of those few Americans “unwilling to pay more than lip service to the nation’s equalitarian ideals.”

Today, racism seems to be on the rise – again.  And the Councils might explain why.  Building on McMillen’s landmark study, Rolph brings the group’s story forward, into the 1980s, and shows how the Councils went from a grassroots organization focused on racial intimidation to a much more specialized type of racist think tank, an organization that warehoused and distributed racialist views long after such views had been discredited by the federal government, the mainstream media, and the academy.  In this new guise, argues Rolph, the Councils began to occupy a strategic space in radical far right circles not just in the South, but across the United States and the world, including embattled white enclaves in Rhodesia (now Zimbabwe) and South Africa.

What ensues is a fascinating meditation on the survival of racial thinking, thanks in part to the Councils refusal to adapt their views.  While many white southerners muted their racial sentiments and assumed a more anodyne “sunbelt conservativism,” as Matthew Lassiter, Joseph Crespino, and Kevin Kruse have shown, the Councils remained defiantly racist, like a stubborn rock formation resistant to erosion, providing simplistic, race-based explanations for complex social problems like crime, joblessness, and urban disorder.

Of course, historians like Tom Sugrue, Richard Rothstein, and James Forman, Jr. have all shown that urban disorder stemmed from a host of complex, intersecting forces, including southern migration, deindustrialization, white flight, red-lining, suburbanization, and aggressive law enforcement, but the Citizens’ Councils kept it simple.  As Rolph demonstrates, the Councils explained black poverty and joblessness as a simple factor of racial difference, “a predictable outcome of the actions of a race of people biologically incapable of self-regulation.” (p. 173)

For the uneducated and uninformed –  i.e. those who have not taken a seminar in urban history –  this was, and remains, an appealing idea, a unified theory of American society grounded in the perceptible, physical structures of that society, its crumbling cities, its pristine suburbs, it’s urban blight, it’s suburban bloom.  To borrow from Fernand Braudel, it is a way of thinking that survives over the long term, or “longue durée,” not because racists are inherently bad, but because it provides an easy explanation for complicated realities.

And herein lies a stubborn irony.  Before the civil rights victories of the 1960s, African Americans could point to concrete examples of racial discrimination that were hard, even for racial conservatives like Harry Truman, to ignore.  Lynching in the South provided an example, as did segregated schools, segregated buses, segregated lunch counters, and a host of other explicitly racist institutions and policies.  Today, however, racial oppression is more subtle, less visible, and – ultimately – harder to discern, a topic for advanced seminars, a subject of advanced study.

But what of those who don’t study?  For them, racism is a theory that fits in a tweet, a short explanation for the longue durée.

To read more from Anders Walker, check out his most recent book: 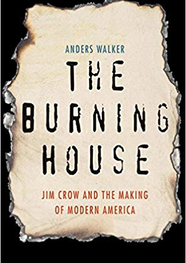