The Perils of Criminal Justice Reform

Tony Platt is a Distinguished Affiliated Scholar at the Center for the Study of Law & Society, University of California, Berkeley.  His most recent book is Beyond These Walls: Rethinking Crime & Punishment in the United States, published by St. Martin’s Press (January 2019).

I started working on Beyond These Walls: Rethinking Crime and Punishment in the United States during the Obama presidency. I wanted to understand and hopefully explain why no substantial reforms of the carceral state occurred in the second decade of the 21st century, despite militant street protests against police killings and widespread consensus among liberals and libertarians that something needed to be done about the country’s unprecedented rate of imprisonment.

Reform is one of the most overused, misused, and Orwellian terms in the English language. “I am well convinced that it is kind, humane, and meant for reformation,” wrote Charles Dickens in 1842 after he witnessed a Pennsylvania prison’s system of silent solitary confinement. But its outcome, he observed, was to subject prisoners to “torturing anxieties and horrible despair” that left them “dead to everything.”

This combination of benevolent rhetoric and punitive measures is a persistent theme in American criminal justice history. During World War I, for example, the federal Comission on Training Camp Activities claimed to be acting in the interest of “delinquent women and girls” by rounding up and detaining without trial some 30,000 of them suspected of spreading venereal diseases and perversion, while the men received health care and wholesome entertainment.

When government officials and their allies call themselves reformers, it’s time to look out, and to look deeply and carefully at what is being proposed. Most government-sponsored reforms of criminal justice operations manage and rearrange existing institutions of power.

Not all reforms are manipulative and repressive. There is also a tradition of progressive grassroots reforms that try to make a difference in and empower people’s everyday lives. But these efforts to accomplish structural reforms typically are undermined in practice. Why have there been more failures than successes, and what is needed to reverse this sorry record?

Historically, the overwhelming majority of reforms are top-down, state-engineering initiatives that are never intended or designed to expand the rights or improve the well being of their recipients. One of the earliest examples was the Progressive Era’s child-saving movement that formally did away with due process for juvenile delinquents. It recruited social workers, public health personnel, police, and urban reformers to send thousands of European immigrant youth to punitive reformatories, and Native American youth to boarding schools where they were punished for “speaking Indian.” In the 1940s, the Preston School of Industry in California was “organized like the military,” a former prisoner recalled. “We marched everywhere, and were always on ‘Silence’.”

The child-saving movement was a model for many other government reforms that, in the words of historian Lisa McGirr, came loaded with “strong doses of coercive moral absolutes,” such as forcing the children of Jehovah’s Witnesses to salute the flag during World War I in the name of spreading patriotism, and then criminalizing their parents when they refused. In the 1920s, the federal Prohibition Bureau, with five times more staff than the FBI, saved the drinking poor from the scourge of alcohol by arresting them, while the wealthy drank in private clubs or bribed their way out of arrest. Between the world wars, government agencies compelled the sterilization of some 60,000 working class women in the name of purifying motherhood. Similarly, in the 1950s, “protecting the family” supposedly justified purging gay men from government jobs and subjecting them to the kind of systematic harassment by police that young African American men routinely experience.

We see the same kind of coercive benevolence at work today when local governments and professional functionaries invoke civility codes to tear down homeless encampments and in cities such as Irvine, California, run beggars out of town in order to “keep our streets safe.”

The second type of reform has a democratic impetus and is intended to expand the rights of the disenfranchised and improve people’s everyday lives. Pursuing this kind of grassroots initiative requires the stamina of a marathon runner, for there is a long history of trying to substantially reform criminal injustice operations that typically does not end well.

Take, for example, the 1963 U. S. Supreme Court decision in Gideon v. Wainright that required states to provide attorneys to defendants in criminal cases if they cannot afford counsel; and the bail reform movement that achieved passage of the Federal Bail Reform Act of 1966 that granted release on own recognizances (OR) to federal defendants in noncapital cases.

The Gideon case represented a victory for activists who had struggled for decades to bring some balance to an adversary system of criminal justice that is heavily weighted in favor of the prosecution. “Thousands of innocent victims,” wrote W. E. B. Du Bois in 1951, “are in jail today because they had neither money, experience nor friends to help them.” The provision of government-funded defense lawyers was supposed to rectify this wrong.

However, the underfunding and understaffing of public defenders, and pressures from criminal court bureaucracies to process cases expediently resulted not in more trials and more pleas of innocence, but in a decline of trials and increase in guilty pleas. How can clients get a “reasonably effective defense” in Louisiana, for example, if a single public defender is expected to carry a caseload of 194 felony cases? “No majesty here, no wood paneling, no carpeting or cushioned seats,” writes James Forman, Jr. about his experience as a public defender in Washington, D. C. It wasn’t unusual for him to want to cry in frustration at the railroading of his clients. “Sometimes the only thing that stopped the tears,” he says, “was another case or client who needed me right then.”

The Federal Reform Bail Act met a similar fate. Much of the legislation’s provisions were destroyed by the Nixon and Reagan governments as new legislation eliminated OR for dangerous defendants, a proviso that ultimately included people arrested on drug-related and non-violent behavior, meaning just about everybody. Today, more than sixty percent of people confined in the misery of local jails are there because they are unable to make bail and do dead time, a travesty of “presumed innocent.”

Too often when progressive reforms are passed, they stand alone as single issues and are generally ineffective because they lack sustained and wide support, or they are whittled away to the point of ineffectiveness. A similar process is at work with the recent First Step Act, Congress’ tame effort at federal prison reform. This legislation originated in the efforts of reformers during the Obama presidency to dramatically reduce mass incarceration nationwide. By the time of the Trump presidency, the libertarian Right dominated the politics of reform and put their stamp on the Act: no relief for people doing time for immigration or abortion or violence-related crimes; the privileging of religious over secular programs; and a boost for the electronic shackling industry.

Too often, substantial reform proposals end up politically compromised and require us to make a Sophie’s choice: release some “non-violent offenders” and abandon the rest, including tens of thousands of men who used a gun during a robbery when they were in their 20s. Or give public welfare relief only tocarefully screened “worthy recipients,” while subjecting millions of women and children to malign neglect. Or, potentially, provide the immigrant Dreamers with a path to citizenship while making their parents and relatives fair game for ICE. 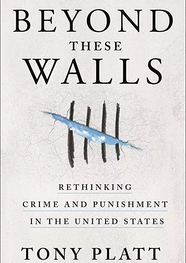 It’s not for lack of trying that substantial reforms are so difficult to achieve. There are structural, multifaceted reasons that undermine our effectiveness.  “America is famously ahistorical,” a sardonic Barack Obama observed in 2015. “That’s one of our strengths – we forget things.” In the case of efforts to reform prisons and police, we remember the experiences of Malcolm X, George Jackson, Attica, and the Black Panther Party, but then amnesia sets in.

We need to reconnect with the writers, poets, artists, activists, and visionaries who generations earlier took on the carceral state and forged deep connections between the free and un-free. Let’s remember Austin Reed, a young African-American incarcerated in ante-bellum New York, who told us what it was like to “pass through the iron gates of sorrow.” And the Socialist and labor leader Gene Debs, imprisoned many times for his activism, who made sure his comrades in the 1920s knew that his fellow nonpolitical prisoners were “not the irretrievably vicious and depraved element they are commonly believed to be, but upon average they are like ourselves.” And the young Native American women and men, forcibly removed to boarding schools, who reminded us of their resistance, as in the words of a Navaho boy: “Maybe you think I believe you/ But always my thoughts stay with me/ My own way.”

Revisiting this long historical tradition is important, not out of nostalgia for what might have been or to search for a lost blueprint of radical change, but rather to learn from past reform efforts and help us to understand the immense challenges we face – to “bring this thing out into the light,” as the civil rights leader Fannie Lou Hamer used to say.

In addition to a deep history, we also need a wide vision in order to see that state prisons and urban policing are components of a much larger and more complex private and public social control apparatus that plays a critical role in preserving and reproducing inequality, and in enforcing injustices. No wonder that structural reforms are so difficult to achieve and sustain when carceral institutions are sustained by private police, public housing and education, the political system, immigration enforcement, and a vast corporate security industry that stokes what Étienne Balibar calls the “insecurity syndrome.”

Struggles for equality in the United States have usually been uneven and precarious, with improvements in rights and quality of life for one group often coming at the expense of others – not consciously, but in effect. Our challenge is to rebuild a social and political movement that bridges the divide between a panoply of activists in the same way that post-World War II civil rights and black liberation organizations incorporated prisoners and victims of brutal policing into the Movement. Important single-issue campaigns – to eliminate cash bail, to restore voting rights to millions of former prisoners, and to make American prisons comply with global human rights standards – will have a better chance of success if backed by a multi-issue, grassroots campaign.

We should not give up on big ideas and structural reforms. We never know when a spark will light a fire and energize a movement. Let's remember that it was protests against a police killing in a place like Ferguson that led to the Black Lives Matter movement and compelled a meeting with the president; and it was a high school student protests for gun reform in Florida that prompted a former Supreme Court Justice to call for the abolition of the 2nd Amendment.

The Right has been extraordinarily effective in promoting a dystopia that anchors and propels its law and order policies. We need a comparably progressive vision.  In this moment of resistance and defense, to articulate an ideal of social justice might seem like pie-in-the-sky and a waste of energy. But to get support for progressive policies will require widespread endorsement, and this will only happen if we speak to people’s deeply held anxieties and aspirations. Without a movement and long-term vision that engages people, good policies wither.

It will take nothing short of a broad-based movement, a revitalized imagination, and reckoning with a historical legacy that bleeds into the present to make the criminalized human again and end the tragedy of the carceral state.