Battlefield Tourism At Ypres and How Public History Sites Change

by Mark Connelly and Stefan Goebel

Mark Connelly and Stefan Goebel teach history at the University of Kent, UK. Their latest publication is Ypres, published as part of the Oxford University Press ‘Great Battles’ series. 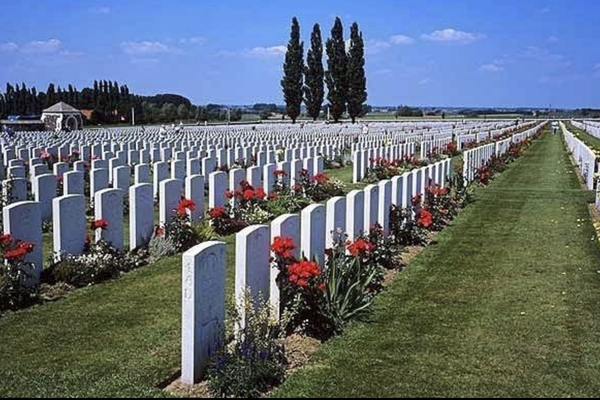 Ypres or ‘Wipers’ (the soldiers’ slang name) in Belgium has been a magnet for battlefield tourists since 1918. The first wave of (mainly Anglophone) visitors in the 1920s thought of themselves as ‘pilgrims’ rather than ‘tourists’, but the boundaries between commemoration and commerce were as fluid then as they are now. After a brief slump in the 1970s, the tourists have been returning to West Flanders in ever greater numbers, especially since the 1990s.

Visiting Ypres, or Ieper to use its modern name, is an amazing experience. First, there is the sheer wonder of wandering around a seemingly historic city which, on closer inspection, proves to be of very recent completion. Then, there is the impressive scale of the massive Cloth Hall, the great medieval trading market which attracted merchants from across Europe. But, that too proves to be a bit of curiosity when stared at, as the mix of very smooth, sharply cut stone merges with the pock-marked, scarred and worn pillars along the ground floor. Next to the Cloth Hall is a soaring medieval cathedral, but enter inside and it feels so new you almost expect it to squeak as it comes out of the shrink-wrap. Finally, there is the Menin Gate, a huge memorial to the British and Commonwealth missing of ‘the salient’. Tucked into the ramparts, the Menin Gate almost leaps out on the visitor walking along the street from the central square (the Grote Markt).

It is the Menin Gate that provides the key to the rest of the mystery, for it commemorates the fact that this charming West Flanders city witnessed some of the most intense and prolonged fighting on the Western Front between 1914 and 1918. Inscribed on the Gate are the names of some 56,000 soldiers how have been missing since the war. During that fighting Ypres was reduced to rubble and ashes only to rise again in replica form. And that is an underlying theme of our work: the recycling, rebuilding, reconstruction of images, stories, and histories of Ypres which stands alongside the physical construction of memorials, monuments and cemeteries in a reconstructed landscape. It is about construction and reconstruction; the encoding and reinterpreting of a major historical event within its original space, and how the battlefield of Ypres could be brought home.

Battlefield tourism (or ‘pilgrimage’) has been at the heart of this often deeply emotional process of bringing the war home since 1918. For the British the city was indeed a site of pilgrimage, as summed up in the title of an early guidebook, Ypres: Holy Ground of British Arms. The British thought the ground was made sacred by the bloody sacrifice of countless soldiers from the British Empire. Running alongside this reverential mode was that of the tourist, as British people sought to buy souvenirs and have home comforts. By the mid-twenties Ypres businesses were appealing directly to the British. ‘If you want a cup of good strong English tea have at the Tea Room’, was one café’s advertisement. 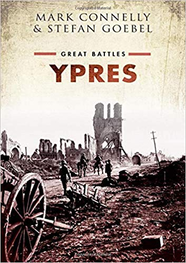 What the Baedeker guidebook noted in 1930 still holds true today, namely that Ypres had ‘acquired a certain English air’. Today’s visitor, walking the streets of the ‘medieval’ town, attending the daily remembrance ceremony at the Menin Gate or visiting a war cemetery on the outskirts of the city, is unlikely to bump into a German battlefield tourist; even at the German war cemetery at Langemarck (some six miles to the north-east of the city), anglophone visitors greatly outnumber their German counterparts. This was not always the case. ‘Langemarck’ had once occupied a special place in the German memory of the Great War. It was the site where war volunteers had allegedly marched into death singing ‘Deutschland über alles’ in November 1914. The memory of their noble ‘self-sacrifice’ became a rallying cry for the political right during the 1920s and 1930s. When the Wehrmacht overrun Belgium in May 1940, this was celebrated as ‘Second Langemarck’. After 1945, following a hiatus of several years, German veterans of the First World War returned to the city for the 50th anniversary celebrations, often at the invitation of the city keen to foster a spirit of reconciliation. With the passing away of the veterans during the 1970s, the presence of German visitors in and around Ypres declined dramatically – precisely at the moment when British battlefield tourism started to increase again. Most German veterans went to their graves with their war stories, and only a negligible number of families toured the battlefields in the hope of recapturing something of the war experiences of their grandfathers. Flanders – the mere mention of the name could still send shock waves through the generation of survivors in the 1950s – faded from German collective memory and largely disappeared from tourist itineraries.  The new generation, it seems, no longer felt a deep emotional connection to the war dead and the landscape of the Ypres salient.

Today’s Ieper still has thousands of British visitors, with tourism as important to the economy of the city as it was in the twenties. But, in addition to the British, the Australians, Canadians, New Zealanders and also Americans are now coming in even greater numbers, as well as people from many other nations fascinated and intrigued by meeting the last great eyewitness left of the Great War: the landscape. Modern Ieper is a world forged and shaped in the furnace of a conflict that ended one hundred years ago this November.