Feisty Singer Nina Simone Is Back in New Play 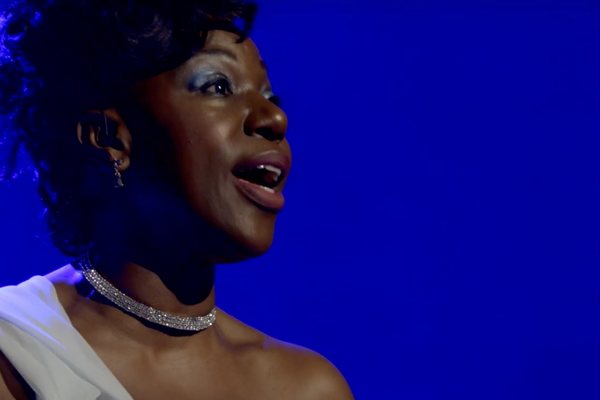 We all remember Nina Simone, the extraordinarily gifted singer who was named one of the thirty greatest singers of all time by Rolling Stone magazine, championed numerous causes within the Civil Rights movement, marched with Martin Luther King and developed a highly individual performing style that rumbled from classical musical to jazz to pure barroom.

The lyrical likable Nina is back in Laiona Michelle’s new play. Little Girl Blue: The Nina Simone Musical, that opened last weekend at the George Street Playhouse in New Brunswick, N.J. It is not only a pretty good show but a vivid historical look at the life of a singer in the 1950s and ‘60s, and the Civil Rights movement. It is a fond look back for one generation of Americans and a real eye-opening show for the younger generation who, in the Super Bowl halftime show did not have the genius of Nina.

Nina Simone, says the actress who plays her in the show, Laiona Michelle, ran into a thick wall of racism as a teenager when, having finished Juilliard School, she was turned down for admission to the prestigious Curtis Institute of Music in Philadelphia because she was black. From there, she launched herself as a performer, striking gold right away with a single, I Love You Porgy. She followed that with a successful first album, Little Girl Blue.

Her very original style made her a hit in Greenwich Village clubs in the same years that she joined the Civil Rights struggle. There, she had an immediate impact with a song, Mississippi Goddam, her scorching response to the 1963 murder of Medgar Evers and the ’63 bombing of a Baptist Church in Birmingham, Alabama, that she sings in the show.

In the musical - the set is a nightclub - Nina charged that by 1970 she was fed up with racism in America and “blacks shot down in the streets” and moved to Europe, where she immediately carved out a nice career in the UK, France and Switzerland during the last years of her life.

Little Girl Blue is a good show, filled with much of her music. It has some minor troubles, though. First, it is very, very slow, Oh My God slow, in its first half hour. Then, when she gets married to an abusive husband, the pace quickens. Second, many of her hits, like Who Loves You Porgy, are not included in the show. Third, the events of her life are all out of order and get you mixed up. She joined the Civil Rights movement because of the Curtis Institute rejection as a teenager, but that incident does come into the show until near the end. Huh? Fourth, she suffered from bipolar disorder, never mentioned in the show (on stage, Nina just says that she “stopped taking my medication”).

In the show, it is clear that she had mental difficulties. She had a quick temper, yelled at her musicians and stormed off the stage on occasion. There were many incidents of violent behavior that are not mentioned and they formed an important part of her life. As an example, she fired a gun at a record company executive, whom she accused of stealing her royalties and admitted to police that she tried to kill him but missed. She shot and hit her neighbor’s son with an air rifle in a dispute over noise he was making. She pulled a gun on a shoe store employee to force him to refund her money for the purchase of a pair of sandals. She got angry at a friend, singer Janis Ian, and ripped a phone out of a wall in anger when she was refused money by her.

Director Devanand Janki, who does an otherwise fine job, should have insisted that all or some of these incidents be included in the show.

The scenes of violence that are in the show are gripping, such as her husband’s verbal and physical attacks on her (he apparently beat her up several times and once punched her in the stomach when she was pregnant). These attacks, her exile from the United States and the difficulties she had getting along with people, racism, plus the problems or raising her daughter as a single mom, help to paint a portrait of her as a sad victim of bi-polar disorder, the record business and, frankly, herself. The members of her band, who suffered her abuse for years, are played by Mark Fifer, Saadi Zain and Kenneth Salters.

Ms. Michelle, despite her own awkward book, is quite good as Nina, and in some scenes emotionally electric and very appealing.

Even with these difficulties, the play is pretty good. It needs to be tightened up a bit and Michelle should get rid of some songs and add others, though.

The one thing that excited me was the way that playwright Michele drew such an engrossing portrait of entertainment history in that era and showed how it was so different for people of different racial backgrounds.

And oh, that Nina Simone could sing!