Mark R. Cheathem is a professor of history at Cumberland University, where he also serves as  project director of the Papers of Martin Van Buren. He is the author or editor of seven books, including The Coming of Democracy: Presidential Campaigning in the Age of Jackson and Andrew Jackson, Southerner. 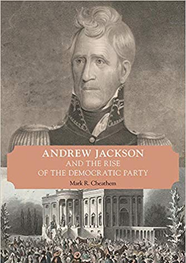 In the recently published Death of a Nation: Plantation Politics and the Making of the Democratic Party, Dinesh D’Souza takes Democratic party founder Martin Van Buren to task for creating a racist political party in the 1820s. According to D’Souza, “based on his observations of the rural plantation–and the similarities he noted between slaves in the South and newly arriving impoverished immigrants in the North–Van Buren adapted the Democrats’ plantation model to urban conditions.” In doing so, Van Buren “helped create new ethnic plantations based in the cities, populated by immigrants who were dependent and exploited by the Democratic Party in the North in somewhat the same manner as the slaves were by the Democrats in the South” (18).

Like many nineteenth-century northern politicians, Van Buren was contradictory when it came to race. One the one hand, he held views at times that appeared anti-slavery. In 1822, Van Buren, then in the U.S. Senate, supported a legislative amendment that would have made it difficult to bring enslaved people into the new state of Florida. Three years later, he called the slave trade “detestable.” When nominated as the presidential candidate for the antislavery Free-Soil party in 1848, Van Buren argued against “the evils of slavery.”

On the other hand, Van Buren was no saint when it came to race. Early in his political career, he owned an enslaved man by the name of Tom. During his presidential campaign of 1836, Van Buren came out against congressional interference with slavery in the nation’s capital. As civil war threatened to divide the nation toward the end of James Buchanan’s presidency, Van Buren shared the perspective of many proslavery northern Democrats and wished the “slavery agitation,” but not the institution itself, would simply disappear. It was a position that he had held since the Missouri Crisis of 1819.

D’Souza largely ignores Van Buren’s documented views on, and actions regarding, race. Instead, he pushed forward the argument that Van Buren created the Democratic party to perpetuate a racist welfare state. His main piece of evidence for Van Buren’s intentionality in this regard centers on the New Yorker’s 1827 letter to Richmond, Virginia, newspaper editor Thomas Ritchie. In this famous letter, Van Buren outlined his plan to construct what became the Democratic party and the two-party system that persists today. He argued that the original partisanship of the founding era had disintegrated into factionalism, allowing sectional jealousy and antagonism to emerge as a divisive force that threatened the Union. Van Buren’s solution was to create a national party comprising “the planters of the South and the plain Republicans of the north.” “Party attachment in former times furnished a complete antidote for sectional prejudices by producing counteracting feelings,” he argued to Ritchie.

Instead of seeing a fairly straightforward description of political party organization, D’Souza sees Van Buren working to strike a nefarious bargain with proslavery southerners to protect a reprehensible system of exploitative labor. He crafts a story that has Van Buren traveling secretly through the South in the 1820s, skulking in the background as he sought to strike bargains with prominent southerners such as Ritchie and Vice President John C. Calhoun of South Carolina. In D’Souza’s words, Van Buren “was an unscrupulous man in the process of creating an unscrupulous party” (84), and he charges “progressive admirers,” such as historians Robert V. Remini and Ted Widmer, for covering up or excusing Van Buren’s motives, all to mislead an unsuspecting public (83).

At this point, D’Souza reveals his intellectual bankruptcy. What is the evidence for his claim? “We have to tread carefully here,” he cautions, “because nowhere did Van Buren write his idea down.” “If he did,” D’Souza continues, “it must have been in the manuscripts that he–ever the circumspect strategist–subsequently destroyed” (86). So, how does D’Souza know that Van Buren had this idea for creating an urban plantation modeled on the slave plantations of the South? “The idea can be seen in its implementation,” he concludes, which took place via the urban political machine that Van Buren created. This machine “demanded the complete allegiance of organizers and constituents from the state right down to the local level. . . . The machine told them how to vote and required them to campaign for its entire slate during election periods” (87).

Here, D’Souza attributes to Van Buren a number of thoughts that are unsupported by evidence. According to him, Van Buren saw “the distinguishing feature” of immigrant groups as “a clannish solidarity that was based on their origins” (87). The New Yorker also “saw that the slaves, in a parallel if not similar situation, had created precisely this sort of communal solidarity on the plantation” (87). D’Souza then asserts, “from the immigrant yearning for survival and security that he well understood, and from their collective ethnic identity that he carefully observed, Van Buren realized the possibility for creating the same type of enduring dependency he had witnessed on the slave plantation but this time in Northern cities” (87). He concludes, “These clans, Van Buren figured, could then be ruled by Democratic Party bosses who would demand ethnic loyalty in exchange for political patronage” (88).

The historiography of the Jacksonian era, and of U.S. history, bears out D’Souza’s argument that political parties have appealed to immigrants’ ethnic identities in order to bind them to a partisan identity. But what D’Souza imputes to Van Buren in Death of a Nation is something different. He says that Van Buren observed enslaved people on southern plantations and, based on that experience, used his upstate New York political machine–the Albany Regency–to create a parallel experience among immigrants in the northern cities. From that, D’Souza argues, flows the Democratic party’s treatment of non-white voters today. That is a huge claim to hang on zero evidence.

The irony of D’Souza’s portrait of a malevolent Van Buren is that the purported architect of the urban plantation model failed to use his genius to his advantage. Yes, Van Buren won the presidency in 1836, but his victory showed significant weaknesses within the Democratic coalition. He narrowly won Pennsylvania and Virginia, two states that, given D’Souza’s argument, should have been solidly behind Van Buren. Four years later, Van Buren decisively lost his reelection bid to Whig candidate William Henry Harrison in an electoral catastrophe for the Democrats. Seeking another shot at the White House in 1844, Van Buren was unable even to secure the nomination of his party, losing to James K. Polk at the Democratic national convention. For such an alleged mastermind of the urban political machine, Van Buren was an abject failure at making it work in his favor.

Death of a Nation contains many problems, and D’Souza’s flawed presentation of Van Buren is emblematic of the book’s main issue. Since he believes that modern-day Democrats are exploiting race to their political advantage, then it only appears logical, to D’Souza at least, that this alleged racism stems from the party’s origins. In embracing this claim, he wrongly contends that the Democratic and Republican parties of the twenty-first century possess the same ideologies, principles, and motivations as those of their nineteenth-century predecessors. To make this ahistorical argument work, he has to ignore the shifts that have occurred as the two major political parties have developed and transformed. D’Souza’s inability, or unwillingness, to ground his case in actual evidence calls into question his motivation and suggests that he wants to use history as partisan propaganda, not as a way to illuminate the past.