We Need to Address the Problem that Caused the California Conflagration

Stephen J. Pyne is the author of Between Two Fires: A Fire History of Contemporary America and To the Last Smoke, a 9-volume series of regional fire surveys. 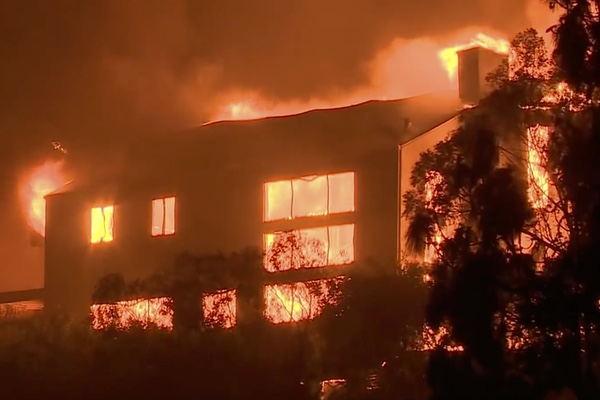 On the night of October 8, 2017 – the eve of National Fire Prevention Day – a swarm of fires broke out in northern California. The resulting ‘fire siege’ burned 245,000 acres, destroyed 8,920 structures, and killed 44 people. On December 4 the siege moved to Southern California, where the six largest fires burned 308,380 acres, 1,375 structures, and took two lives. The northern siege was California’s most damaging on record; the southern had its largest fire, the Thomas. A year later, November 8, another outbreak occurred both north and south. The Woolsey fire burned into Malibu. The Camp fire burned through the town of Paradise, more lethally than any fire in American history since 1918. 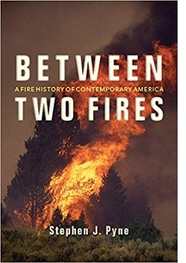 The primary cause in both cases? Powerlines. In the October, 2017 fires CalFire cited PG&E for failure to maintain powerlines in 17 of the most damaging burns. The origin of the Thomas fire is still under investigation, but lawsuits have named Southern California Edison’s powerlines. The Woolsey fire, also under investigation, again has powerlines as a probable cause. And investigators are examining a PG&E powerline near Pulga as a possible suspect for the Camp fire. Of California’s 20 largest fires, lightning accounts for eight; of its 20 most destructive fires, powerline failure is known to have caused four, with another four likely. Earlier, powerlines started major fires in California's 2003 and 2007 fire sieges. California has a problem with sparking.

But this isn’t just a California pathology. The Las Conchas fire, outside Los Alamos – New Mexico’s largest – began when an aspen fell on a powerline. The Bastrop fires outside Austin, Texas had multiple starts when winds toppled trees on lines. The 2016 fires that burned through Gatlinburg, Tennessee began from multiple ignitions kindled from powerlines. Nationally, as in California, lightning accounts for the greatest acreage burned because those fires are typically in the backcountry. Powerlines account for the greatest damage because they start near towns.

Over the long course of Earth history, lightning has been the planet’s overwhelming source of ignition. In the Anthropocene it appears that anthropogenic electricity is taking its place. How we choose to live on the land and how the land chooses to live are colliding.

Trains cast sparks with abandon from smokestacks and brake shoes, and they often did it in landscapes shattered by the axe. Rail made broad, rapid logging and landclearing possible. But it also strewed slash and combustible debris along the right-of-way and as far back as loggers could reach. Then it sprinkled sparks over that fire-readied land. Often towns – all wood, even to sidewalks – dappled the scene. They burned like their surrounding countryside. Railways burned and reburned their right-of-ways and beyond, often to mineral soil. From 1870 to the 1920s, most of the bad burns of American history rode the rails.

The railways were powerful forces for settlement: they remade the national estate and reorganized the national economy. They were engines, literal fire engines, of progress. It was no easy task to take them on in the name of fire protection. But they were also engines for fires.

Even places that lacked a natural disposition to fire suffered. Take the Adirondacks in upstate New York. As rail opened up the mountains, loggers followed. Felling and railroading worked like scissors to cut through the forest, an exercise in industrial-strength slash and burn. In 1903 both trends reached a climax when, amid an unbreakable drought, the fires burned 600,000 acres. Right-of-ways became fuses that carried flame to detonating plateaus of slash. Paradoxically, the railroads were used to bring in extra firefighters and equipment. The new technology created the means to start fires and to help suppress them. But it was far easier to kindle than to contain.

Then what couldn't get worse did. The 1903 season featured spring fires; the 1908 season, fall fires. New York was at the end of a rolling thunder of flame that moved along the U.S.-Canadian border from Washington State to Maine. All the factors that made for big fires in the Adirondacks converged with almost preternatural cunning. Everything reached its peak - drought, logging, railroad construction, the over-extension of the warden system. The fires roared until rain and snow finally quenched them.

The worst single fire broke out near Long Lake West. Its origin makes a perfect symbol of how the disaster occurred. A spark from a Mohawk & Malone locomotive set a fire along the track near the hamlet. The responsible fire warden quickly had 150 men on the scene. The train bringing them to the scene, however, was itself setting new fires. The town of Long Lake West was soon cinders. By September 11 a line of fire stretched 12 miles from Horseshoe to Nehasane. What had been advertised as a self-reinforcing dynamo of progress was becoming a self-reinforcing engine of destruction. The season ended with 380,000 acres, several towns, resorts, and prime tourist sites in ash.

Yet the menace was tamed. Studies were commissioned, failures identified, fixes recommended. New laws were enforced, fines and lawsuits applied economic pressure, engines were compelled to replace coal with oil as fuel, suitable spark arrestors were invented, right-of-ways were cleaned of debris, lines were patrolled. A lot of boring jobs added up. Fire starts declined, and damaging fires plummeted. Locomotives have not been a meaningful source of fire problems for decades.

Today's equivalent is powerlines. The nation's electrical grid has a similar significance to the railroad network in its social, economical, and political power. It makes modern America possible. Yet it illustrates how the built environment can interact with natural landscapes to lethal effects. It's not just that powerlines can start lots of fires, but that they start bad fires because the winds that cause them to fail or that topple trees on them make ideal conditions for explosive conflagrations. The liability issues are such that some companies have threatened to shut down power during major winds rather than face bankrupting lawsuits. Already lawsuits for the 2017 California fires are asking for billions of dollars in damages. The Camp fire, if a powerline proves the cause, could be liable for even more.

Many of the problems of fire management do not have technical fixes. They depend on social choices hammered out in politics – appropriate land use, the purpose of public lands, competing economic interests, cultural values, and philosophies. But mitigating fires started by powerlines is, like stopping the locomotive fire problem, amenable to technological tweaks.

The solution will not lie with a single stroke, but with lots of decisions, inventions, collaborations, and plain boring discussions about how we transmit electricity across the countryside. But it can be done. For years the nation has discussed the value - the necessity - of overhauling our creaky grid. Why not fold fire mitigation into that agenda?

Otherwise the anode of sprawling towns and the cathode of burning countrysides will continue to arc into tragedy. We're relentlessly shrinking the distance between those poles and intensifying the charge. We don't have a technical solution for managing free-burning fire in Yosemite or Yellowstone. We do know how to keep houses and cities from burning and we know how to mitigate powerline sparking. We can't fix all of the nation's fire problems. But we can make progress on this one.