Edward Lengel is the author of Never in Finer Company: The Men of the Great War's Lost Battalion (Da Capo Press, 2018).

Nothing seems more truly American than New York City. A century ago, however, many people feared that it had become a strange, foreign presence in the United States. By the 1910s, waves of immigration from all over the world, but especially central and eastern Europe, had transformed the metropolis into a crazy-quilt fabric of perpetual contrast. Take a walk down any street in lower Manhattan and you would hear several different languages being spoken, see every imaginable outfit, and smell food preparations sufficient to fill a million cookbooks. 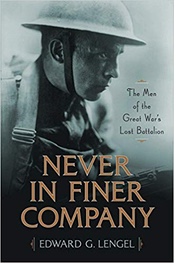 Practically the only common language all New Yorkers could share was that of sports. City-goers loved to watch and discuss baseball, college football, boxing, and horse racing, and they demanded top-notch sportswriters to feed their obsessions. Enter Damon Runyon, reporter for William Randolph Hearst’s New York American. A chain-smoking, wisecracking Coloradoan with piercing eyes and an attentive ear, he wove stories of individual athletes and fans into compelling adventures that everyone could enjoy. In time he developed a knack for tracking down misfit characters from New York’s ever-changing pageant and telling their tales in a uniquely colorful language that came to be called Runyonesque.

In the spring and summer of 1917, shortly after the United States entered World War I, Runyon reported on baseball’s spring training and regular season, finishing with the World Series between the Chicago White Sox and the New York Giants (the Sox won, to New York City’s bitter disappointment). Runyon then moved on to boxing, where he watched and got to know Benny Leonard, the Lightweight Champion of the World.

A poor Jewish kid by origin, Leonard had adopted another Jewish boy named Fly Gilbert from a New York City orphanage and raised him to adulthood. When the United States entered the war, Gilbert was drafted to serve as a private in the 77th “Metropolitan” Division, raised largely from greater New York City. In the fall of 1917, as Runyon watched and reported, Leonard went to the division’s training facility at Camp Upton, Long Island, to train its’ officers (including future Medal of Honor recipients Charles Whittlesey and George McMurtry) how to fight in the boxing ring. Leonard also kept an eye on Gilbert; and when the troops of the 77th Division prepared to fight for combat in France in early 1918, Leonard pulled Runyon aside. If you can get over to France, he told the reporter, be sure to check up on my boy Fly.

Runyon didn’t need any urging. He had been a soldier once himself, in the Spanish-American War, but he hadn’t done any fighting. Instead he had spent his time in the Philippines hanging around the barracks and the streets of Manila, catching stories that he reported in the soldiers’ newspaper. During that time, he had learned how to uncover the common humanity beneath the uniforms. Now, in 1918, Runyon was eager to do the same again—this time for the men and women of the American Expeditionary Forces, and especially for “New York’s Own,” the 77th Division. Runyon didn’t hesitate when, sometime later, his boss William Randolph Hearst gave him the chance to go overseas as a war correspondent.

The 77th got there before him. Although it was an all-draftee division made up largely of men from greater New York City—very many of them recent immigrants who barely spoke English, and some of them not even naturalized American citizens—the 77th was sent quickly to the front. When the Metropolitan Division first moved into the lines, German scouts heard the Doughboys talking in their trenches and thought it was an Italian Division. 77th Division officers like Whittlesey and McMurtry, respectively a successful lawyer and a millionaire stockbroker, worked hard to train the diverse men under their command.

When Runyon arrived in France at the end of September, he learned that the 77th Division had been deployed in the forbidding Argonne Forest, attacking well-entrenched German positions and taking heavy casualties. He made a beeline for the front. One night in early October, Fly Gilbert was sitting in a shell hole amid enemy machine gun and artillery fire when an officer rolled in next to him, followed by Damon Runyon, his natty outfit now covered with mud.

“This guy wants to spend a little time with you and move up farther,” said the officer. “He’s a correspondent.” The officer left as Gilbert disdainfully regarded the reporter. “You’re a sucker,” he drawled. “Go back where it’s comfortable.” Runyon smiled and shook his head. “My name is Runyon of the New York American,” he said. “I’ve got a lot of circulation back home. This is a good story.” In time the two made friends, thanks to Runyon’s jokes and tall tales. Gilbert didn’t learn until later that Benny Leonard had sent Runyon to check up on him.

While he was in the woods, Runyon learned about a group of about six hundred men from the 77th Division who had been cut off behind enemy lines. Led by Major Whittlesey and Captain McMurtry, and known as the Lost Battalion, the force endured constant enemy attacks for five days. On October 8, finally, the Lost Battalion made it out of the forest thanks in part to the exploits of a red-headed young Tennessee corporal with the 82nd Division named Alvin C. York. Runyon rushed to be there as the men walked out of the Argonne.

Runyon first spoke with Major Whittlesey, marveling at how this modest intellectual with glasses perched on his nose above a “funny little smile,” could have led a battalion of New York City’s toughest denizens through such an ordeal. Next he met Captain McMurtry, who was covered with so many wounds, some of them infected, that he could barely move—but who carried a look of vital determination in his eyes. Finally, Runyon went to interview the common soldiers, asking where they came from and how they had lived before and during the war. Once a collection of fruit-cart vendors, elevator operators, dishwashers and small time hoods, these men had learned to depend entirely on each other in the worst possible circumstances and become, each in their own way, heroes. And Runyon knew that the war had forever changed them.

In his first dispatches stateside and other articles that he wrote over the following months before returning to New York City, Runyon told the stories of these men with a drama, flair and affection that emphasized their common humanity. Above all, he showed how their common struggles as soldiers had forged bonds that pointed toward a common identity for the people of the United States. Though some people had doubted their loyalty and commitment to their adopted country, Runyon presented the men of the Lost Battalion as New Yorkers, and Americans all. When they returned to the United States in 1919 after victory had been won, Runyon’s New York American printed a cartoon that represented the feelings of every man, woman and child in the city. It showed the Statue of Liberty leaning over and enveloping the Doughboys in her embrace.