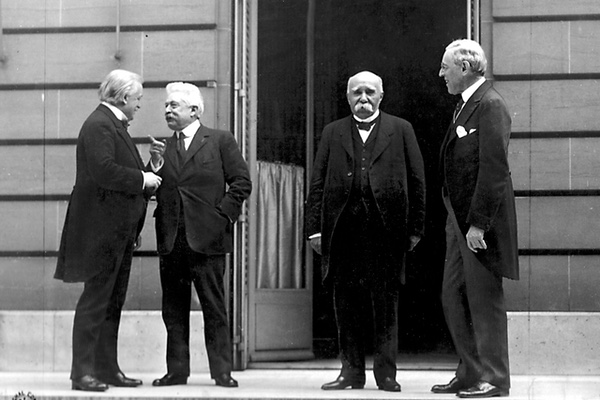 The heads of the "Big Four" nations at the Paris Peace Conference, 27 May 1919. From left to right: David Lloyd George, Vittorio Orlando, Georges Clemenceau, and Woodrow Wilson

November 11, 2018 marks the hundredth anniversary of the armistice that ended the fighting in World War I. This is a good time to reflect on the leadership of Woodrow Wilson, the American president who tried to create a lasting peace out of that cease-fire. Unfortunately, negotiations in Paris in 1919-1920 did not produce the result he sought. A larger and more destructive global conflict erupted two decades later.

Does President Wilson bear some responsibility for the crisis that followed? Since he arrived at the peace talks with worldwide popularity, did Wilson fail to wield his influence effectively? Or, were the obstacles so daunting that just about any American president would find it nearly impossible to shape a long-lasting peace?

Woodrow Wilson has received generally high grades for presidential leadership in surveys of historians, political scientists, and biographers. In 2018 scholars ranked Wilson eleventh among forty-five presidents. Wilson deserves praise for shepherding important progressive legislation through Congress and for articulating idealistic war aims through his Fourteen Points, but he stumbled badly when negotiating with America’s allies in Paris and members of the U.S. Congress in Washington. The story of his last two years in office is a tragic account of frustration and failure.

It should be noted, however, that President Wilson faced daunting challenges when negotiating at the Paris peace conference. Prior to America’s entry in the war, Wilson had called for a generous “peace without victory.” He hoped the victors would not punish the losers harshly. But leaders in Paris representing France, Britain and Italy demanded the spoils of victory. Their tough position was not surprising. European soldiers and sailors had been in the war much longer than U.S. forces and experienced much greater losses. Europe’s negotiators wanted territorial control, substantial monetary compensation, and acceptance of “war guilt clause” by Germany. Wilson reluctantly agreed to many of the allies’ terms. He placed hope for a better future in the work of a new organization, the League of Nations.

President Wilson failed to secure U.S. membership in the League of Nations, but even if he had succeeded, an American-backed League might, nevertheless, have been ineffective in confronting aggression. In the Twenties and Thirties, many Americans favored limited U.S. engagement in global affairs. They distrusted the kind of sustained international involvement that President Wilson championed. Isolationist sentiment was strong in America, and citizens in Britain and France were slow to confront the emerging threats as well.

Resistance to international cooperation was, indeed, difficult to achieve at the time, but were the obstacles insurmountable? Did Woodrow Wilson have the potential to drive a harder bargain in the peace negotiations? Could he have done a better job negotiating with members of Congress? Was a stronger U.S. commitment to collective security possible? Did the president miss opportunities to build the foundation for a safer future?

Woodrow Wilson possessed more leverage in dealing with the European allies than is commonly acknowledged. The president began his trip to Paris with enormous emotional support both in the United States and in Europe. Huge crowds gave him a noisy sendoff when his ship left the United States, and millions welcomed him as a hero when he traveled in Europe.

Wilson’s influence at that time involved more than just international popularity. The United States had emerged from the war much richer and more powerful than other nations at the conference. The president had impressive financial clout to wield at the negotiations in Paris. The U.S. government and private American bankers had loaned the allies more than $10 billion. Wilson could have offered plans to forgive portions of that huge debt in return for acceptance of his wartime goal of achieving a just peace.

John Maynard Keynes, later a famous economist, presented some insightful observations on opportunities missed by Wilson and others in a book published in 1919, The Economic Consequences of the Peace. Keynes, who attended the peace conference, complained that Wilson capitulated when the allies insisted that Germany pay huge reparations. John Maynard Keynes warned that the harsh peace settlement would bring misery to the German people. Resentments could lead to another world war. A far better approach to advancing peace, argued Keynes, was to promote German prosperity (after World War II, the U.S. supported such a program, the Marshall Plan).

Wilson was ineffective in Paris in large part because he insisted on dominating U.S. negotiations. The president did not seek much help from diplomats in his State Department, and he selected minor figures for his team of delegates. An exception was “Colonel” Edward House, a close friend and brilliant adviser. But Wilson turned angry when House negotiated in Wilson’s absence, and the friendship disintegrated. President Wilson did not appoint U.S. senators or current Republican leaders to the delegation. He aimed to wield extensive personal control over deliberations. Key European leaders found Wilson haughty, self-righteous, and egotistical. Eventually they out-maneuvered the over-burdened American president.

Obstinacy became a glaring problem when President Wilson tried to commit the U.S. Congress to a peace treaty and membership in the League of Nations. A wise leader would have recognized that the political situation favored negotiation. Republicans had won control of both the Senate and the House in the 1918 midterm elections. American commitment to a peace treaty required 2/3 approval in the Senate. There were fourteen “irreconcilables,” and other senators had “reservations.” Democratic leaders urged Wilson to work a deal. The president vowed to “make no compromise or concession of any kind.” He demanded compliance, even though senators raised legitimate questions about provisions in the treaty and plans for the League that might threaten American sovereignty.

President Wilson decided to go over the heads of U.S. senators and take his case directly to the American people. A strenuous schedule of cross-country speech-making strained his health. Eventually he suffered a massive stroke. Wilson was partially paralyzed. Throughout the rest of his presidency, from September 1919 to March 1921, he had minimal contact with political leaders. His wife, a bright woman who lacked political experience, described his wishes to officials and legislators. In many respects, Edith Wilson served as an unelected Chief Executive.

Not surprisingly, Wilson’s inflexibility contributed to the defeat of his cause. The United States did not ratify the Treaty of Versailles or join the League of Nations. Perhaps a healthier and more tactful president could have employed U.S. financial leverage more effectively in Paris, beating back the Europeans’ mistaken demand that Germany pay $33 billion in reparations. Perhaps an astute president could have negotiated more effectively with Congress, securing greater U.S. commitment to collective security.

We cannot know if human progress would have been substantially better if a different leader had been guiding U.S. policy in the aftermath of World War I. What we do know is that Woodrow Wilson was increasingly debilitated and ineffective at a crucial time in global history. The record of Wilson’s flawed decision-making in 1919-1920 suggests that his near-great ranking among the American presidents should be a matter of debate.