Christine Haynes is Associate Professor of History, University of North Carolina at Charlotte, and author of the newly published book, Our Friends the Enemies: The Occupation of France after Napoleon (Harvard University Press, 2018).

This Sunday marks the hundredth anniversary of the armistice between the opponents in the Great War, or what—following another total world-wide war only two decades later—would come to be called World War I. The centenary of Armistice Day, now Veterans Day in the United States, serves as a reminder of the difficulty of ending war. As the prime minister of France Georges Clemenceau commented during negotiation of the Treaty of Versailles to resolve the conflict: “It is much easier to make war than peace.” In fact, this “peace” disappointed and embittered not just the Germans, but many others in the collapsed empires of central and eastern Europe, bequeathing a complicated and destructive legacy for much of the rest of the twentieth century and even still today. 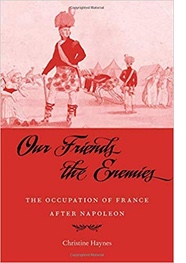 The peace of 1918-1919 failed for many, complex reasons. But its architects may be faulted for neglecting to consider previous models of peacemaking. Such a model existed just over a hundred years earlier, in the settlement to end the revolutionary and Napoleonic wars following the Battle of Waterloo on 18 June 1815. Although a study of the Congress of Vienna of 1814-1815 was commissioned by the British Foreign Office in 1919, it was ignored during the negotiations at Versailles. Of course, the democratic governments responsible for making peace in the aftermath of the Great War faced even more challenges—in many more nations—than the autocratic leaders who negotiated a settlement for Europe and its overseas colonies following the defeat of Napoleon. Nonetheless, they could have learned a lot from the approach to peacemaking adopted by the Allies against Napoleon in 1815, which succeeded in rehabilitating the defeated nation and securing continent-wide peace for almost a century. Although it has been overshadowed by the dramatic events of the twentieth century, the post-Napoleonic settlement still has much to teach us about how to make peace today.

In 1815, the Congress of Vienna was just one part of a larger post-war settlement. Interrupted by the return of Napoleon from exile that spring, it was supplemented by a Second Treaty of Paris, imposed by the Allied powers on the defeated French in November 1815, little more than a year after a First Treaty of Paris following the initial defeat of Napoleon in March 1814. This new treaty introduced three institutions that revolutionized peacemaking:

*Establishment of a multinational “occupation of guarantee” against revolution, consisting of 150,000 men around eighteen garrison towns along the northeastern frontier of France under the command of British general Duke of Wellington, for up to five years

*Imposition of financial indemnities to repair the damages (rather than just reward the victors) of war, payment of which was a condition of liberation from occupation

*Creation of a Council of Allied Ambassadors, which met regularly in Paris to monitor government and ensure reform in the defeated country.

The stipulations of the Second Treaty of Paris were intended to ensure “proper indemnities for the past and solid guarantees for the future.” While this settlement was not necessarily democratic, it was relatively liberal in its goal to reconstruct the defeated nation and reincorporate it into the community of nations. As its main architect, the Duke of Wellington, explained to the British foreign minister Lord Castlereagh in August 1815: “These measures will not only give us, during the period of occupation, all the military security which could be expected from the permanent cession [of territory], but, if carried into execution in the spirit in which they are conceived, they are in themselves the bond of peace.”

Under the leadership of Wellington, the post-Napoleonic settlement worked to re-stabilize the defeated power, within a very short period of time. The occupation of guarantee, financial reparations, and Allied Council of Ambassadors combined to encourage the French government, and people to forge a moderate path between revolution and counter-revolution. Under pressure from the Council of Allied Ambassadors, the restored monarchy dissolved the ultra-royalist legislature, enabling a number of important liberal reforms, regarding elections, military recruitment, the press, and the budget, which was crucial for financing the payments due to the Allies. In an effort to end the peace

keeping occupation as quickly as possible, the French paid off the reparations owed to the Allies—which, it should be noted, were significantly higher relative to GDP than those imposed on Germany by the Treaty of Versailles—two years ahead of schedule, paving the way for liberation of their territory in November 1818.

Focused on clear goals of ensuring financial indemnification and political stability, the Second Treaty of Paris constituted one of the most successful cases of war termination ever. Following the breakdown of the Napoleonic Empire, the Allied victors developed new institutions not just to contain but also to reconstruct the defeated power as well as bind themselves to each other. Aside from contained conflicts such as the Crimean War and the German Wars of Unification, the Congress System prevented continent-wide war until the outbreak of the Great War in August 1914.

In the aftermath of that new total war, this precedent was overlooked by the victors at great expense. Only after another, even more devastating, total war would the Allies—led by a new superpower, the United States—take a similarly progressive approach to peacemaking. Since 1945, this approach, centered on international cooperation, especially in the institutions of what is now called the European Union, has kept the continent at peace. Recently, however, the ghosts of the settlement of 1919—particularly, virulent nationalism—have returned to haunt Europe. To lay them permanently to rest will require renewing our commitment to Wellington’s goal of the “bond of peace.”