How Do Trump’s Attacks on the Media Stack Up Against Nixon’s?

Donne Levy is a retired college instructor in US History, Asian History, and Western Civilization. 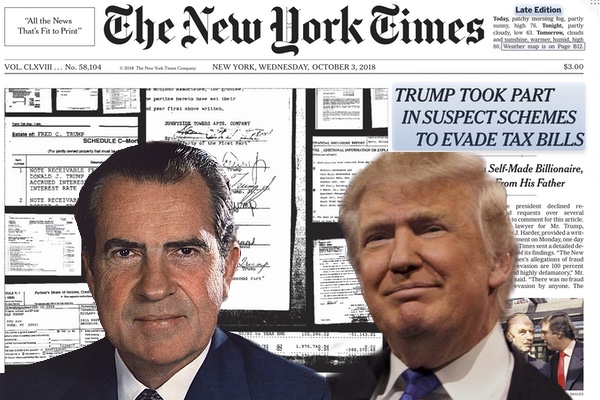 Thomas Jefferson stated, “Liberty depends on the freedom of the press and that cannot be limited without being lost.” He went on to say that his preference was for a free press without government rather than government with no free press. Despite the extreme endorsement of a free press by one of our most revered of Founding Fathers, many presidents have been highly critical of the free press and some including Jefferson have taken action to limit the free press.

No president’s rhetoric has been angrier against the free press than Donald Trump, but that sentiment is not new. Fifty years ago a president was elected who also had strong differences with the free press and took action accordingly. It is worthwhile to compare the similarities and differences of Donald Trump with Richard Nixon and by doing so make some assessment as to whether we are in danger of losing the free press

With a history of hostility toward the press, Nixon narrowly won the presidency in 1968. He blamed the press for his presidential defeat in 1960 and his loss in the California gubernatorial election of 1962. Speaking to the press the morning after his California defeat, Nixon declared, “Gentlemen, you won’t have Nixon to kick around anymore.” However in his 1968 comeback, Nixon received a fairly favorable or objective treatment from the press as the “New Nixon” with a plan to end the Vietnam War.

The Nixon relationship with the press would soon turn sour. Ten months after his inauguration, no plan to end the war had come into sight as the conflict ground on. Television networks began giving critical analyses immediately following Nixon’s nationwide televised speeches. Newspaper columnists, the so called Eastern privileged liberals that Nixon had long-railed against, turned critical of the administration.

Nixon moved against the free press first by unleashing Spiro Agnew, his vice-president. In a November 1969 speech, Agnew called television news people, “a closed and tiny fraternity of privileged men elected by no one and enjoying a monopoly sanctioned and licensed by government.”

That was just the first of Nixon’s attacks on the free press. He had the Department of Justice file antitrust charges against the three television networks and threatened to revoke television station licenses by manipulating the FCC. During the Watergate investigation, White House Special Assistant Jack Caulfield testified about illegal wiretaps placed on journalists such as columnist Joseph Kraft. In the Senate Watergate hearings the American people learned of an “enemies list” kept by the White House that included journalists. On the White House tapes Americans heard Nixon speak of moving against those on the enemies list by using the IRS among other institutions of government. On the tapes White House Counsel John Dean called that “an exciting prospect.”

It is abundantly clear that Nixon intended to attack the free press more ferociously in his second term. But the Watergate cover-up collapsed in the spring of 1973, saving the nation from a war between the presidency and a free press. No one knows who would have won.

In comparing Trump with Nixon and their attacks on the free press, one must consider their major differences and also the fact that their presidencies came in different eras. Nixon seemingly lived and breathed politics. He was admittedly bored in private law practice. Trump, after inheriting huge wealth from his father, thrived in a business world where he could make headlines and put his name on everything from buildings to airplanes. Unlike Nixon, his relationship with the press was mostly friendly before entering politics as he used journalists to promote his business ventures and even enjoyed being talked about in the gossip columns. Trump showed little detailed familiarity with politics, though he occasionally piped up about events in the news, such as the Central Park attack on a white jogger.

Sometime around 2011, Trump began thinking of the presidency as a form of extreme self-promotion. That is when he gained national attention by insinuating that President Obama was born in Kenya. On June 16, 2015, Trump began his political career by announcing his presidential candidacy.

Immediately, a hostile relationship between Trump and segments of the free press was born. The mainstream press ridiculed Trump’s idea of building a 10,000 mile wall between the U.S. and Mexico and called him out for referring to Mexicans who have crossed the border as “murderers” and “rapists.” The press also reported about his many lies such as his claim that thousands of Muslims cheered the collapse of the twin-towers on 9/11.

This hostility between Trump and the free press has continued since his inauguration. The press has done its duty reporting chaos in the administration, corruption at the EPA, Trump’s numerous lies, and his reluctance to damn Russia for interference in the 2016 election.

Trump’s reaction to the press is strikingly similar to Nixon’s. Both attacked the press with Trump going so far as to calling the media “the enemy of the people” and the “fake press.” Nixon was generally more circumspect in public regarding the press. He had his vice-president use the more extreme rhetoric. Both men claimed to be the target of a vindictive press opposed to their administrations. Like Nixon, Trump threatened to revoke the licenses of television stations.

However Trump is facing a news media different from the Nixon era. With a proliferation of cable channels and social media, it is far more difficult to intimidate our vast press as Nixon tried to do. Trump’s prime television targets, CNN and MSNBC, are viewed favorably by many Americans. Unlike Nixon, Trump has Fox News, but with a conservative national news channel it is harder for Trump to make the charge that the news media are all against him. Trump has not ordered the attorney general to wiretap journalists as Nixon did. But with this president, the danger is always present.

As for the future, Trump undoubtedly will continue his attacks on the free press and may turn his aggressive rhetoric into action. It is up to the American people and their elected officials especially in Congress to preserve what Jefferson considered our most important freedom.