William Lambers is an author who partnered with the UN World Food Program on the book Ending World Hunger. His writings have been published by HuffPost, the Hill, Newsweek and many other media outlets. 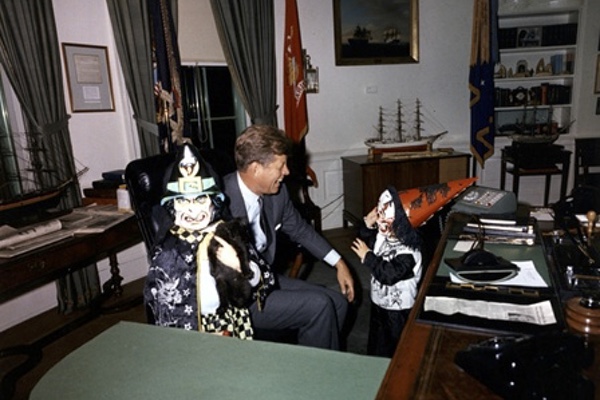 When Halloween came around in 1960 John F. Kennedy, while campaigning for president, came across a unique trick or treat event. This ghoulish party was not about collecting candy but instead raising money for the UN agency fighting child hunger and disease-UNICEF.

JFK loved it! Kennedy remarked at a shopping plaza in Willow Grove where the UNICEF party took place, "I think that is in the best tradition of this country’s humane and sympathetic effort." Kennedy continued speaking about fighting hunger and disease in his short speech.

In fact, when JFK became president he even issued a statement from the White House in support of Halloween trick or treat for UNICEF. Kennedy said "UNICEF has caught the imagination of our people--especially our nation's children whose Halloween collections have become a symbol of concern and an expression of tangible aid."

Kennedy thought it was a great way for children to spend Halloween, helping others by collecting donations for the poor.

Let hope this year's trick or treaters also have an epiphany like JFK and support a Humanitarian Halloween. On Halloween we could fight child hunger at home or abroad.

Halloween brings about great creativity with costumes and ways to celebrate the ghostly occasion. Think what a difference it could make if that same innovation goes toward fundraising to fight world hunger on Halloween night. There are plenty of places that need help. Syria, Yemen, the Sahel Region of Africa and other regions with extreme food shortages from war and natural disasters.

Think of South Sudan where 6.1 million people are facing an extreme hunger emergency. The UN World Food Program (WFP), UNICEF, and the Food and Agriculture Organization (FAO) recently sent out a warning about the East African nation.

South Sudan is bordering on starvation because of a civil war. Pierre Vauthier, of the FAO, says “The only thing standing between the people of South Sudan and widespread starvation right now is the massive humanitarian assistance.”

Any chance of a peace deal to end the war will have to be supported by food aid. You cannot win peace on empty stomachs.

Donor support from the public and government is critical to make this life-saving food aid possible. Even a tiny portion of Halloween spending could ensure food for South Sudan in the year to come.

One part of Halloween night is the famous Reese's Peanut Butter Cup. When you see it, think of another peanut product called Plumpy'Nut. This enriched peanut paste is given to starving children in developing countries. It saves them from deadly malnutrition.

Halloween could be used to collect donations so every malnourished child can receive life-saving food.

If you fight hunger on Halloween you can also make a powerful statement to encourage others, including government leaders, to do the same.

JFK was inspired as president to do more with foreign aid. Kennedy expanded the U.S. Food for Peace program as a major part of his foreign policy. Whereas President Trump has done the opposite, threatening to eliminate Food for Peace in his first two budgets submitted to Congress. Trump has tried to reduce funding for overall food aid.

Instead a better plan would be to follow JFK’s lead and increase food aid to fight hunger around the globe.  Halloween night can actually be part of this effort, to raise money for humanitarian agencies and influence others to join the struggle. Show that you care.

Halloween’s night of fun can mean so much more if we make fighting hunger a part of the celebration. By using your imagination you can make a difference in ending the scariest of threats-world hunger.