Review of Francis Fukuyama’s “Identity: The Demand for Dignity and the Politics of Resentment”

James Thornton Harris is an independent historian and a regular contributor to the History News Network. For more information see www.JamesThorntonHarris.com 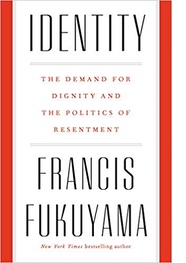 Francis Fukuyama is not one to shy away from large concepts. He achieved worldwide attention in 1993 for his book, The End of History and the Last Man. He argued that with the collapse of the Soviet Union and end of the Cold War, we had reached the final stage of global ideological evolution and that western liberal democracy was on the verge of a permanent triumph throughout the world (i.e., the end of “history”).

Fukuyama then followed up with more ambitious works including, The Great Disruption: Human Nature and the Reconstitution of Social Order (1999) and Our Posthuman Future: Consequences of the Biotechnology Revolution (2002). The author, a Harvard PhD. holder, briefly advised the Reagan Administration in the 1980s, but now serves as a senior fellow at Stanford University’s Freeman Spogli Institute for International Studies. In 2008, he supported the election of Barack Obama and, as demonstrated in his current book, been consistently opposed to populism and immigrant bashing.

His latest work tackles another big idea, human identity, and contains a serious warning about the rise of nationalism and racism around the world, particularly in the United States and Europe.

While other authors examining the rise of populism might cite economic statistics and voting trends to make their case, Fukuyama instead quotes widely from Socrates, Plato, Hegel, Marcuse and Nietzsche.

Fukuyama sees citizen identification with their own nation state as an important part of liberal democracy. In contrast to most progressive leaders, he does not view multiculturalism and the celebration of different ethnicities and sexual orientation as a step forward to more personal freedom. Instead, he sees these new demands for individual identity as destabilizing to modern nation states.

Fukuyama states that “demand for recognition of one’s identity is a master concept that unifies much of what is going on in world politics today.”

This demand for recognition of individual identity, whether based on race, religion or gender, has been accelerated by the explosion in international trade and travel and the rise of the Internet and social media. The latter communication tools have “facilitated the emergence of self-contained communities, walled off not by physical barriers but by belief in shared identity.”

Fukuyama argues that the left has made a serious mistake in abandoning its traditional concerns with demanding economic equality and worker protections in favor of promoting “a wide variety of groups perceived as being marginalized…blacks, immigrants, women, the LGBT community.” In response, the right in many countries redefined itself as “patriots who seek to protect traditional national identity.”

One result is the rise of conservative governments that seek to socially ostracize or even physically expel minority populations.

What actions can liberal democracies take to protect minorities while strengthening their traditional freedoms?

Fukuyama proposes the development of “creedal national identities.” In this scenario, individuals would strongly identify with the “core values” in their country rather than on “shared personal characteristics.”

Fukuyama believes that the United States is ahead of many countries by requiring citizenship tests that include a basic knowledge of English, an understanding of the nation’s history and democratic principles. Many European countries do not impose similar requirements for citizenship. Instead, the European Union has encouraged “multiculturalism” and “downplayed the importance of integrating immigrants” into a specific “national culture” that emphasizes that country’s history and democratic values.

To help readers understand the drive for identity in Western Civilization, Fukuyama coins two new terms, both based on the Greek word thymos, which he explains as “the part of the soul that craves recognition or dignity.”

His first term isothymia, he defines as “the demand to be respected on an equal basis with other people.”

His second new word, megalothymia, is “the desire to be recognized as superior.”

The tension between these two drives is present in all liberal democracies, which seek to deliver equal respect to all individuals. In practice, many groups, particularly religious or ethnic minorities, can feel marginalized or denigrated by the ruling majority.

Megalothymia becomes a major problem when an aggressive majority group takes power and seeks to socially ostracize or even exterminate a minority group. Nazi Germany is the ultimate expression of this trend in the 20th century.

Fukuyama follows up his examination of identity politics with a series of recommendations. The title of his last chapter, “What Is to be Done?” is an ironic reference (he is no Marxist) to Lenin’s famous 1902 political pamphlet.

In the United States, progressives should “adopt an assimilationist agenda.” This would include “strengthening external borders” while providing a clear path to citizenship for the 12 million undocumented men and women now in the country. He also wants public education to phase-out bilingual education and focus on teaching all students English language skills. He cites the “thirteen different languages taught in the New York City schools” as a divisive factor, weakening a national identity and fostering segregated communities.

Fukuyama also proposes universal national service for all young people, as a “powerful way of integrating newcomers into the national culture.”

He chastises the Democratic Party and progressives in general for “undermining the legitimacy of the American national story” by suggesting that racism and gender discrimination are “intrinsic to the country’s DNA.”

This has allowed the Republican Party and other conservative ideologues to redefine themselves as “patriots who seek to protect national identify.”

While universal national service is not likely to show up on any Democratic candidate agendas, many do seem to be emphasizing economic issues like a higher minimum wage and “Medicare for all.”

Whether you agree with his solutions or not, Fukuyama’s analysis is insightful and provides plenty of food for thought. It is a welcome antidote to the many pessimistic, hand-wringing books now appearing about the rise of Trump.