D. M. Giangreco is the author of The Soldier from Independence: A Military Biography of Harry Truman,Vol. 1, 1906-1919 newly released in paperback by Potomac Books. Giangreco served at the U.S. Army Command and General Staff College, Fort Leavenworth, Kansas, for more than 20 years as an editor at Military Review then with the Foreign Military Studies Office at Leavenworth. He is an award-winning author of 13 books. 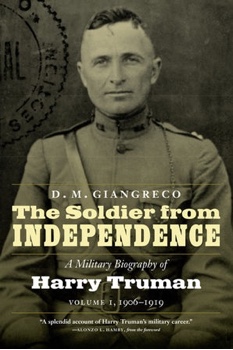 The following is principally derived from D. M. Giangreco’s speech at the Frank Lloyd Wright Monona Terrace Convention Center, Madison, Wisconsin, sponsored by the Wisconsin Veterans Museum and Department of Veterans Affairs, and other presentations.

Common wisdom among historians holds that everything that could reasonably be said about Harry Truman’s service during his World War I has been said since little useful information exists on his actions during combat outside of one regimental history, some post-war notes, Truman’s letters to his wife from when he managed the regiment’s canteen during training, and the oft repeated stories of several Battery D members who remained life-long friends. But this isn’t true. Which brings me to the Meuse-Argonne offensive.

During the opening phase of the offensive which began 100 years ago on September 26, 1918, the long line of American combat divisions that stretched from the center of the attack east to the Meuse River all advanced more or less abreast. This was not true, however, on the left flank where the Argonne Forest reached almost all the way up to the bluffs along the west bank of the Aire River. Here the 28th Division’s lines were bent far back to the rear beyond the left of its hard-charging 110th Infantry Regiment because of the division’s other regiments’ inability to make much progress in the dense forest.

The situation was even worse on the 28th’s left where the New York National Guardsmen of the 77th Division made no gains at all for a time, with the result that the western third of the American line resembled a descending staircase with the 110th as the top step. From September 26 - 29th, this “staircase” on the left generally moved apace with the Pennsylvania Guardsmen of the 110th Infantry and the Missouri-Kansas Guardsmen of the 35th Division to their right across the Aire.

This came as no surprise to any of the senior commanders in the American Expeditionary Force, or AEF, since the campaign plan did not call for a strong effort against the forest defenses. The mission of the 35th Division and part of the 28th was to plunge north as far and as fast as possible to the right of the obstacle so that the Germans in the Argonne would be compelled to withdraw on their own rather than risk being cut off. But as the Romans had learned in the time of Caesar (and the Allies would learn in the Ardennes two decades hence), the Germans were not shy about pushing forces into such terrain and fighting it out.

Road congestion that hampered the movement of the 28th’s artillery – and restrictions imposed to prevent the accidental killing of U.S. troops by their own guns – resulted in almost no American and French shells falling into the wide expanse of forest on the 35th Division’s ever-lengthening, left flank until the fourth day of the assault; a flank that, despite the presence of the 110th Infantry, was completely open to German observation and directed fire.

What was the German reaction to this gift along the 35th’s flank? According to the German XVI Corps chief of staff, Major Herman von Giehrl, they did not withdraw for fear of encirclement and capture. Instead, they poured a significant amount of their available light artillery into the area to ensure that the “enemy infantry suffered particularly from the flanking fire of thirteen field batteries, which, from their position on the eastern edge of the Argonne, constantly held up the advance.”

The battlefield typography tended to mask the Pennsylvanians down in the river valley from enemy artillery observers, and the dastardly “Huns,” displaying no respect for American divisional boundaries, directed a murderous fire over their heads and into the 35th, whose infantry regiments frequently complained of being shelled by their own units because a significant amount of this German fire was coming not just from their flank, but also literally behind them. As for the 110th Infantry and the rest of the 28th Division, it was several days before the Pennsylvanians fought their way into higher ground and began to receive their full share of Teutonic abuse.

The German Army’s firm determination to block the drive up the key Aire Valley was made painfully evident by their shifting of more and more forces, including elite Guards divisions, to its defense. In all, the 27,000-man 35th Division lost nearly 7,300 men during six – really four – days of fighting. A total of 1,126 killed or died of wounds; 4,877 severely wounded; with the balance less badly wounded or suffering from combat fatigue with many eventually returned to duty. This four-day average of nearly 2,000 casualties every 24 hours represents one of the highest daily loss rates of any US division during the war. By contrast, the loss rate of formations on its flanks was under 400 men per day. The 28th Division suffered 2,916 casualties in eight days of combat (September 26 – October 3), and the 91st on the 35th’s right experienced 4,735 over 12 days (September 26 – October 7).

The same artillery that wracked the Missouri and Kansas Guardsmen was still active when the veteran 1st Division was rushed forward to take over the sector from the depleted 35th Division, and the nearly unimpeded use of these guns on the Big Red 1’s left flank inflicted most of its dead and wounded. The 1st Division initially reported 9,186 men lost before being pulled out on October 12, and although this number was later adjusted down to 6,629 (reputedly by removing gassed soldiers from the accounting), the 1st and 35th’s 14,000 to 16,500 casualties – roughly one of every eight soldiers who fell in the Meuse-Argonne – make the few miles from the Varennes-Cheppy area through the town of Exermont and Hill 240 the AEF’s most bloody ground of the war.

Just how such a terrible loss rate came about was a subject of intense interest and debate within both the press and Army-wide journals after the war and sparked Congressional hearings. Said one of Harry Truman’s colleagues in a Kansas City newspaper: "Somewhere there is a man who is responsible for all that. The buck can be passed just so far but there is always a last man."

But what does this have to do with Truman? As a battery commander, Truman was on the receiving end of all battalion and regimental orders. In addition, his unique position meant that he was the man responsible for carrying out those orders. A detailed examination of the Truman Library’s holdings of battery and battalion paperwork, including operations orders and after action reports, reveals that the material contained in his letters to his wife were highly sanitized. This will certainly not come as a surprise to the people in this room. And the extremely large number of his fellow 35th Division veterans who cast votes for him in a series of county and, ultimately, federal elections understood well their shared experiences.

When combined with a close examination of approximately 200 pages of Truman’s hand-written notes, the extensive oral histories of his soldiers, and the records of other commanders in his battalion – all set against the 35th division’s operations – an extremely rich picture emerges of the future president’s time in combat.

During the Meuse Argonne Offensive, Truman’s battery was frequently employed well forward with virtually all of the 35th’s casualties occurring within two to three miles of Truman’s artillery battery as it moved forward through the shredded battlefield and went about its deadly work. He was detailed to provide fire support for Colonel George S. Patton’s tank brigade during the initial lunge forward, engaged German field guns, and was credited with either wiping out or forcing the permanent abandonment of two complete German batteries. When firing on these and other targets, he disobeyed orders and fired "out of sector" against threats to his division’s wide open flank. Truman’s Missouri and Kansas Guardsmen suffered serious losses in that battle, and the battery of the man who would later order the dropping of the atomic bombs was sited approximately 150 yards forward of where Patton was shot down in an area referred to by one soldier as "a cemetery of unburied dead."

There was a perfectly good reason for the standing order not to fire into the path of another division’s advance, but there were no US units anywhere near the German’s battering the 35th Division. Truman firing into the neighboring 28th’s sector immediately prompted his regimental commander to threaten him with courts-martial if he did so again. Nevertheless, the Germans were still in-place and unmolested as they savaged the Americans on the east side of the river.

So what was the future president’s response? Truman left for his forward observation post before first light the next morning, D+2, and that when at 9:00 am he spotted Germans setting up their own observation post at an abandoned mill allowing an unobstructed view of the 35th Division’s entire rear area– and smack in the middle of the 28th’s sector – he promptly called down battery fire and destroyed it. Two hours later he observed a battery moving out of position nearby and forced its permanent abandonment along an exposed stretch of road after a short, intense bombardment. So much for threats of courts-martial.

Although Truman and his men had removed two batteries from the German’s order of battle, the 35th was still suffering grievously. Greatly concerned about the division’s situation, the AEF commander himself, General John J. Pershing went forward that very day to observe for himself what was going on; a move which, incidentally, prompted Military Police in the 28th’s sector to shut down nearly all road traffic for nearly three hours, prolonging that division’s delay in pushing its artillery forward.

The 35th Division commander, Major General Peter Traub, detailed the terrible flanking fire from the Argonne Forest across the river and explained that he was unable to respond because of the First Army’s standing order which forbid divisions firing on points outside of their own area. An aghast Pershing responded: "But surely you do not obey that order?" From that point on, the 35th’s artillery was allowed to engage in observed fire in the 28’s sector but the damage had already been done by allowing the German guns to deploy unhindered and in force.

The 35th’s D+3 assault on Exermont was thrown back with great losses and German counterattacks nearly succeeded in breaking the weakened American lines. As for Truman’s time in the Muese-Argonne, experiencing air and artillery attacks on his positions, directing fire, setting up his anti-aircraft machine guns for use against infantry during the German counterattack – all this will certainly tempt some to engage in a questionable psychoanalysis of how it must have affected his later thinking on the atom bomb.

Risky business, this psychobabble stuff, and I’m sure not going to do it. But I think I’m on safe ground with two simple observations: First, Truman’s activities during the war, were far more interesting and complex than previously realized, and second, the man who later ordered the invasion of Japan in the face of massive casualty estimates understood exactly what he was asking of our soldiers, sailors and Marines, and he understood it at a level that most Americans today would find unfathomable. Truman knew as only one who had lived and fought for six days in a "cemetery of unburied dead" could.