The Retired Historian Who Writes Travel Books in Rome 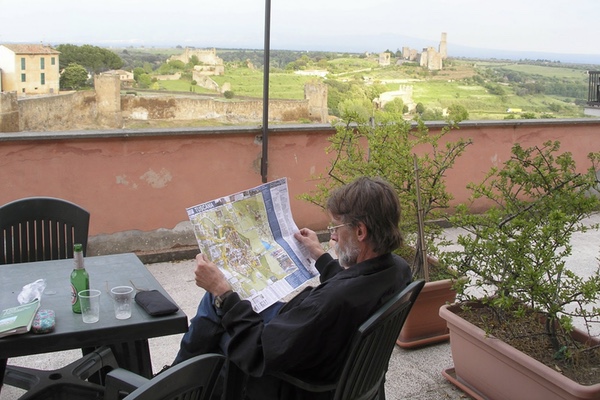 Selling encyclopedias in Chicago isn’t a job everyone can say they did as a kid. One of the closing lines salesmen were taught to say was: “If you were to purchase this set, which free gift would you like?”

The idea was to get the customer interested in blenders and toasters and then to start signing them up for the encyclopedia. William Graebner, professor emeritus of history at The State University of New York at Fredonia, was a teenager at the time that he drove a salesman around Chicago and watched him sell Britannicas with super-thin, extra-durable paper.

He grew up in Des Plaines, Illinois, and his father was on the school board. At 15, he was a summer custodian for the public schools, where he’d paint bicycle racks, clean gum from the underside of desks, and wash floors. He worked with older custodians for five years, and they’d tell him one of their favorite phrases: “Well, we didn’t do much today but we’ll give it hell tomorrow!”

Graebner is a self-described ‘library rat’ and he always has been, he says. The perfect place to be was at the University of Illinois where he got his PhD in history in 1970, where there was an enormous library featuring an archive related to coal mining, a topic he wrote his dissertation on, which later won the Organization of American Historians’ Frederick Jackson Turner Prize in 1975.

“I was astonished! I ran down the street to a friend of mine, anxious to tell him and my wife and others that this had happened. It was a glorious moment,” Graebner said.

The late 1960s was powerful for him, with its deeply transformative swirl of ideas, and so he was “perfectly satisfied” with the period he grew up in. “What could you have wanted more than that as a background for history?”

He got out of graduate school and there were no jobs. He applied for the University of Illinois Press as a copy editor but didn’t get the position. You can’t predict what’s going to happen in life, Graebner says. After writing 500 letters to colleges and universities all over the country, he got one “lucky” job offer at Fredonia in 1971.

“Life is complex. Serendipity, chance, fate – all these things, and not just hard work, combine to produce a career.”

He and his wife, Dianne, settled down in Buffalo, NY, and lived an hour away from the college where he taught at and she joined the city’s biggest law firm, eventually becoming a managing partner. Their lives became embedded in Buffalo.

Graebner certainly didn’t expect to be fired from Fredonia in 1975 when the history department decided there were too many Americanists on the faculty, and the two most recent hires in the American history field were fired.

He sought legal action and contested the firing, but at some point, a senior Americanist left and there was a job opening, so he and his lawyer argued that the college was obligated to hire one of the two, and he was rehired.

The experience traumatized him, threatening his whole career for months. It drove him away from the department. He continued teaching and his work as a professor kept him busy, but in other respects, he turned away from Fredonia.

He became the chair of the department for about five years in the late 1990s, at a time when he was having trouble finding something interesting to write about, and thought, “Why not be chair?” He taught at the school for 33 years before he retired. Five years later he published his eighth book, Patty’s Got a Gun: Patricia Hearst in 1970s America.

Graebner considers himself essentially a cultural historian -- very early-on as an undergraduate student at Stanford University he realized he had a knack for it. His job, he says, is to take a phenomenon and set it deeply in some historical, cultural context, and to see how it relates to other things in that period which may not on the face of it seem similar.

His key influence was a cultural historian, Warren Susman, who taught at Rutgers University and was able to see the relationship between different things to build a cultural portrait from all the disparate threads. As a young historian, Graebner was fascinated with James Weinstein’s The Corporate Ideal in the Liberal Stateand also work by Gabriel Kolko, Samuel P. Hays and Robert Wiebe, among others.

He takes elaborate notes when he wants to remember two seemingly unrelated things that click in his mind; “thought cards” he calls them, which he references during projects. “I don’t know where the ability comes from to relate X to Y, music to politics, or where even the desire comes from, but I’ve got it, so I do tend to see these things.”

He credits his “terrific” scholarly life to Fredonia, where he had a great deal of freedom to move from one subject to the next based on his interests: coal mining safety, the history of retirement, culture in the 1940s, and social engineering in youth culture, which became a book, Coming Of Age In Buffalo: Youth and Authority in the Postwar Era. Projects he had an interest in, but didn’t finish included histories of the 1950s, the Federal Trade Commission, and a cultural history of genetics.

“What you don’t do is sometimes as important as what you do do.”

Graebner met his wife in Florence, Italy, in 1962 as Stanford students, and they took six months off their jobs in 1989 to live in Bologna with their two sons. They’d been charmed by Rome in 1993, when he held a teaching Fulbright at the university, known as La Sapienza.

He and his wife went around the city with groups looking at rural churches, late-night jazz clubs, suburban housing projects, model towns of the Mussolini era, World War II battlefields, and the field near the Tyrrhenian Sea where the poet Pier Paolo Pasolini was murdered.

They’ve been going back every year for two months to Rome, staying in different places and curating a blog they share together,romethesecondtime.com, that numbers over 750 posts. A friend of Graebner was asked, “What do you do in Rome?” and he replied, “You walk out your front door.” In 2008, they lived in an apartment below where the last bicycle was stolen in Bicycle Thieves, a 1948 Italian neo-realist film by Vittorio De Sica.

While hiking through old World War II battlefields at Monte Cassino, they observed reminders of when the Germans occupied Italy and the landscape was demolished by American bombs. Graebner’s wife stumbled upon an old hand grenade -- about a foot long with a handle on it -- in a field that had recently been plowed. “We decided to leave that alone! Very occasionally now, people do get injured from old, unexploded ordnance that happens to be at a construction site or in the mountains,” he said.

They review films together for an online magazine published in Rome. “Most film reviewers, I’m sure, do it alone, but we don’t. We do it as a team.” They’ve published two alternative travel guide books,Rome the Second Time: 15 Itineraries that Don't Go to the Coliseumand Modern Rome: 4 Great Walks for the Curious Traveler.

What drives him to keep moving forward, Graebner says, is the sense he doesn’t want “to be treated as an old person who doesn’t do anything.” People are afraid to ask people, even those in their 70s, what they’re doing because they’re afraid that they’re not really doing anything. They fear the question will fall flat or that they’ll end up feeling awkward, he says.

He wants to be someone who’s continually interested in doing things people want to talk about, so he can strike up engaging conversations about work he’s doing.

“I’ve also always loved writing! Never had writer’s block, always enjoyed sitting down and writing, doing research. I haven’t lost that sense, I’d say the only thing I’ve lost is some sense, over time, of challenge.”

He went through a period where writing articles on just about anything became routine and he desired a change. At the moment, he isn’t doing history. Instead, photography is in some ways even more of a challenge for Graebner than history, he says. He does what’s called found art and his website is FoundArtPhotos.com.

Graebner continues to find new hobbies and the cultural historian within him endures. On breaks from the discipline he’s so proficient at, he takes snapshots of unintentional collages on city walls that reflect their complicated pasts, sometimes in much more layered and thought-provoking ways than a book can.

“Some of my work resembles abstract expressionism from the late 1940s and early 1950s, like Rothko, Jackson Pollock. I photograph Rome walls and electrical boxes and utility poles that are beautiful in their way. It’s a little hard to describe what I do but I describe things that are layered. We’ve got layers and layers of writing on a wall until a certain beauty emerges from them, laid down by people with spray cans or paint-brushes. Something finally comes out and I see it and photograph it.”

“I print my own stuff, I have a color printer and I’ve tried to market my work to galleries in Buffalo and Los Angeles, so I’m going to keep at it!”