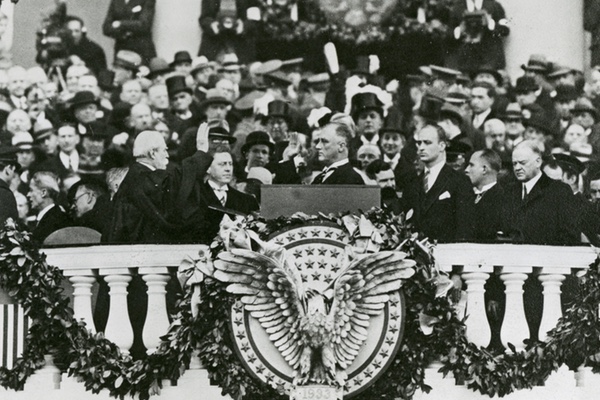 “A steadily degenerating confidence in the future which had reached the height of general alarm. . . . We are in a pitiful position.” The American Dream “appears to lie shattered.” Words from the present Trumpian times when political rancor and divisiveness are rampant and our president continues to attack his predecessor’s legacy and despoil our environment? Nope. The quotes are from Herbert Hoover and a popular historian before FDR took office in March 1933—as found in Robert Dallek’s biography of Franklin Roosevelt.

In addition, Dallek tells us there “was the deep cultural divide between urban and rural Americans, or modernists and fundamentalists, as they were described.” Moreover, “rural folks who aggressively supported ideas and traditions largely in harmony with their established way of life” felt threatened by the growing dominance of the big cities. Many of these same folks especially distrusted all the southern and eastern European immigrants who had come to the cities before the 1924 National Origins Act discriminated against them and Asians. “The belief that these groups could never be turned into citizens who fully accepted Anglo-Saxon economic and political traditions” was widespread.

Beginning with 1920, the USA had elected three successive Republican presidents. In the 1928 presidential election, the Democratic candidate, the Catholic Governor of New York Al Smith, was crushed by the Republican Herbert Hoover. Dallek believes that the election signaled “the extent to which the country remained split between cities and towns, Catholics and Protestants, southern and Eastern Europeans and assimilated voters.” And he quotes a Southern newspaper editor who wrote that the election indicated that the nation’s “Anglo-Saxon stock” would not be “overturned and humiliated,” that the “small communities and rural regions” had “risen up in wrath” against the country’s “great cities.”

Remind you of many Trump voters in 2016? And the divisiveness has continued to the present.

In July 2017, Senator John McCain told his Senate colleagues that their deliberations had become “more partisan, more tribal more of the time than any other time I remember.” Conservative columnist David Brooks started off 2018 with a column entitled “The Retreat to Tribalism.”During the last year The Atlantic featured two essays, “The Tragedy of President Trump's Tribalism”and “Can America Survive Tribalism?”

The first Atlanticessayaccuses President Trump of operating “in a uniquely tribal fashion that has ominously, and even deliberately, widened” our political divisions. Instead the essay advocates “policies that resist tribal separatism and balance the interests of all Americans.”

The second Atlanticessay reviews Amy Chua’s Political Tribes: Group Instinct and the Fate of Nations(2018). Chua’s book explains how the changing demography of the USA has aroused fears among many white Americans that they are losing the dominance they once had—indeed, by 2045 demographers predictthey will be less than 50 percent of the U.S. population.

But now, as in 1932, Americans are unhappy with a Republican president’s performance. By late 1932, Dallek tells us that Hoover “became the butt of vaudeville comedians,” and that he “deepened the gulf between him and his critics by accusing them of ‘unpatriotic’ ” behavior. The same could be said for Trump if we substitute “late-night” for vaudeville. By late 1932, one of every four workers was unemployed. In the November election Roosevelt swept the Electoral College vote, 472 to 59.

In late 2018 unemployment is low, but there are many other reasons for voters’ dissatisfaction with Trump. According to an early September 2018 ABC News/Washington Post Poll,63 percent of those polled thought that both Trump and the Republican Party were out of touch with the concerns of most people. Trump’s approval rating stood at 36 percent. This was the 10 points or more lower than presidents Obama, Clinton, and Reagan at a comparable time heading into their first midterm election.

As in 1932, so today, the American Dream seems shattered to many. In Chau’s book mentioned above, she insists that what we need is a new American vision that can unite our torn nation. She criticizes both the Right and Left for stoking the flames of tribalism. At the beginning of this year, I agreedwith two conservative columnist David Brooks and Ross Douthat—both very critical of Trump—who also stated that we need such a new vision. But, unlike them, I suggested that two prominent Americans assassinated a half century ago, Martin Luther King, Jr.(MLK) and Robert Kennedy (RFK), offered us models for reconstructing our dream—in King’s words so that “we will be able to transform the jangling discords of our nation into a beautiful symphony of brotherhood.”

Although acknowledging King’s importance, Chua ends her book by quoting from another source that can provide inspiration for any imaginative reconstruction of our dream, Langston Hughes’s 1935 poem “Let America Be America Again.” He wanted America “to be the dream the dreamers dreamed,” to be a “great strong land of love.” But it had to be more inclusive than in the past. It had to go beyond “dog eat dog,” it had to extend justice to poor whites, blacks, Native Americans, and immigrants. Hughes’s final stanza reads,

Out of the rack and ruin of our gangster death,

The rape and rot of graft, and stealth, and lies,

We, the people, must redeem

The land, the mines, the plants, the rivers.

The mountains and the endless plain—

All, all the stretch of these great green states—

How appropriate that last stanza seems today! The first two lines speaking to the rot and lies of the present administration and the remaining ones to the need to undo all the environmental harm the Trump government has inflicted upon us. “And make America again” reminds us of the Trump mantra “Make America Great Again.”

But Hughes did not urge us to restore an age of white dominance (as Trump does), but beckoned us forward, as MLK and RFK did, toward creating a more inclusive American vision. One that could inspire us all, whether we be white, black, or brown; male or female; young or old; rich or poor.

Our finest Americans have long pointed us in this direction. In his First Inaugural Address, occurring about a month before the outbreak of the Civil War, Lincoln told his “dissatisfied fellow-countrymen”: “We are not enemies, but friends. We must not be enemies. Though passion may have strained it must not break our bonds of affection.” Instead he appealed to “the better angels of our nature.”

In his Second Inaugural Address, occurring about a month before the end of the Civil War,Lincoln said, “but let us judge not, that we be not judged. . . . With malice toward none, with charity for all . . . let us strive on to finish the work we are in, to bind up the nation's wounds, to care for him who shall have borne the battle and for his widow and his orphan, to do all which may achieve and cherish a just and lasting peace among ourselves and with all nations.”

A century after Lincoln, MLK expressed a similar spirit in his “I Have a Dream Speech”in which he held out a vision of a “day when all of God's children, black men and white men, Jews and Gentiles, Protestants and Catholics, will be able to join hands and sing in the words of the old Negro spiritual: ‘Free at last! Free at last! Thank God Almighty, we are free at last!’”

In 1968, before he was assassinated, Robert Kennedy demonstrated (as aNewsweek article noted  after his victory in an Indiana primary) that “in a painful era of racial polarization” one could still “bridge the chasm separating the gut elements of the traditional Democratic coalition. He swept the Negro vote while at the same time piling up big leads among backlashy white workingmen—the same group that whistled Dixie for Alabama's George Wallace in the primary four years ago.”

In recent decades there have been glimmers of hope that we can move more toward national unity and embrace a reimagined American Dream. In his2004 Keynote Address to the Democratic Convention,Barack Obama spoke against “those who are preparing to divide us” and urged us to remember that “we are all connected as one people.” Once he became president, he occasionally reminded us of the need for more civil political discourse. In 2010, for example, in a University of Michigan commencement address he toldthe graduates, “We can’t expect to solve our problems if all we do is tear each other down. You can disagree with a certain policy without demonizing the person who espouses it. You can question somebody’s views and their judgment without questioning their motives or their patriotism.”

Although the Trump candidacy and presidency has heighted political incivility, occasional hopeful rays continue to appear. The final words of Sen. John McCain and the funeral he planned for himself combined for one such powerful ray. In his last advice to the American people hestated, “We are 325 million opinionated, vociferous individuals. We argue and compete and sometimes even vilify each other in our raucous public debates. But, we have always had so much more in common with each other than in disagreement. If only we remember that and give each other the benefit of the presumption that we all love our country, we’ll get through these challenging times. We will come through them stronger than before.” To deliver eulogies at his funeral, he asked one former Republican president (George W. Bush) and one former Democrat (Barack Obama). In theNew Yorker, Susan Glasser wrote,“John McCain’s Funeral Was the Biggest Resistance Meeting [to Trumpism] Yet.”

Such words as those of Obama or McCain may seem fine, but 2018 is not, as 1932 was, a presidential election year. Unlike Hoover in late 1932, it is unlikely that Trump will soon vacate the presidency. But what does seem similar is our increasing disgust with our president and our yearning for new leadership that can help restore our fractured political body.

In a 1932 interview, FDR stated that what our country needed was “some one whose interests are not special but general, some one who can understand and treat the country as a whole. For . . . no interest, no class, no section, is either separate or supreme above the interests of all.” As Dallek writes, “If Roosevelt was to find the means to overcome the nation’s crisis, it would have to rest on shared support from every region and every ethnic, religious, and racial group.”

In his First Inaugural Address, he criticized “false leadership,” “self-seekers” who had “no vision.” But what vision did he have, and how did it differ from previous ones? He thought of himself as a liberal and progressive, but in a non-ideological, pragmatic, and imaginative sense, one open to compromise and experiment. In pursuit of the common good, which should be what a government pursues, he was prepared to defy the failed Republican bias against substantial government aid. Dallek tells us that in1932 President Hoover thought that “Federal aid would be a disservice to the unemployed”; and “Roosevelt's New Deal reforms were giant steps in humanizing the American industrial system.”

It’s true that FDR did not please everyone. Many wealthy businessmen, conservative politicians, and the Hearst press, for example, thought him too leftist. But overall he had a unifying vision – as indicated by his popularity with the American people. They elected him president four times, and generally approved of his policies; in the spring of 1941, for example, he had a 76 percent approval rating.

2018 is not 1932. But again most Americans are disgusted with a president’s behavior and ready to consider a revised and recharged American vision. Will it be forthcoming? Will it be inclusive enough? Who will provide it?