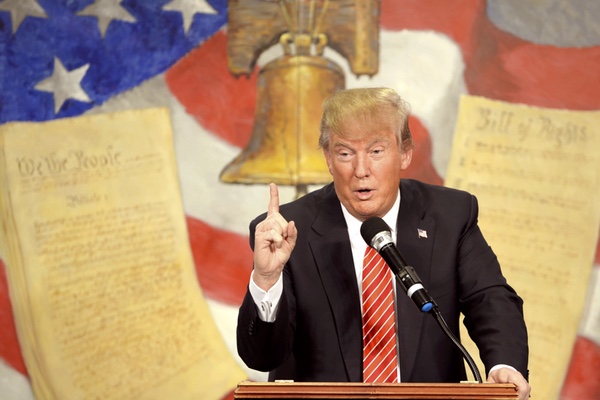 In 1838, when he was a twenty-nine-year-old Illinois state legislator, Abraham Lincoln foresaw the coming of Donald Trump.

Lincoln warned of him, or someone like him, in a speech championing the rule of law over racist-driven mob rule. He was addressing the Young Men’s Lyceum of Springfield, Illinois, on the evening of January 27, 1838. He spoke on “The Perpetuation of Our Political Institutions.” 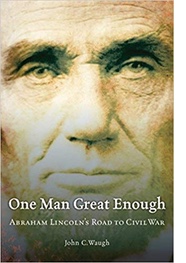 The original Lyceum was a gymnasium near Athens in ancient Greece where Aristotle thought and taught. In Lincoln’s time the Springfield Lyceum was organized as a speaking venue for prominent young, up-climbing men. For several years in the mid-1830s it was a leading player in the cultural life of Springfield.

In Lincoln’s Lyceum speech he spoke of the hills and valleys of “this goodly land,” on which the Founding Fathers up-reared “a political edifice of liberty and equal rights”—and transmitted it to us.

Lincoln spoke of our duty to the Fathers to in turn transmit this edifice “unprofaned by the foot of an invader… undecayed by the lapse of time, and untorn by usurpation—to the latest generation that fate shall permit the world to know.” He spoke of this as a “task of gratitude to our fathers, justice to ourselves, duty to posterity, and love for our species in general” that “imperatively requires us faithfully to perform.”

And he spoke of the danger to this edifice. “At what point,” he asked, “shall we expect the approach of danger?” He predicted, “If it ever reach us, it must spring up amongst us.” He did not believe it could come from abroad. He believed that “If destruction be our lot, we must ourselves be its author and finisher.”

Is it unreasonable, Lincoln asked in that speech 180 years ago, “to expect, that some man possessed of the loftiest genius, coupled with ambition sufficient to push it to its utmost stretch, will at some time, spring up amongst us?”

And when such a one does rise up amongst us, Lincoln warned, “it will require the people to be united with each other, attached to the government and laws, and generally intelligent, to successfully frustrate his designs.” Lincoln predicted if such a figure should arise among us, “Distinction will be his paramount object” and, “nothing left to be done in the way of building up, he would set boldly to the task of pulling down.”

“There is, even now,” Lincoln said of his time, in which white supremacy mobs were torturing and hanging blacks, “something of ill-omen amongst us.” He spoke of “the increasing disregard for law which pervades the country; the growing disposition to substitute the wild and furious passions, in lieu of the sober judgment of the Courts; and the worse than savage mobs, for the executive ministers of justice.”

Lincoln believed that “Reason, cold, calculating, unimpassioned reason, must furnish all the materials for our future support and defence. Let those [materials] be moulded intogeneral intelligence, [sound] moralityand, in particular, a reverence for the constitution and laws….” Upon these, Lincoln said, “let the proud fabric of freedom rest as the rock of its basis; and as truly has been said of the only greater institution, ‘the gates of hell shall not prevail against it.’ ” (Italics are Lincoln’s.)

Something of ill omen is among us today as it was in Lincoln’s time. It would be a stretch to call Trump a “loftiest genius.” But he clearly appears an agent for “pulling down,” both in his relationship with the majority of Americans and his relationship with other nations that have been our traditional friends and allies. He has called the European Union “enemies of America,” and instead of befriending them he has spurned them and has cozied up to dictators. He seems more comfortable with the Putins and Kim Jong-uns of this troubled world rather than our proven friends.

He has spurned other nations in the worldwide war against climate change. He has disregarded laws and traditional practices and lied to us at a Gatling gun clip. He has honed his knife to cut back key domestic programs vital to many Americans, particularly the old, the poor, and the minorities. He has plundered the environment for the sake of commercial development. He has not hesitated in his early morning tweets to pull down with damning words anybody who opposes or criticizes him. He has called the media, which has long been a bulwark of our freedoms, “an enemy of America.”

This all looks nothing like “Make America Great Again.” It looks disturbingly more like the Pulling Down of America by one who has sprung up among us—something that Lincoln warned of nearly two centuries ago.