What Machiavelli Can Teach Us about Donald Trump

Suzy Evans J.D., Ph.D. is a lawyer, historian, and literary agent who holds a Ph.D. in history from UC Berkeley. Her books include Machiavelli for Moms (Simon & Schuster) and Forgotten Crimes: the Holocaust and People with Disabilities. She is also a ghostwriter for a #1 New York Times bestselling author with 25 million copies in print and her work has appeared in the New York Times, the Los Angeles Times, The Wall Street Journal, and other publications, including USA Today, Newsweek, Parade, Forbes and The London Times. She can be found on Instagram at @suzyevans.jd.phd and at suzy@dijkstraagency.com

Throughout the The Prince and his other political works, Machiavelli cautions that internal subversion is the most dangerous consequence of a prince losing the trust of his subjects. To guard against this, a prince must never appear frivolous, unprincipled, fickle, or shallow. Instead, he must always appear to adhere to “certain values of virtu.” If he can do this, a prince will avoid the greatest danger of all: revolt from within. “Internal subversion is more perilous than external attacks,” Machiavelli cautions, “and if a prince doesn’t take care to avoid the hatred of the people, he will live in a state of constant fear.” 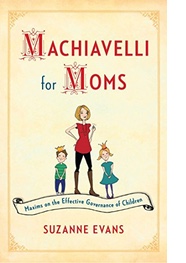 Machiavelli clarifies this by saying that a leader must crush internal subversion before it gains sufficient momentum to threaten his rule. Toward that end, some princes disarmed the citizenry, some divided towns, some tried to win over disloyal subjects, and some built fortresses to prevent rebellions or destroyed them to maintain control of a newly acquired principality or state. But Machiavelli goes out of his way to say that the success of any particular strategy depends on the circumstances and that “few final judgments” can be made. What he is willing to firmly say, however, is that a leader becomes great by overcoming obstacles and defeating opposition in whatever form it takes.

“Without doubt princes become great when they overcome the difficulties and obstacles by which they are confronted,” he explains, “and therefore fortune, especially when she desires to make a new prince great” causes enemies to arise and “form designs against him, in order that he may have the opportunity of defeating them, and by them to rise higher, as by a ladder which his enemies have raised.”

But that’s not always easy to do, Machiavelli cautions, because directly related to domestic insurrections are conspiracies — and he should know because not only was he unjustly imprisoned and tortured for his alleged role in a conspiracy to assassinate Cardinal Giovanni de’Medici and seize the government by force, but one of the bloodiest upheavals in Renaissance Florence — the Pazzi Conspiracy — occurred when Machiavelli was nine years old.

This, briefly, is what happened: on Easter Sunday in 1478, during High Mass in the Cathedral of Florence, assassins, armed with daggers, attacked Lorenzo de’ Medici and his brother Giuliano in an attempt to seize the government and overthrow it by force. Stabbed through the chest, Giuliano took a few steps, then collapsed and bled to death on the cathedral floor, while two armed priests came up behind Lorenzo, who defended himself with his own weapon and fled to the sacristy.

As word of the assassination spread, enraged Florentines seized and killed the conspirators. Plotters were hanged, beheaded, or thrown out of palace windows alive and hacked to pieces in the streets while the each of the bodies of the three main conspirators – a leading member of the rival Pazzi family and the Archbishop of Pisa, among them – were left dangling for days above the Piazza della Signoria.

“[A]ll the city was up in arms,” an observer wrote, “all over the city the name of the Medici was shouted, and the limbs of the dead were seen either stuck on the points of weapons or dragged through the city, and everybody with words full of anger and deeds full of cruelty hunted down the Pazzi.”

Was the young Niccolò an eyewitness to these dreadful acts? Or, as historian Sebastian De Grazia asks, “was he quickly shunted behind closed, bolted doors?” No one knows. But he lived with his family only a few miles from the carnage, and “the sight of bodies being torn apart by angry crowds” or stories he heard later of these “grave and tumultuous events” must have left a mark on the mind of the young Machiavelli whose pessimistic view of human nature was forged, according to one biographer, “when his peaceful childhood was violently shattered.”

Bottom line: Machiavelli probably saw with his own eyes that, to survive, a prince must crush internal subversion before it gains sufficient momentum to threaten his rule.

Nowhere is this more clearly reflected today than in the crushing of internal subversion and civic dissent surrounding allegations of sexual assault against then-embattled Supreme Court nominee Brett Kavanaugh, not to mention Trump’s own offensive sexist remarks ostensibly intended to intimidate, humiliate, silence, and demean those ordinary American women (and men) who dared to stand up and seek redress against him and the encroaching tyrannical totalitarianism of his rule.

The fact that Kavanaugh was quickly confirmed after an undemocratic sham of an “investigation” and that Trump remains in office —  despite clear and convincing evidence that he is morally and perhaps mentally unfit to do so — reveals much about the larger social, cultural and political values of twenty-first-century America, where deep-seated racism, sexism, xenophobia, rampant political and financial corruption, and perhaps even conspiratorial acts of treason at the top levels of our government are the order of the day. Or at least that’s what Machiavelli would say.