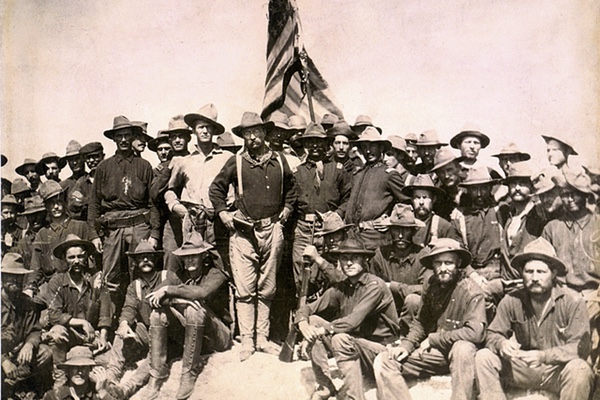 “Colonel Roosevelt and his Rough Riders at the top of the hill which they captured, Battle of San Juan”

How the Rough Riders made Theodore Roosevelt a “celebrity hero.”

As the author of a then-in-progress book about Theodore Roosevelt and his 1898 “Rough Riders,” my head spun on election night, November 2016, at the disturbing triumph of Donald Trump. It used to be that American presidents, including the old-style “celebrity” types, had to prove their fitness for the job. Proof normally required significant political experience or noteworthy military contributions—or both. One thinks of George Washington, famous via the Revolution and the first American “celebrity hero,” or Dwight Eisenhower in the years after World War II, or John Kennedy, who not only fit the mold but seemed a natural in the celebrity role. Evidence of high character and a clear moral compass often has accompanied other qualifications—Abraham Lincoln’s uncompromising opposition to slavery expansion or Ronald Reagan’s unbending contempt for Soviet despotism. It seemed unthinkable that one might gain the nation’s highest office by reputation as a flashy business dealer, hotel-casino operator, and “reality TV” personality. Public standards have changed with the times. Now well familiar with Trump’s venomous, legally-clouded handling of the presidency, Americans more than ever should ask how they really want their country to be led, and by what sorts of people. 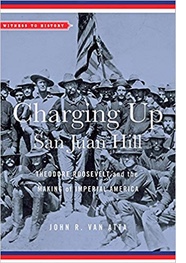 Historians, for their part, have become increasingly interested in “celebrity studies” as a different way of understanding how key figures of the past have both reflected and influenced their cultures. A perfect example, whose origins, purposes, and character contrast mightily with Trump’s, is Theodore Roosevelt, the twenty-sixth president of the United States from 1901 to 1909. He did not, however, gain celebrity on his own. Without the help of his famous volunteer cavalry regiment in the Spanish-American War—the “Rough Riders”—TR probably would have gone down as only a minor person in American history, unknown to most people living today.

As a story of American military history, that of Roosevelt, the Rough Riders, and their July 1, 1898 victory in the “Battle of San Juan Hill” reflected broader dictates of culture and society as well as the more common considerations of weapons, strategy, leadership, and national interest. Those broader dictates mirrored the process of celebrity-making for that time, just as Trump’s rise has for today. From a cultural standpoint, Roosevelt’s successful military experience in Cuba confirmed him as a popular force in American life before he became nearly so much a political one. As for the motley band of soldiers who provided TR’s postwar celebrity, previous full-length studies of the Rough Riders have focused much more on what they didthan on what they meant, both to themselves and to other Americans.

The Spanish-American War of 1898 changed the way that many Americans saw themselves and the place of their nation. People could identify with Roosevelt’s Rough Riders because they represented practically all walks of American life. Contrary to common belief today, they were not just a bunch of roughneck westerners with a few Ivy League recruits mixed in for good measure. Their sacrifices, said the Dallas Morning News, “tell . . . of American bravery without regard to birth, wealth, or station, and how the country’s peril is the real leveler of all her citizens.” Beyond that, the war’s outcome would reaffirm a sense of pride in American expansion not felt since the 1840s era of “Manifest Destiny.” As a minister speaking in Chicago said, “History has no precedent, no comparison. The theatre in which the great drama of war was enacted was vast, far transcending our original expectations and designs.”

Meanwhile, Roosevelt’s popular reputation rose to near-epic levels. His image in military uniform made the cover of Harper’s Weekly, while drawings and photographs of his regiment in action around Santiago, Cuba, filled its pages. News of the Rough Riders circulated all through the country. Editorial columns everywhere showered praise on their now-famous colonel. The Rough Riders looked like “a stroke of genius,” commented the Springfield Republican, “for they hit the popular fancy and created an enormous interest in the man who created them.”

Before he became a war hero and national celebrity, TR had no clear future in elective politics. Old Guard Republicans, who deplored young Roosevelt’s reformist impulses, controlled politics in his native New York, and President William McKinley hardly imagined him on a national ticket. But after the war, declared the New Haven Registerin late August 1898, “[t]he American people are very sensitive to such influences as Roosevelt personifies, and if they make up their mind that the qualities of the fighter . . . ought to receive civic recognition, [then] nothing short of a cyclone can stop their planning and plotting for it.”

Wartime service had advanced every chief executive but one since Ulysses S. Grant in 1868, and the politically savvy Republican Senator Henry Cabot Lodge, Roosevelt’s closest friend, quickly detected a future president. TR had hinted at political motives as among the reasons for his volunteering in the first place. Now, his reputation for battlefield heroics placed him well ahead of all possible contenders in either party except the president himself. Even before the shooting had stopped, Lodge started pulling strings to get Roosevelt nominated for governor of New York, a stepping-stone to higher office—and then, after McKinley, the presidency no later than 1904.

If it somehow tainted TR’s “hero image” that he would use it for political advancement, he lived in a society that expectedhim to do so. Americans no longer defined their heroes quite as they had in early-republic times. “It is a genuinely popular movement which is sweeping him forward,” observed the Boston Journal when the Rough Riders returned home, “and to all appearances it is as irresistible as it is spontaneous.” More and more new figures of this kind emerged after the Civil War, a result of democratized popular tastes and the rapidly growing mass media.

The emotional intensity of war, too, had worked a certain cultural magic. Even before they returned home, TR and the Rough Riders stood in the vortex of this phenomenon. Comparable to modern rock stars, their popularity had skyrocketed to the point that women admirers reportedly descended on Camp Wyckoff, Long Island, just to lay eyes on Roosevelt and his recently returned troopers. They implored the men for autographs or pictures and followed them to the laundries, poking through their soiled clothing in search of souvenirs from Santiago. Some reportedly whipped out scissors and knives to clip off buttons and cut out squares of insignia. A few even carried off dirty collars as prizes.

In fact, TR and his volunteers had galvanized stateside morale as soon as the reports of “San Juan Hill” first hit the newsstands after that July 1. The timing, of course, could not have been better, as Independence Day celebrations everywhere asserted that American troops had measured up to the job in Cuba. But the soldiers had proven far more than that. The future of American diplomacy, the compatibility of North and South, the strength and character of manhood, and the preservation of key values of the republic—all of it now tied to Roosevelt’s new public image as a celebrity hero and president-in-the-making.