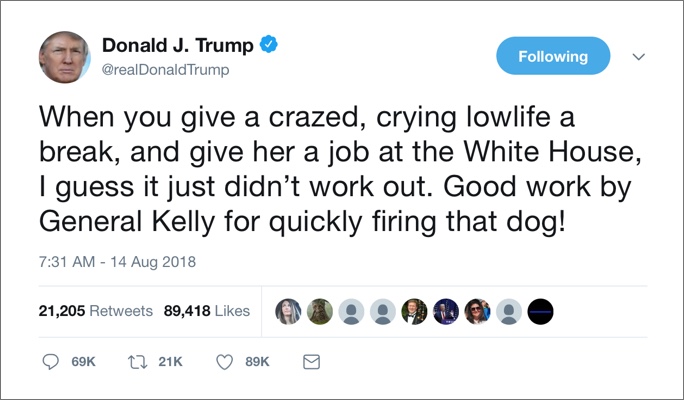 Democracy requires deliberation, an appreciation of complex ideas, and a willingness to learn from others. In other words, it requires communication. Communication requires one to develop ideas worth sharing. And that’s the easy part. Turning ideas into words is hard work. 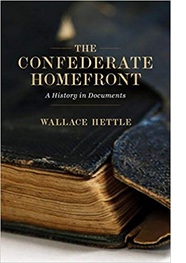 In contrast, Twitter favors thoughtless bite-sized messages and instantaneous retweets, which in turn promote bullying, tribalism, and misogyny. In other words, it’s the perfect medium for Donald Trump.

Yes, Twitter can mobilize political opinion for good causes. It can entertain, amuse and even enlighten. Yet even at its best, online media is bedeviled by trolls, those who seek primarily to irritate and get a rise out of others. On Twitter today, the troll-in-chief happens to be our president.

Trump does deserve credit for one thing. While the Obama campaign in 2008 effectively used new media as an organizing tool, Trump is the first president to craft a compelling online persona appealing to his core followers. Twitter allows him to present his ideas directly to his base, unfiltered by pesky questions from the press. In less than 280 characters he can change the national conversation, as he has done with his sniping at LeBron James, the European Union, and even fellow Republicans such as Jeff Sessions. His seeming spontaneity lends itself to gaffes, but those very mistakes lend him an aura of authenticity.

Trump’s incendiary rhetoric has advanced him from celebrity to president. Further, it has helped him to remake the Republican Party in his image. His lack of discipline online, even in regard to grave matters raised by the Russia investigation, may eventually prove his undoing. For now, Twitter is one of the secrets to his success.

Trump is not the first president to benefit from a new mass medium. Arguably the first was Abraham Lincoln. Newspapers preceded Lincoln, but his career coincided with the growth of the inexpensive “penny press,” which made newspapers available to ordinary citizens.

Lincoln entered politics as a highly partisan Whig, who embraced Henry Clay’s agenda of expanding a market economy. Newspapers were not only affiliated with parties, they deliberately stoked controversies to sell papers. Newspapers included short highly divisive articles, often written under pseudonyms. Fictitious names allowed authors to engage in free-wheeling attacks that resemble those on blogs and social media platforms.

In 1842, Lincoln contributed to a series of satirical pieces, under the name “Rebecca,” mocking a political rival, James Shields, in Springfield, Illinois. Lincoln had not authored all of the columns; Mary Todd, his future wife, penned the harshest ones. Ultimately, his identity was unmasked. Lincoln took the blame for all of the columns, and Shields nearly forced Lincoln onto a dueling field. It is a long story, but Lincoln escaped the fight with his dignity intact. As a lawyer who was later famous for his self-control, he always regretted what he had done.

As he reached political maturity, Lincoln continued to advance his agenda through the press. In 1858, his debates with Stephen Douglas turned him into a national figure. He was not a charismatic orator, but he earned a large following because the transcripts appeared in Eastern newspapers. In print, his keen logic on the sectional crisis drew plaudits. Lincoln engaged in racist discourse that has rightly damaged his historical reputation, but at the time those words struck many politicians as prudent.

Lincoln gave his 1863 Gettysburg Address to memorialize a graveyard at the Pennsylvania battlefield. The event opened with a two-hour oration by the most renowned speaker of the time, Edward Everett. When Lincoln followed, his 272-word speech was so brief that the crowd failed to grasp its significance. It became influential only after wide circulation in the press. Lincoln’s best speech, the Second Inaugural Address, reads like a prose poem, offering a complex meditation on slavery and emancipation. It can only be appreciated in print, and it provides a huge contrast with his youthful, combative newspaper columns.

Like Lincoln, Franklin Roosevelt also exploited a new means of communication: radio. Calvin Coolidge and Herbert Hoover appeared on the radio before Roosevelt, but he was the first president to use broadcasting effectively. As Roosevelt entered office at the height of the Great Depression, banks teetered on the verge of collapse. As we learned in 2008, banking is a confidence game; its survival depends on trust in a potentially unstable system.

Therefore, in March 1933, shortly after taking office (presidents then were inaugurated in March), Roosevelt took to the airwaves to shore up desperately needed faith in the banks. His “fireside chats” brought his voice into homes across the country, creating a sense of intimacy between him and his audience. Whether Roosevelt’s bond with the people was real or fictitious, it proved crucial to his success. His reassuring voice helped him not only bolster the economic system but to advance his unsystematic but ambitious policy agenda. Through radio, the Hudson River aristocrat could feel like a trusted man of the people.

John F. Kennedy is often cited as the first television president. Certainly Kennedy’s youthful good looks helped him in his debates with Richard Nixon. However, Ronald Reagan was the first president to truly master television. Reagan was an actor who excelled even more as a television host. Reagan honed his small-screen skills as host of TV’s General Electric Theater. He projected a confident, avuncular personality.

More importantly, in the 1980 campaign Reagan’s team perfected the practice of “message-discipline.” By focusing on one idea per day, Reagan forced the media to follow his narrative. Reagan did sometimes wander off script, famously declaring that trees were a leading cause of air pollution. But such incidents are memorable only because they were relatively rare. Reagan used television in a surprisingly authoritative way to sell his brand of politics like it was a new car. For him, the presidency really was the role of a lifetime, as one biographer put it.

Two decades ago, Internet optimists believed that social media offered us unfettered communication and human connection. Instead, we have Trump, whose own wife has publicly bemoaned the problem of cyber bullying. Social media did not elect Donald Trump—the inequity of the Electoral College did that. But just as historians associate Roosevelt with radio, we will long remember Trump for his garbled tweets.

Paul Ryan is stepping down as Speaker of the House. Maybe, as he says, he wants to spend more time with his family. However, the move looks more like a tacit acknowledgment that the Republican Party belongs to Trump.

Recently, Ryan offered his own explanation for Trump’s online antics. He recently told a New York Times reporter that Trump was “just trolling you [liberal] guys.” Yet Trump, with his supreme capacity for disruption, has effectively trolled Republicans too.

If Donald Trump were just a troll, we could ignore him. However, trolls can’t place children at the border in cages, threaten nuclear war, or choose Supreme Court justices who threaten reproductive rights. Trump, the troll, is also president. At the very least we should unfollow him. Better still, he needs to be blocked.