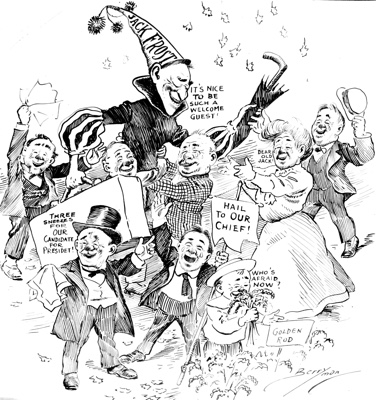 Hay fever season is commencing soon, sometime around August 15, and will probably last until sneezeless October 1.Choruses of ker-choos will begin to fill the air as sneezers scurry to amass allergy pills and 4-ply tissues. Although doctors and pharmacists welcome the economic boost, it is no holiday for the sufferers. But it used to be.

Century-old newspapers touted hay fever as being fashionable, deserving of its own special holiday, St. Sneezer’s Day. It was a movable date, scheduled on the commencement of hay fever season. In 1916, it fell on August 15 with a full moon crossing the sky. The moon phase was unimportant except that it provided the Indianapolis News an opportunity to report: “Asses bray and dogs bark at the moon, but people sneeze at it. In short, the hay fever season is on.”

In the early 1900s, hay fever was said to be “one of the highest-toned diseases known to Society with a capital S.” No doctor had ever seen a true case of hay fever among the working classes. None but the affluent could afford it.

These high-class sufferers, mocked as Hayfeverites, seemed to “sneeze in concert” and “blow their noses and wipe their eyes in unison.” They even had their own brigade: The United States Hay Fever Association, which formed as a joke and forgot to disassemble. So far as is known, this was the only society in the country bound together by the ties of disease. “There is no diphtheria club or pneumonia circle or independent order of rheumatics.”

For many years, hay fever remained the top ailment of aristocrats. For a short time, it looked as if appendicitis might bump hay fever from the pedestal; then nervous prostration threatened to displace the favorite. But hay fever had one powerful advantage over both of those maladies; its prey were ordered to take a prescription, a most pleasing antidote – a change of scene, and always to the highest, high class resort on the railroad map.

Of course, the prescription was offered almost exclusively to people who could produce the price of a railroad ticket to some immune zone. Initially the remedy was found only in the White Mountains of New Hampshire, generally in Bethlehem. Then gradually, and quite inexplicably, other spots began to acquire remedial properties.

A discovery was made high in the Adirondack Mountains; a town called Lake Placid was found to be immune – or nearly so. To make it wholly “sneeze-proof and ca-choo tight,” three things were necessary. The streets, roads and walks needed to be oiled regularly. All golden rod, devil’s paintbrush, ragweed, and all other pollen-bearing plants had to be removed from the town. And finally, before the high-roller Hayfeverites arrived, the cash registers needed to be well-greased.

On August 27, 1915, the first annual meeting of the Empire State branch of the United States Hay Fever Association was held in Lake Placid, with Melvil Dewey presiding. This inventor of the Dewey Decimal System and father of library science came to the Adirondacks in 1895 seeking relief from hay fever and found it. He soon built the world-famous Lake Placid Club, where he promoted winter sports and implemented the use of simplified spelling (loj for lodge, cofi for coffee, etc.). Now he was hoping to certify the club as a “pollenless paradise” for hay fever sufferers.

At the 1915 sneezer convention, P. F. Jerome, secretary of the national association, explained: “Hay fever is due to a hyper-ca-choosensibility of the mu-ca-choo-cous membrane, sensitive to an acrid prin-ca-choo-ciple contained in the pollen of certain plants.”

After his talk, “a chorus of simplified sneezers” expelled some tunes. Then a Hayfeverite read her poem, The Lost Sneeze:

Mary had a mighty sneeze.

And everywhere that Mary went

The sneeze was sure to go.

To Lake Placid once she went;

This was of hope, the dawn,

While – presto! – the sneeze is gone!

Besides songs and poetry, the meeting included consideration of the woman suffrage question. Someone stated that more men had hay fever than women, and yet women wanted the vote. End of discussion.

The hay fever fellowship fit with the aura of exclusiveness at the Lake Placid Club. The resort forbade admission to Jews, blacks, tuberculosis patients, and other so-called undesirables but it welcomed the folly, and the deep pockets, of stuffy-nosed sneezers. Perhaps it was appropriate that a reporter called them “neurotics.”

This did not mean the disease was imaginary, but the reporter wondered: “Is there any essential reason why the penniless man has a tougher mucous membrane than the plutocrat?”

Hay fever was a rather modern disease, so perhaps it was mis-classified. In the early 1800s, John Bostock, a London doctor, suffered from puffy, itchy eyes; sneezing; and difficulty in breathing – only during the month of June. He tried treatments such as bleeding, cold baths, induced vomiting, and opium, but nothing worked.

In 1828, he concluded that his suffering was exacerbated by the exhausting heat of summer, so he gave his illness the name “summer catarrh.” Others thought the ailment resulted from the smell of new hay and called it “hay fever.” Although some turned up their noses at the uncouth name, hay fever stuck.

No longer is the ailment exclusive to the mucous membranes of the millionaires. And St. Sneezers Day is no longer a holiday. But hay fever sufferers might want to try an old remedy: sneeze your head off and then run outdoors and catch it when it comes back down.