Has Democratic Socialism a Future in American Politics? 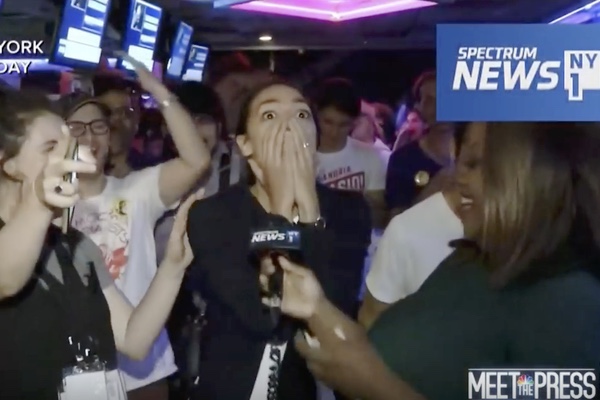 Alexandria Ocasio-Cortez, reacting to her victory

Recently, when 28-year-old Alexandria Ocasio-Cortez, an obscure, upfront democratic socialist from the Bronx, easily defeated one of the most powerful U.S. Congressmen in the Democratic primary, the story became an overnight sensation. How, the pundits wondered, could this upset have occurred?

Actually, it shouldn’t have been a total surprise for, in recent years, democratic socialism has been making a remarkable comeback in American life. Bernie Sanders, the democratic socialist U.S. Senator from Vermont, won 23 Democratic primaries and caucuses during his tumultuous 2016 election campaign. Indeed, he nearly defeated Hillary Clinton, all but coronated by the Democratic Party establishment, for the Democratic presidential nomination. In addition, numerous candidates backed by a Sanders campaign’s successor, Our Revolution, won Democratic Party primaries and election to office in 2017 and 2018.

Other indications of socialism’s recent popularity are numerous. They include Gallup polls done in early 2016―one showing that 35 percent of Americans had a favorable view of “socialism” and another revealing that 6 out of 10 Democratic primary voters felt that “socialism” had a positive impact on society. Polls found that socialism was especially popular among young people, a key factor behind the jump in membership of Democratic Socialists of America from 5,000 in November 2016 to 40,000 today.

Of course, democratic socialism―centered on the idea of democratic ownership and control of the economy―has had periods of growth, as well as decline, over the course of American history. During the first decades of the 20th century, it flourished. By 1912, the Socialist Party of America, led by charismatic labor leader and presidential candidate Eugene V. Debs, had succeeded in electing socialists to 1,200 public offices in 340 American cities, including 79 mayors in 24 states. But, within a few years, the party was largely destroyed by government repression (thanks to its opposition to U.S. entry into World War I) and by its bitter feud with the rising Communist movement over the Communists’ contempt for political democracy and civil liberties.

With the onset of the Great Depression, the Socialist Party experienced a modest revival, but soon began to fade as the Democratic Party, then in its New Deal phase, began to implement many of the key programs long championed by democratic socialists: collective bargaining rights for workers; minimum wage and maximum hour laws; public sector jobs for the unemployed; a social security system; and heavy taxes on the rich to pay for an array of social services. Increasingly, the Democratic Party attracted the support of the democratic socialist constituency, including some of its prominent figures―labor leaders like Walter Reuther, David Dubinsky, Sidney Hillman, and A. Philip Randolph, educators like John Dewey, women’s rights activists like Margaret Sanger, and popular writers like Upton Sinclair.

For some decades, the Democratic Socialist Organizing Committee, founded in 1973 by the writer Michael Harrington and other committed socialists―and its successor, Democratic Socialists of America (DSA)―tried to revive democratic socialism by cutting loose from fruitless third party election campaigns and focusing, instead, on fostering public support for greater economic and social democracy. On occasion, DSA backed worthy candidates in Democratic primaries. But it had only minimal success. For the most part, the best that DSA could do was to keep the democratic socialist current alive by pulling together socialist-minded activists scattered about in the labor, women’s rights, racial justice, and peace movements, and putting them in touch with a small group of sympathetic public officials.

Nevertheless, the rise in American life of a rapacious corporate capitalism, a widening level of economic inequality, and the sharply rightwing policies of many states and the federal government are clearly inspiring a revolt on the Left. As the Sanders campaign and the recent election victories of Ocasio-Cortez and other leftwing candidates indicate, in electoral politics this revolt is finding expression largely inside the Democratic Party.

Although it’s too early to know how this revolt will play out, there are signs that it is beginning to alter Democratic Party politics. With a heartily-despised Donald Trump in the White House and with rightwing Republicans now dominating Congress and the Supreme Court, many newly-energized leftwing voters will probably close ranks with mainstream Democrats in an all-out Democratic Party effort to drive the Right from power. At the same time, there is a comparable recognition among establishment Democrats that, unless they welcome the growing number of democratic socialists into their ranks, they have little chance of winning elections. This might well explain why so many leading Democratic politicians have now turned to backing the staples of the Sanders campaign, such as Medicare for all, free public college education, and curbs on corporate power. It might also explain why the Democratic National Committee is busy cutting back the establishment-controlled superdelegate system for choosing a presidential candidate.