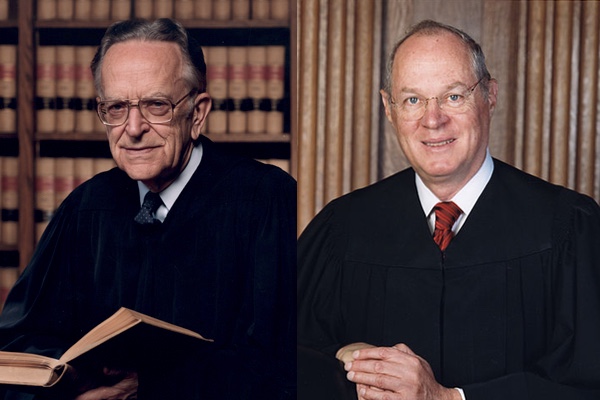 Another accident gave us Harry Blackmun. What does that tell you?

Presidents Richard Nixon and Ronald Reagan both had the opportunity to appoint four Supreme Court Justices, with three appointments each being accomplished without much fanfare. But both Presidents had one situation where not one, but two, Supreme Court selections became controversial, and forced both Nixon and Reagan to go to a “third choice” to accomplish the goal of completing an appointment to the highest court in the land.

Nixon appointed Clement Haynesworth and G. Harold Carswell, and then had to “settle” for Harry Blackmun in 1970, while Reagan appointed Robert Bork and then Douglas H. Ginsburg, but had to “settle” for Anthony Kennedy in 1988. Blackmun would go on to serve on the Supreme Court for 24 years to 1994, and Kennedy served 30 years, announcing his retirement on June 27, 2018. Both Blackmun and Kennedy have had a massive effect on the Supreme Court and constitutional law.

Clement Haynesworth faced a rejection vote in the Democratic controlled Senate of 55-45 in 1969 after evidence of his strong belief in racial segregation and his anti-labor record, as evidenced by his years on the Court of Appeals for the Fourth Circuit, after appointment by President Dwight D. Eisenhower in 1957. In the era of Civil Rights legislation, it was simply unacceptable for such a justice to be confirmed. However, his replacement, G. Harold Carswell, was seen as an inferior, unqualified judge based on his record as a US District Court Judge in Florida, after being appointed by President Eisenhower in 1958. His record on civil rights and women’s rights was criticized, with his supporters claiming anti-Southern bias behind the opposition of Democrats to both nominees. When Republican Senator Roman Hruska opined that Carswell was mediocre, but that mediocre people in America deserved representation on the Court, and that everyone could not be a Louis Brandeis or Felix Frankfurter caliber judge, it sealed the defeat of Carswell by a 51-45 vote of the Senate.

Robert Bork presented a hard line conservative view in 1987; he believed in “originalism” and wanted to cut back on the civil rights and civil liberties decisions of the Earl Warren Court. Also, Bork had stepped in to fire Watergate Prosecutor Archibald Cox in October 1973, in his role as Acting Attorney General under Nixon, in an incident that came to be called the “Saturday Night Massacre.” Bork’s confrontational attitude before the Senate Judiciary Committee doomed his nomination, as he suffered a 58-42 roll call defeat of his nomination.

Reagan's second nominee, Douglas H. Ginsburg, backed out of the nomination to replace Bork once it was revealed that he had smoked marijuana as a student and a professor.

Harry Blackmun became the third choice of Richard Nixon after the rejection by the Democratic controlled Senate of Haynesworth and Carswell, and most legal observers expected him to be a traditional conservative justice, without the “baggage” the earlier two appointees had possessed. Instead, Blackmun evolved from a traditional conservative who often voted with fellow Minnesotan Chief Justice Warren Burger to a liberal. It was Blackmun who authored the most heated Supreme Court opinion of modern times, Roe v. Wade, giving women the right to an abortion in the first two trimesters of pregnancy. Although the 1973 vote was 7 to 2 (including Chief Justice Burger voting in the affirmative), Blackmum suffered death threats afterwards and required Secret Service protection for the remainder of his judicial career. Blackmun, an early supporter of the death penalty, became an opponent of capital punishment. At the start of his tenure he voted with the liberal Justice William Brennan 13 percent of the time, then 54.5 percent later in his first decade on the Court, then 77.6 percent of the time in the early 1980s, and finally 97.1 percent in the last years he served.

Anthony Kennedy became the third choice of Ronald Reagan after the rejection by the Democratic controlled Senate of Bork and Ginsburg in 1987, and he was seen after a decade on the Court as a “swing” vote on many decisions, along with Justice Sandra Day O’Connor, although Kennedy expressed his hatred of the term. Once O’Connor retired in 2005, it was clear that Kennedy was the decisive vote in a growing number of 5-4 decisions. He sided with conservatives about two-thirds of the time, but his votes the rest of the time often involved major liberal causes. Without Kennedy, gay rights and gay marriage would never have occurred by Court decision. Without Kennedy, abortion rights would be much more greatly curbed than they have been under recent Supreme Court actions. Without Kennedy, flag burning would not be constitutional, and affirmative action would be under greater attack in line with Republican dogma. The death penalty would be more widely used, even against juveniles and the mentally ill, which Kennedy was able to prevent. Kennedy also insured that detainees at Guantanamo Naval Base were entitled to Habeas Corpus rights in court proceedings.

So it is clear that the Senate rejection of two Supreme Court choices of both Richard Nixon and Ronald Reagan had a dramatic impact on Supreme Court history, as two Republican nominees turned out to be surprises in their jurisprudence, and have made the nation more humane and compassionate as a result.

The lesson? History is unpredictable.