What I Found When I Visited Japan’s Hiroshima Memorial

Fred Pearce is an award-winning author and journalist based in London. He has reported on environmental, science, and development issues from 85 countries over the past 20 years. His latest book is Fallout: Disasters, Lies, and the Legacy of the Nuclear Age (Beacon Press, 2018), from which this article is excerpted. 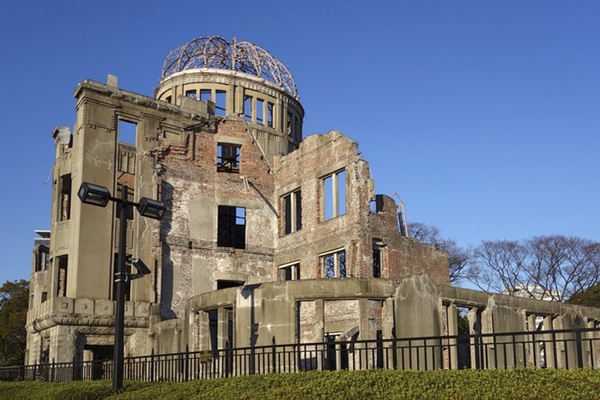 I think I was expecting a big memorial at ground zero in central Hiroshima, at the spot beneath where the world’s first atomic bomb exploded, blasting every building, triggering a firestorm, and vaporizing thousands of human beings. But the place of maximum destruction was marked only by a small plaque, set on a piece of marble the size of a parking meter and squeezed onto the sidewalk of a narrow street in front of a blank wall next to a carwash. I was there on commemoration day, seventy-one years after the blast. Someone had left a few flowers. As I watched from across the street, a family of Americans stopped for a couple of minutes to read the plaque. They took a selfie to send home. But everyone else walking down the street passed by without even noticing it. 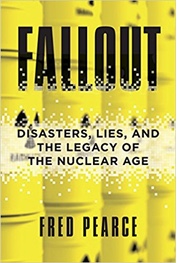 Hiroshima seems studiously unmoved by the past. It has more than a million inhabitants, four times as many as on the day the bomb struck. Mazda’s giant car factory in the suburbs has become a symbol of economic renewal; the Shinkansen bullet trains rush past on their raised tracks; the shopping malls are full of branded American goods. The streetcars still follow the routes they took in 1945, a ghostly memory of the past. But only five buildings in the entire center of Hiroshima survived the blast. Each has been preserved. One is the skeletal steel dome of the old Industrial Promotion Hall, beside the river. It is now a UNESCO World Heritage Site, and the most recognized symbol of what happened there. It is where tourists gather. A girl asked me to take her photograph, giving a thumbs-up and holding a fluffy toy.

I dropped into another, once the local headquarters of the Bank of Japan. The bulky classic stone building is just four hundred yards from ground zero. Today there are art exhibits inside. A small sign commemorates the building’s survival. It notes matter-of-factly that “two days after the bombing, the bank was up and running in a limited capacity, and other financial institutions in the city set up temporary offices in the building.” My jaw dropped at reading that. It seems that, even as the fires from the bomb continued to burn, as thousands of people were dying on the streets from radiation sickness, and bodies lay unburied, the business of money had resumed in Hiroshima.

I went to Hiroshima’s modern memorial museum, built in a plaza in the city’s peace park. The museum displayed several school uniforms left at home on the day the students went to create the firebreaks. There was the dress of first-year high school student Noriko Sado, donated by her mother, Mieko; and the trousers, boots, and hat of Koso Akita, a fifteen-year-old whose parents managed to get to him in the rubble before he died. I also found a school blouse donated by Futagawa, whom I had heard speak earlier. It had belonged to his older sister, who had been vaporized as she worked. He had wept as he told how he had found the blouse neatly folded in the back of a chest of drawers, after his eighty-seven-year-old mother had died. Throughout her life, he said, his mother had set her face against discussing the disaster that had befallen her family. The blouse, he said, “was the only thing left from her daughter, but she had never told us about it. I cannot imagine the suffering that lay behind that secret.”

The museum’s curators have shown a poignant regard for making sure every victim whose belongings are displayed is properly identified. So we know that the mangled tricycle in one room belonged to three-year-old Shinichi Tetsutani, whose father buried it with her but later had second thoughts and exhumed it for the museum. We learn that after the bomb dropped, Tsuneyo Okahara went to the office where her husband, forty-eight-year-old Masataro, had worked. She dug into the ruins in a desperate search for his remains. Eventually, on a desk, she discovered his lunchbox and ivory tobacco pipe—and bones in a chair at the desk. We are spared the bones, but the melted lunchbox and pipe were on display.

My day in Hiroshima had begun with the annual memorial ceremony, held in the peace park, created where the densely populated city-center neighborhood of Sarugaku-cho had once stood. The ceremony was a brief but somber affair, held at the hour the bomb had dropped. A peace bell was rung by bereaved families. There were short speeches by the mayor, the prime minister, and others; then the release of doves and, more democratically, the display of thousands of paper cranes made by participants, representing lost children.

Beyond the large tents housing invited guests, the crowds stood silently watching the events on TV screens, the sound of the music and speeches almost drowned out by cicadas in the trees. Many wore “No Nukes” stickers and fluttered fans with the same message. A few old people stood silently and remembered, their faces blank. Most were much younger, however. For them it was poignant history. Afterward, there were some, to my eyes, decidedly odd scenes of remembrance. A woman in a white evening dress sang in a quavering voice while her compatriot, also in evening dress, played a battered upright piano that had survived the blast. “The late Akiko’s A-bombed piano” read the sign in English.

I was struck by how unflinching everyone was. Nobody tried to spare their children the horrors of the bomb. The memorial ceremony told of a boy who saw “charred corpses blocked the road. An eerie stench filled my nose. A sea of fire spread as far as I could see. Hiroshima was a living hell.” Two sixth-grade students read a commitment to peace that began: “I smelled burning bodies. People’s skin had melted. They didn’t even look human.” In the museum, parents showed their young children large images of burned and mutilated victims, and read out the signs carrying exhaustive lists of symptoms of radiation sickness: “Bleeding from gums and nose as mucous membranes failed, hair loss, bone marrow failure, low blood-cell counts, intestinal bleeding,” and more. Some victims, the children learned, had literally coughed up their guts.

In my journey round the world exploring nuclear landscapes, I found that people often fantasized about the invisible effects of nuclear technologies. Here, where they had experienced the worst, there was a disturbingly brutal directness.

Equally striking—especially after watching the previous evening’s TV reports of boorish antiforeigner sentiment during the 2016 US presidential election campaign—was how little anti American rancor there was. None, in fact. Some expressed gratitude that President Barack Obama had visited the peace museum earlier in the year. Nobody, even when spoken to privately, had harsh words for the American tourists placidly viewing the commemorations. If the Japanese had dropped a similar bomb on mainland America, I could not image that Americans would be so uncensorious.

But there was something else. While the Hiroshima museum was very matter-of-fact about the bomb and its terrible effects, neither it nor the companion museum in Nagasaki mentioned that Japan surrendered a few days after the bombings, signaling the end of the Second World War. It seemed to me that Japan could contemplate the bombing with stoicism and dignity. The defeat, however, was too much.

As I left the museum, a woman staffing the exit approached everyone with a smile and a final message. “Please remember,” she said, “that within a month of the bomb, the grass across Hiroshima started to grow again.” Archive photographs behind her showed plants spreading rapidly along river banks and bursting through cracks in the roads, hiding the ash and invading the shattered buildings. It was “a message of hope,” she said. I needed it as I passed the memorial mound, which contained the remains of seventy thousand people whose bodies had been discovered around the city, but who were never identified. Nature’s resilience in the face of radiation became another motif of my travels through the world’s nuclear landscapes.

Copyright Fred Pearce. Excerpted and adapted from Fallout: Disasters, Lies, and the Legacy of the Nuclear Age by Fred Pearce (Beacon Press, 2018). Reprinted with permission from Beacon Press.