Anna-Lisa Cox is author of The Bone and Sinew of the Land: America's Forgotten Black Pioneers and the Struggle for Equality and is a fellow at Harvard University’s Hutchins Center for African and African American Research. 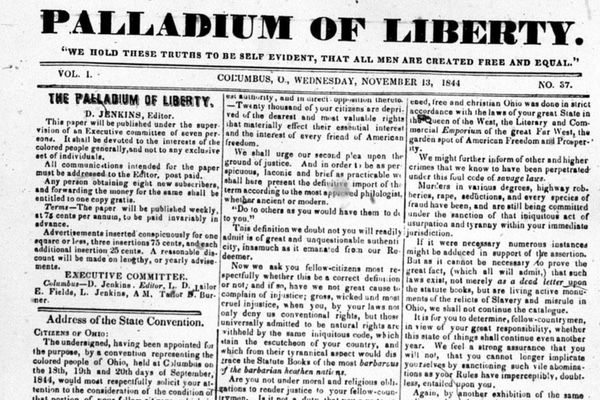 News story about the 1844 convention of African-Americans in Ohio

It’s 1851, in Gibson County, Indiana. And Keziah Grier is standing before the Gibson County clerk. She is nearing sixty, and the clerk is looking at her closely as he assesses her skin, the visible scars, the texture and color of her hair, her build. 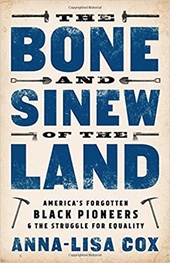 Did this remind Keziah of her childhood when she was enslaved in South Carolina, before she was brought in bondage to the Indiana Territory? By 1851 Keziah Grier had long been free, but she was still having to undergo this humiliating experience as if she were a slave on the auction block. A majority of whites in the state of Indiana had just ratified a new constitution requiring that she, and every African American residing in the state of Indiana, be recorded by the white officials in their county – officials African Americans were not allowed to vote for. These white officials did not want any new African Americans entering that state, and they had banned any further African American immigration into Indiana, even though African-descended people like Keziah Grier had been among the founding settlers of Indiana.

Keziah’s husband, Charles Grier, had chosen 40 acres of the best river-bottom land close to the Patokah and Wabash Rivers to be their first home. He bought it from the federal land agent’s office in Vincennes in 1813, before statehood, and when they had married in 1815 they had worked that land together. These were not just early days for Indiana, but for the nation. In 1813 the War of 1812 was just beginning. Indeed, it would be another year before Francis Scott Key would pen the lines that became our national anthem. Across the Atlantic, Jane Austen’s Pride and Prejudice had just been published.

By 1851 the Griers had grown their farm to almost 200 acres, raising their large family on that good land. They had succeeded in one of the harshest environments at that time – the frontier. But none of this protected them from injustice. This new state constitution was just the latest in a series of actions that whites had taken to strip them of their rights, starting with the loss of voting rights that the Northwest Territorial Ordinance of 1787 had once guaranteed to all property-owning men, whether black or white.

Of course, the Griers knew that the system of enslavement was the harshest of horrors that could be experienced by African Americans, and they had been secretly fighting against it by running an Underground Railroad route. Their friends, the Stormonts, were next up the line in Princeton, Indiana. Although the Stormonts were white, they were also Southern-born abolitionists like the Griers, and they trusted each other with their lives. That trust had recently been put to the test during the terrifying days that past spring of 1851, when they had tried to help Peter Still’s wife and children escape from bondage. Everyone knew Peter Still, the long-lost older brother of William Still, one of the most famous African American abolitionists in the nation. Closely connected to Frederick Douglass, William Lloyd Garrison, and many others, William Still had long been running a well-respected center in Philadelphia to help refugees from enslavement. While Peter Still was now free, his wife and children remained enslaved in Alabama, a state that now made it almost impossible to free enslaved people, even if their enslaver wanted to, and the Still family’s enslaver did not. So they fled to freedom, traveling with a young white man called Seth Concklin, who was pretending to be their owner.

But a few hours after they left from the Stormonts’ home Concklin was captured, the telegraph bringing industrialized efficiency to the hunting of freedom-seekers. The Griers would have known that Concklin and the Still family would be threatened and tortured to reveal who had helped them, and that soon they could face arrest or a lynch mob. Sure enough, just a few days later Concklin’s body was found half buried in the muddy banks of the river, wrapped in chains. The ones who first found him reported that it looked like half of his head was missing because it had been hit so hard by his torturers. But despite pain and death, Concklin kept the Griers safe, never revealing their secret.

The system of slavery was not the only system doing violence to the Griers and other free African Americans in the Northwest Territory states. The Northwest Territorial Ordinance of 1787 promised that the region would be free of slavery and deliberately did not mention race when describing the various civil rights due to free settlers of the region. But whites seemed intent upon stealing liberty and equality from their fellow Americans citizens. When Ohio became a state in 1803, the word “white” was added to the state’s constitution in order to ban the vote from the African Americans who were already successfully homesteading Ohio land. And Governor William Henry Harrison, almost as soon as he became governor of the Indiana Territory, a region that encompassed the current states of Indiana, Illinois, Michigan, and Wisconsin, took away the right of African-descended people to testify against a white person in court. This meant that the Griers were fighting two battles: one to free other people from enslavement and another to regain the rights that had been stolen from them.

They were not alone. African Americans across the former Northwest Territory were fighting against the growing injustice and inequality of the laws and politics of the states they had settled. In 1844 African Americans in Ohio gathered for one of their annual conventions, where they reminded their fellow Ohio residents that the theft of their rights was a terrible injustice, for “The Declaration of Independence, the American Bill of Rights, the Ordinance of 1787, as well as the political Creed of every intelligent, generous and patriotic freeman, are clearly violated, nay shamefully desecrated, by that feature of our constitution that renders the color of the skin a qualification for electors and suffrages.”

And now, after all they had fought for and all they had survived, the Griers were being required to register in Indiana because of the color of their skin.

Charles had gone first, the county clerk writing down: “Negro, dark complexion, stout built, 5ʹ 8 ½ inches high.” Then it was Keziah’s turn. Standing there in front of that white clerk, whose family may well have come to the county after she had, Keziah made her decision – she would not allow that clerk to touch her, to put a measuring stick anywhere near her. In the end he had to content himself with writing down, “Negro, dark complexion, light built.”

Keziah and Charles Grier would live to see the outbreak of the Civil War and the ending of slavery, as well as the reinstatement of Charles’s right to vote. They died in the 1870s, before they could see their state and the nation backlash once again, before the Ku Klux Klan rose with such force and violence in Indiana and across the Northwest Territory states that descendants of these African American pioneers had to fight for their lives.

Keziah Grier’s experience, and the experience of thousands like her, stands as a powerful reminder that despite the great triumph that Juneteenth represents, freedom is just the beginning.