Who Benefits from the “Booming Economy”?

Dr. Lawrence Wittner is Professor of History emeritus at SUNY/Albany and the author of Confronting the Bomb (Stanford University Press). 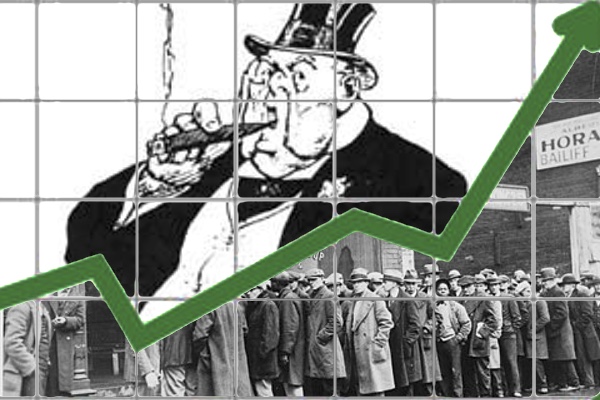 Buoyed by soaring corporate profits and stock prices, the richest Americans have reached new and dazzling heights of prosperity.  As of May 2018, the growing crop of billionaires included corporate owners with unprecedented levels of wealth like Jeff Bezos ($112 billion), Bill Gates ($90 billion), and Warren Buffet ($84 billion).  Some families have also grown fantastically rich, including the rightwing Koch brothers ($120 billion) and the Walton family, owners of Walmart (nearly $175 billion).  Together with the rest of America’s richest 1 percent, they possess nearly 40 percent of the nation’s wealth.

But a great many Americans are not doing nearly as well as the nation’s super-wealthy.  That 40 percent of the wealth, in fact, constitutes twice the total wealth held by the bottom 90 percent of the American public (about 294,000,000 people).  On May 17, 2018, the United Way released a study indicating that nearly half of American households could not afford basics like food, housing, and healthcare.  Many of the wage earners in these households were child care workers, home health aides, office assistants, and store clerks―people who had low-paying jobs and minuscule (if any) savings.

Furthermore, according to U.S. government statistics, some 41 million Americans live in poverty.  Of these, over 5 million reportedly live on $4 a day or less―at least as long as they continue living.  Life expectancy in some parts of the United States, for instance in Appalachia and the Mississippi Delta, is lower than in Bangladesh.

Employment income in the United States serves as another example of extreme economic inequality.  Drawing on information provided to the federal government by 225 Fortune 500 companies with total annual revenues of $6.3 trillion, a Congressional study released this May reported that the CEO-to-worker pay ratio―which stood at 25 to 1 in the 1965―has now reached 339 to 1.

Somewhat later this May, the AFL-CIO came out with its own report, revealing even greater economic inequality.  According to the labor federation, government figures revealed that CEOs of S&P 500 Index companies received, on average, $13.9 million in compensation during 2017―a 6.4 percent increase over the preceding year.  By contrast, the average production and nonsupervisory worker received only $38,613, producing CEO-to-worker pay ratio of 361 to 1.

As might be expected, corporations vigorously resisted providing this kind of information and reacted angrily to suggestions that there was anything wrong with the extreme disparities it disclosed.  “People have decisions to make as to whether they want to improve themselves and get higher paying jobs,” observed a CEO of a multibillion dollar company.  “Some people decide to do that and others don’t.”

This pull-yourself-up-by-your-own-bootstraps philosophy has long served as a top rationalization of privilege by the privileged.  And, indeed, corporate executives are very numerous in the ranks of today’s wealthiest Americans, now heading up about two-thirds of the households of America’s richest 1 percent.  But this philosophy should provide little comfort to American workers, whose share of the national income has been shrinking for decades.

American workers are not only extremely unlikely to ever amass riches comparable to those of the wealthiest 1 percent, but even to see their incomes improve significantly through wage increases.  Median real wages rose only one-fifth of 1 percent in the United States during 2017.  Furthermore, despite nearly full employment and the “booming economy,” the same pattern has persisted right up to the present.

The failure to share equitably in rapid economic growth has been a common feature of American history.  In “the roaring twenties,” a surging economy, characterized by economic expansion and a dizzying rise in stock prices, was accompanied by significant income and wealth disparity.  Although the rich got much richer, average workers experienced no more than a slow rise in income.  Indeed, workers in some industries suffered from falling wage rates.

Thus, soaring wealth and incomes for the few do not automatically translate into better lives for the many.  Centuries ago, American slaves understood this as they labored under the lash in booming economies―economies that included their full employment, but served only the interests of their ever-richer masters.  We should understand it as well.