Review of “Russians on Trump: Press Coverage and Commentary,” Edited by Laurence Bogoslaw 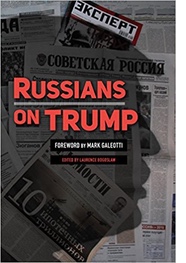 What do Russians think of Donald Trump? Does their thinking contain any insights about him?

The more than one hundred articles in “Russians on Trump”tell us a little about the first question, but they do not shed much new light on the motivations of his policies. One piece, citing poll data, indicates that in October 2016, almost five times as many Russians favored Trump as Hillary Clinton. Another article indicates that at about the same time only the Russians, out of people from 45 different countries, said they preferred Trump over Clinton.

Some of his popularity with Russians was no doubt due to his flattering remarks about Vladimir Putin and his expressed desire to improve U.S.-Russian relations. As one article from theMoscow Times (MT) indicates, however, Russian “state media . . . . were less for Trump, more staunchly against [Hillary] Clinton.” The same could be said for most Russians. Another MT essay criticizes Clinton for her statement of American exceptionalism, “We [the USA] are the indispensable nation.” Still another MT piece notes that “a Trump presidency would shatter the US political system and leave the country distracted and weak—hence Trump’s appeal to the Kremlin.”

As the above quotes indicate, the numerous and varied pieces in “Russians on Trump,” are primarily a reflection of the Russian press. The collection’s editor, an American translator and scholar, has collected them mainly from theCurrent Digest of the Russian Press, a weekly periodical of the same East View Press that has published the book being reviewed here.

In his Foreword, Russian-specialist Mark Galeotti points out that Russia is not “a totalitarian country in which the media all speak with a single voice, but nor is it wholly free.” Furthermore, “even as we seem to slip deeper into Cold War 2.0,” Russians and Westerners alike are having trouble grasping and agreeing “on what Donald Trump really is.”

As with U.S. media, there are both favorable and unfavorable pieces about Trump. One useful article, “White House and Television: Who Invented Donald Trump?” reminds us of how pivotal the support of Fox News was for Trump’s success in the USA. Although the Russian articles’ terminology is more varied than in Soviet days, Marxist terms occasionally appear. We can read here of the U. S. “ruling class,” or of a “superstructure that determines US domestic and foreign policy,” or of our government “serving the needs of the global capitalists.”

Although the editor provides Endnotes and a Timeline (from June 16, 2015 to October 30, 2017), readers receive little information about the authors of the various articles. For example, Vladimir Frolov wrote 13 of the collection’s pieces (the most of any contributor), but we are not told that he was once a press attaché to the U. S. Russian Embassy, and in 2001 the FBI claimed he was a “Russian spy.”

The editor does, however, provide a useful explanation of Trump’s mistaken claim that Putin called him a “genius.” The Russian word that Putin used was “yarky.” It can be translated as “brilliant,” “striking,” or “colorful,” but it “carries no connotation of intelligence.”

Although the collection contains eleven short pieces that predate Trump’s 2015-16 presidential campaign and a six-piece Epilogue, all the remaining selections (divided into four parts) deal with the campaign and the first two hundred days of Trump’s presidency. As with so much writing about political campaigning, many of the articles, often touching on what might be, no longer seem relevant. Among those that could still be of interest—partly due to the ongoing Mueller investigation regarding the connection of Trump and/or his campaign to the Russians—are those dealing with Trumpian Russian contacts and Trump’s foreign policy. Part Three is entitled “The Story of Trump’s ‘Russia Ties.’ ” Part Four deals with his foreign policy.

About the Russian connections, there is little new here except the varied Russian reactions to them, which are less critical than are Trump’s U. S. opponents’ responses. Regarding Trump’s foreign policy, there are multiple pieces on each of the following: Europe and NATO, Terrorism and the Middle East, Nuclear Policy and North Korea, and Russian-American relations.

The editor acknowledges that most Russian “journalists and political analysts” have found Trump’s foreign policy to be “inconsistent and unpredictable,” but, unlike many U. S. commentators, “they do not impugn his character, honesty, or intelligence.”

Overall, the foreign policy analysis recognizes that Trump is constrained by various institutional and other restrictions, including Congress, and that his policy options are limited. But few of the commenters seem to realize, as some of the U. S. press does, that Trump’s foreign policies, like his domestic policies, are driven primarily by his narcissism (see, e.g., here).

One U. S. analyst who recognized both Trump’s motivation and constraints in early 2018 was historian Andrew Bacevich, who wrote:“Trump seemed to think that, having won the presidency, he would be in a position to sort of serve as planetary dictator, that he would issue directives and the rest of the world would fall into line . . . . [but] external circumstances have constrained Trump, and on balance I think that’s a good thing.”

Trump’s narcissism does not exclude certain ideas (or perhaps “grievances” is a better word) from affecting his foreign-policy. In a previous essay, I mentioned that Bacevich and other “ethical realists” had indicated that the biggest failing of U.S. foreign policy was “its arrogance, its lack of humility.” Trump now magnifies that arrogance by projecting his own personal narcissism onto the national and international stages. Just as he often thinks that he is personally treated unfairly, so too he believes the USA has often been mistreated by other nations, has gotten a “raw deal.”

Typical were his recent comments about pulling out of the 2015 Joint Comprehensive Plan of Action (JCPOA), which the Obama administration and other foreign governments signed with Iran. “The fact is this was a horrible, one-sided deal that should have never, ever been made. It didn’t bring calm, it didn’t bring peace, and it never will.”

Occasionally, Russian commenters display laudable acuity regarding our president. For example, “Trump loves being praised. . . . has only a passing knowledge of the facts, but loves to gab and makes promises.” “He is extremely unpredictable.” In an insightful piece on Trump’s decision to pull out of the Paris Climate Agreement, he is quoted as saying the accord was “unfair” to the USA, and that he assumes that “the world is ready to take advantage of it.”

One of the most perceptive Russian observers of U. S.-Russian relations, Fyodor Lukyanov, in an article on Trump’s nuclear policy, writes that Trump seems to be harkening “back to the period that to him defines America’s golden age, the 1950s, when it wielded global might and influence, but without excessive commitments—and, most importantly, without political correctness. . . . As always, Trump is being grotesque . . . . Statements like Trump’s are risky, because they are not backed by any thought-out idea on how to change the system, but are driven by a desire to get rid of any restrictions in order to negotiate with one’s hands untied.”

The books “Epilogue” section concentrates mainly on the declining hopes for any improved U. S.-Russian relations. The main reasons given for the decline are the charges leveled against the Russians for “meddling” in the 2016 presidential election and subsequently, the passage, in the summer of 2017, of The Countering America's Adversaries Through Sanctions Act.

Since “Russians on Trump” was completed, important changes have occurred. Although Trump once stated that he himself is his own chief foreign policy adviser—in 2016 he responded to a question about whom he consults on foreign policy by saying, “I’m speaking with myself, number one, because I have a very good brain—the recent replacements of Secretary of State Rex Tillerson and National Security Advisor H. R. McMaster by Mike Pompeo and John Bolton, respectively, bring into Trump’s inner circle two more hawkish individuals. Both individuals seem more likely than their predecessors to provide Trump with the flattering agreeableness he likes to be surrounded by. In addition, Bolton has been especially critical of Putin. In 2014, he toldFox News that Putin “wants to re-establish Russian hegemony within the space of the former Soviet Union. Ukraine is the biggest prize, that’s what he’s after. The occupation of the Crimea is a step in that direction.”

In addition, U.S.-Chinese trade talks, the U.S pulling out of the “Iran deal” (JCPOA), and the changing relations between Trump and North Korean leader Kim Jong-un and their upcoming meeting in Singapore next month, all may have major effects on Trump’s foreign policy. What happens in regard to the Mueller investigation, which continues to examine what Trump knew about Russia's efforts to interfere in the 2016 presidential campaign, could also prove crucial.

What seems unlikely, however, even given Trump’s unpredictable behavior, is that U.S.-Soviet relations will greatly improve. A new book, Trump/Russia: A Definitive History, and further Mueller investigation revelations are likely to fuel more anti-Russian sentiments. A recent U. S. analysis of U. S.-Russian relations noted the present “absence of nuance on the Russia question . . . the embrace of Russia as America’s new-old supervillain.” One of the articles in the Epilogue

of Russians on Trump fears that a new generation of experts on both sides of the U. S.-Russian divide may become more confrontational.

The final article in this collection (written in November 2017) faults both the USA and Russia for lacking a “foreign policy strategy.” One might argue that Trump has one—make America (and himself) appear great—and Putin’s is to restore Russia’s greatness, but neither is a well-thought-out strategic vision. More than ever the USA needs a new foreign policy, one based neither on the narcissistic whims of our current president nor on a knee-jerk Russophobia, but on an ethical realism that soberly assesses Russia and the rest of the world and acts for both our own good and that of humanity as a whole.