Vaughn Davis Bornet’s Ph.D. is from Stanford University (1951), the B.A. and M.A. (1939, 1940) are from Emory University, the year 1941 was at University of Georgia. Author of over a dozen books and scores of articles and essays, he has been writing articles frequently in recent years on the internet’s History News Network. He holds “Distinguished” awards from American Heart Association and Freedoms Foundation. He taught at University of Miami, 1946-48, and Southern Oregon College, 1963-80. He was a staff member at The RAND Corporation in the 1960s. A Commander in the Naval Reserves, his active duty was 1941 to 1946. His 2016 books Lovers in Wartime, 1944 to 1945 and another, Happy Travel Diaries, 1925 to 1933 (both Amazon) are recent.  His latest is Seeking New Knowledge: A Research Historian’s Rewarding Career (Bornet Books). He lives, apparently only semi-retired, in Ashland, Oregon. 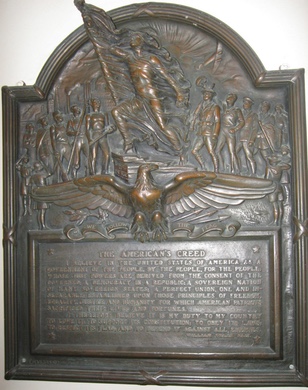 This piece is dedicated to Senator John McCain.

I can’t quite decide whether to offer the famous AMERICAN’S CREED at the beginning or at the end—or perhaps off to the side. Once offered, it somehow seems unlikely that readers will be warm to reading what I have managed to say on the subject, you see. Still; here it is, all 100 words:

whose just powers are derived from the consent of the governed;

a democracy in a republic;

a perfect union, one and inseparable;

established upon those principles of freedom, equality, justice, and humanity for which American patriots sacrificed their lives and fortunes.

I therefore believe it is my duty to my country to love it, to support its Constitution, to obey its laws; to respect its flag, and to defend it against all enemies.

I believe this wording to be exactly correct, although there is a slight difference of opinion in some locales on minor punctuation. It proclaims, quite correctly, “Accepted, April 3, 1918, by the House of Representatives on behalf of the American People. Written by William Tyler Page of Maryland.”

Page (who would rise to the conspicuous position of clerk of the House of Representatives) got a contest check for $1,000 from the mayor of Baltimore as winner over 3,000 other contestants nationally during the patriotic fervor of World War I. He didn’t keep the money, donating it to the purchase of Liberty Bonds, then giving them to a worthy cause.

I intend to dwell on the sentiments expressed by this famous but little quoted document for the rest of this essay, offering some extraneous observations along the way.

Although virtually everything about the Creed is upbeat, we have to begin, I think, a bit downbeat. I have come reluctantly to the opinion that our nation has descended for one year into a slump, displaying a noticeable decline in morale. There is even some diminution of hope for the future of our great and good country.

In writing this I quite recognize that those happy ones presently embarking on marriage, cheering the birth of a baby, watching the graduation of a youngster (and similar happenings) are at this moment in their lives pleased with a happy ascendancy. And still ….

One of our problems is domestic. It does seem that we are developing a political sickness—but if you are an open-minded American citizen reading this, one concentrating on the Greater Good, I don’t have to tell YOU.

Our children recite the Pledge of Allegiance quite often. (Maybe not if being home schooled.) The pledge is to “the flag” and “the Republic” and an indivisible nation that boasts liberty and justice—FOR ALL. Isn’t that enough? Maybe, but the Creed encompasses more.

One thing I like right away about the Creed is its identification of us as a “democracy” but also a “republic.” We get too big a dose of the former and too little of the latter—in my opinion, anyway. We select those to govern us at every level. It is as important to use republicanism to choose wise ones to govern us as it is to see to it that we are voting “democratically.” That’s my view, anyway.

The idea of our union being permanently (“one” and “inseparable”) is appropriate. As I write, apparently early attention is being devoted to the idea of splitting California into three states (LA gets a share; SF one; I forget what happens to Sacramento). No doubt some are thrilled at the possible prospect that (maybe) four liberals might just be added to the U. S. Senate! It’s been a long time since splitting the Union massively has been so seriously advanced! (Here in southern Oregon plus northern California there has been idle talk of a new State of Jefferson for many decades, but one has to laugh.)

A word in the Creed seldom included in patriotic places is “humanity”—but there it is. Since “freedom,” and “equality,” and “justice” are in the same phrase, we get the chance to decide for ourselves what such marvelous words mean in this context. Actually, I’m not at completely sure. What would please me would be linking these words with our immigrants in some obvious way.

Dwelling on that for a moment; like many readers, I have been ashamed at the treatment accorded the nearly million formerly young people who came here at someone else’s demand, grew up close to becoming complete Americans, and don’t get the time of day from either the majority or the minority in the Congress. Meanwhile the President wavers idly on the fate of these adopted Americans, who were brought here long ago, innocently, by adults from all over.

Under the government currently in power, there has been an open attack on immigrants—I won’t offer any of our President’s unpleasant words. What’s happened to the American Dream of early immigrants, the Puritans, Pennsylvanians, and land seekers on the American Frontier, and early Texans—the dream that our country would be molded into “one and inseparable”?

Another thing that I, as a veteran of World War II, like very much about the Creed is the peroration at its very close that enjoins us all “to defend it [this Nation] against all enemies.” That insistence, on the level of an order, is a good reminder. After all, now is a time when, increasingly, we are developing “military families.” With the draft long gone, there can be a bit of opportunism to “signing up.” But many in our youth wouldn’t consider donning a uniform for a minute!

Isn’t there some expectation that those who serve will be quickly rewarded with both health care and free higher education? (To be sure, it did turn out that veterans of our wars got rewarded, but a vast number went through Hell enroute.) Who is in our military, and who will be, has been changing, as all know.

It occurs to me that all who enlist should take a one-day seminar on this document, The American’s Creed. As I see it, having a large print version in the room during the discussion should be more than stimulating. (Nothing like that happened when I walked in that first day, September 25, 1941, I’ll tell you.)

I like that the Creed is totally coeducational (having been written on the eve of the 19th Amendment). And I like the reference to “patriots” who at that very moment (1918) were being attacked in France with tanks and poison gas or going down on ships being sunk by submarines.

The Creed begins with the asseveration “I believe…” which is a prelude that all can and should gravitate to as a framework for a worthwhile life.

Early on, the document says that the “powers” being used by our various governing bodies come “from the consent of the governed.” That, it seems to me, dear friends, is being obscured in today’s Washington, D. C. All kinds of weird ideas are being advanced, quite seriously indeed, as “consent” is taken for granted in advance by the White House and many appointed by it.

In practice, our elections increasingly are coming to belong to the fabulously, really unbelievably, rich. That famous legal caseCitizens United is becoming the very worst enemy of 18 year olds voting for the first time, and all the rest of us, too. Cash now counts more than ever before in American history! Purchase of votes through the massive seizure of Internet space, and super mass mailings, should not be countenanced. Votes are being bought by billionaires whose names have never been on any ballot—or anything (except maybe stocks and bonds).

Money and elections have always had an affinity for each other; but what is happening now as we approach the off year election of 2018 is, or can easily become, catastrophic.

So: here, I am advancing and praising The America’s Creed, a document dug up by me quite recently in a seldom opened desk drawer in my own bedroom. Can we all agree, here and now, that the beautiful principles it espouses are not to be allowed to deteriorate in such obscure places? Such is my fervent hope.

As one who is decidedly senior (I turned 100 recently), I will welcome any growing determination of America’s new generations to profit from ideas like those contained in The American’s Creed.

Believe. Speak out. Guide new generations. Keep the dream born and nurtured within our borders alive—now and forever.