David B. Parker, a native of North Carolina, is Professor of History at Kennesaw State University. He has written on humorist Bill Arp, evangelist Sam Jones, novelist Marian McCamy Sims, and other southern topics. 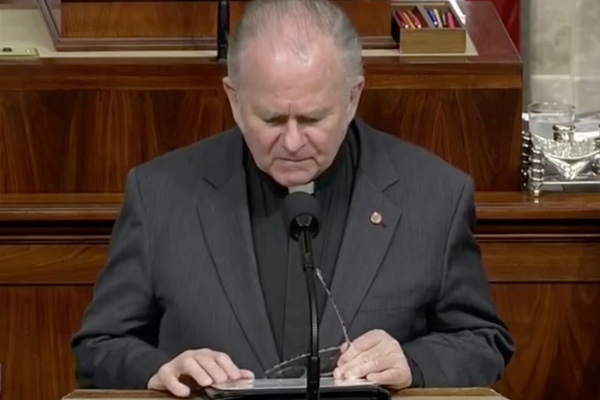 The process was puzzling, as was the cause of Ryan’s request. (Religion? Jonathan Burks, Ryan’s chief of staff, reportedly said, “Maybe it’s time that we had a chaplain that wasn’t a Catholic.” Politics? In a prayer during the debate over tax reform, Conroy said representatives should that find a plan with benefits that were “balanced and shared by all Americans.” Incompetence? Ryan told critics that “he had received complaints about Father Conroy’s pastoral care.”)

In any case, the story brings to mind James B. Hawthorne, a Baptist minister in Georgia who raised another issue: Whether we should have government-sponsored chaplains at all.

Rev. Hawthorne served Atlanta’s First Baptist church for a dozen years, from 1884 to 1896. He held strongly to the Baptist belief of “soul liberty,” the idea that God gave to every person the ability and the right to make their own choices in religious matters. Soul liberty means that no one has the right to impose a particular faith on another.Or, as Roger Williams (often called the first Baptist in America) put it, “Forced worship stinks in God’s Nostrils.” This is why Baptists reject infant baptism: baptism must wait until children are old enough to decide religious questions for themselves.

Many people today believe in the separation of church and state because they don’t want religion mucking up the government. For Williams, soul liberty meant the opposite: he didn’t want government mucking up religion. Rev. Hawthorne felt the same way.

On the occasion of his seventieth birthday and his retirement from the ministry, the Southern Baptist Convention asked Hawthorne to prepare an address “upon such subject as he may deem best.” His talk, delivered at the Convention’s 1907 meeting in Richmond, was titled “Some Things on Which It Behooves Baptists of This Generation to Put Supreme Emphasis.” A big thing in the nineteenth century was “Baptist successionism,” a denominational version of apostolic succession that said the Baptist church has existed in an unbroken chain since the days of John the Baptist. Hawthorne said “this generation” should worry less about that and more about “those principles that distinguish Baptists from all other Christian sects.” Primary among those ideas was “the doctrine of soul-liberty”: “No man is religiously free who is compelled by the strong arm of civil government to support any form of religion, and any interference of the civil power in matters of religion is a violation of, and an outrage upon, the rights of conscience.”

Hawthorne might not claim John the Baptist as a direct denominational ancestor, but in calling for “the absolute separation of religion from civil authority and power,” he certainly thought of Baptists as heirs to Roger Williams and others.

Soul liberty had several practical implications. In 1894, Hawthorne preached a sermon using John 18:36 as his text: “Jesus said, ‘My kingdom is not of this world.’ ” He began by criticizing the American Protective Association, an anti-Catholic group in the late nineteenth century, because it pushed for religious tests for office holders. “I am a Baptist,” he said, “and I stand here this morning to speak for Baptist principles and practices. No man can be a Baptist while he holds to any movement that is hostile to the freedom of conscience, in all matters pertaining to religion. The man who would establish a religious qualification for office is as unfit for membership in a Baptist church as Judas Iscariot was for the apostleship.”

Hawthorne argued that, by the same principle, churches should be taxed. “In exempting church property from religion,” he said, “the state patronizes religion.... This is a violation of the law of religious liberty, because it compels the Jew, the atheist, and the deist to contribute to the support of a religion which they repudiate.”

Finally, Hawthorne says that religious liberty dictates that the government not sponsor chaplains in the legislature or in the military. “If there is one man who more than another needs the benefit of public worship,” he noted, “it is the average congressman.... But it is not the duty of the government to provide these spiritual helps.”

Soul liberty and the separation of church and state were a big part of the Baptist heritage in America. This was true even in the Southern Baptist Convention, which formally approved a resolution in the 1970s “affirm[ing] our conviction about the limited role of government in dealing with matters relating to abortion.” Most Southern Baptists were perhaps anti-abortion, but they were also pro-choice. Historically, that has been the Baptist way.

Do a Google search for “Baptist distinctives,” and you’ll see that it’s still the Baptist way, although “soul liberty” and “separation of church and state” perhaps mean something different today. In 1980, Southern Baptists approved another resolution: “We favor appropriate legislation and/or a constitutional amendment prohibiting abortion except to save the life of the mother.” And maybe someone should give Southern Baptist Roy Moorea WWJBHD (“What Would J. B. Hawthorne Do?”) bracelet.

In any case, the story of Paul Ryan and the chaplain provides an opportunity to remember Rev. Hawthorne and “Some Things on Which It Behooves Baptists of This Generation to Put Supreme Emphasis.”