Do We Really Need a National Day of Prayer? 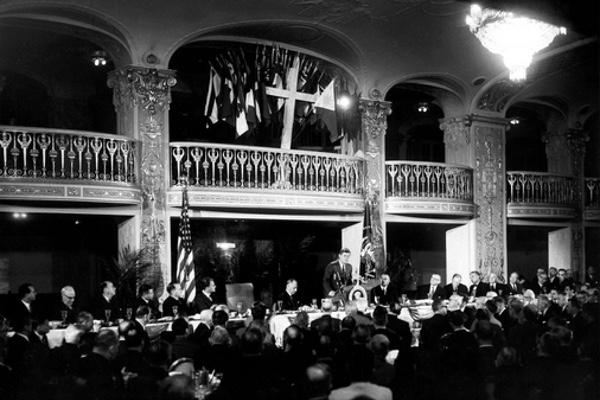 The modern National Day of Prayer has its roots in the Cold War Era, around the same time the National Prayer Breakfast was established, and the words “under God” were added to the Pledge of Allegiance. Although some might question its continuing value in an ostensibly secularizing nation, a look at its history shows that it might still be important.

There is a deeper history for days of prayer that go back to the American Revolution and even the tension leading up to the Revolution. It seems, then, that the call for a day of prayer is steeped in unrest and conflict. It was the late Reverend Billy Graham who called for a modern National Day of Prayer in 1952, when the Cold War was flaring hot in the Korean War. President Harry Truman signed the National Day of Prayer into law later that same year, indicating a national desire for such a day of religious observance.

This was a time when school children were being taught to “duck and cover” under their desks in the event of a nuclear attack, and so it is unsurprising that we would also see the reinstatement of this interreligious occasion. Soviet Communism was considered a real threat, and the National Day of Prayer was established to stand up to that threat by upholding American values of religious freedom. 1952 held some commonalities with 1775, when the first national day was established by the Continental Congress. The Founding Fathers “asked the colonies to pray for wisdom in forming a nation.” Similarly, in 1952, Congress and the President asked American citizens to meditate on the religious freedom guaranteed by the Constitution of their democratic nation.

Looking back on the rapid collapse of the Soviet Union, it is easy to dismiss the fears of the 1950s, but U.S. citizens were not in a position to take their enemy lightly. In 35 years, Russia had moved from little more than feudalism to being a nuclear superpower. That astonishing transformation looked quite serious and dangerous to people at the time, and was perfectly expressed in the confidence Soviet Premier Nikita Khrushchev displayed a few years later, when he proclaimed to the Western nations, “Whether you like it or not, history is on our side. We will bury you!” The Soviet Union had a stated goal of worldwide communist revolution as the best way to achieve justice for everybody, and brought with it an expansion of militant atheism. So the National Day of Prayer was not just a glib call to support the Cold War cause; people felt their religious freedom was explicitly being threatened.

We might expect that a tradition born at the height of the Cold War would fade, and indeed the law has been challenged in court (and the case was dismissed). But because this day recognizes religious diversity and is a call for people of all religions to unite and pray, its significance endures. Although this day has its roots in American Evangelicalism, it is no longer a specifically Evangelical observance, or even necessarily a Christian one. Once again, the National Day of Prayer is serving the needs of our own time, and now is becoming a truly interreligious phenomenon.

This year’s theme is “Pray for America–Unity.” The National Day of Prayer is intentionally held on a day that holds no religious significance for any one religion. It is held in “neutral territory,” so to speak, and is an open invitation to people of all faiths to pray in their own ways. Sometimes, people think of religion as something that divides us, and perhaps this is natural.  There is a great plurality of religions and philosophies, and they find much to debate about along the way, in their mutual search for truth. Indeed, the House of Representatives has just been engaging in embarrassing squawking about who their chaplain should be.

But people would be short-sighted to see such debate as being a problem of religion. Debate is a sign of health in a democracy. On the contrary, it has been one of the radical breakthroughs of the United States to see religious pluralism as a strength, rather than as a problem. Real pluralism is something that must always be lived and worked out, at each moment in history.

This year, the call is explicitly to think of religion as something that can and does unite us. Indeed, when we look at its history, unity is what National Day of Prayer has always been about.