What I'm Reading: An Interview with Chinese Historian Xu Guoqi 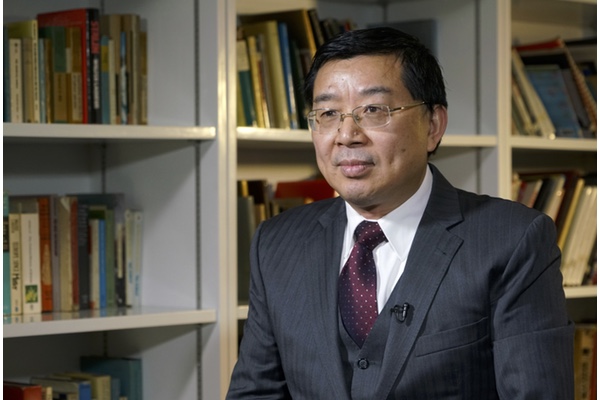 Xu Guoqi is Kerry Group professor in Globalization history at the University of Hong Kong. He received his doctoral degree from Harvard University under the supervision of Akira Iriye. He has published widely in both Chinese and English. His book, Olympic Dreams: China and Sports, 1895-2008(Harvard University Press), won the best book prize from the International Society of Olympic Historians. In 2015 he was awarded the Shigemitsu Fellowship from the global cultural center of the Japan Society of Boston for his scholarship and writing on contemporary international relations in Asia. His memoir in Chinese published last year has generated widespread interest and attention in China and an enlarged new edition will be issued in summer this year.

I have finished Shen Zhihua’s Last Middle Kingdom: Sino-North Korean Relations. I am currently reading Laura Spinney’s Pale Rider: The Spanish Flu of 1918 and How It Changed the World, David Goldblatt’s The Games: A Global History of the Olympics, and David Conn’s The Fall of the House of FIFA.

In different stages of my career, I actually have had different favorite history books. For instance, when I was a young scholar in China in the 1980s, William A. Williams’s Tragedy of American Diplomacyand Walter LaFeber’s New Empire, John K. Fairbank’s The United States and China, were my favorite books. In the 1990s when I was a doctoral student at Harvard, Samuel Huntington’s Clash of Civilizationsand Akira Iriye’s Power and Culturewere my favorite books. In the twentieth-first century, Eric Hobsbawm’s Timeseries were my favorite.

But three books stand out as my all-time favorite, although I am not sure they were considered as history books: Sima Qian’s Record of A Grand Historian, Confucius’ Analectsand Sun Tzu’s Art of War. These three books published thousands of years ago have fundamentally shaped my understanding of human nature and approaches to history. Whenever I feel dumb and get lost, I pick them up and read.

To be honest, I did not choose history as my career. I grew up in a household which did not have an educated member at least for eight generations until me. I was not interested in history but I was forced to study history when I grew up in China.

From whatever perspective, to study history is dangerous in a place like China, past and present. The first historian Sima Qian was castrated when he disagreed with an emperor about two thousand years ago. During Mao Zedong’s Cultural Revolution, historians were his favorite targets and many distinguished historians were abused to death or committed suicide.

When I was a kid, I really wanted to become a mathematician. Mathematics seemed to me as being safe, fun and needed no equipment, just a beautiful and brilliant mind! To make a long story short, however, I was eventually assigned to major in history after I passed a national college entry exam in 1980. I tried to change my major but failed. The rest is history and the world thus gets a professional historian. I still have a fancy idea even today that I might be a great mathematician and I would be better off personally as a mathematician.

Dr. Hu Shi, who was a former student of John Dewey at Columbia University and a historian, declared that one has to have a first-rate mind plus a strong work ethic to be a good historian. He is absolute right here. To be a historian, no matter how smart one is, he or she has to work extremely hard by reading widely and consulting all materials available. There is no shortcut. As a Chinese saying put it well: without ingredients, even the best cook cannot cook a meal. It seems to me a fine historian even needs more qualities such as open-mindedness, cultural sensitivity and broad-based knowledge of the world and multilingual skills, among other factors.

I am lucky in a sense that I grew up in the countryside in China when Mao was still alive (which helped me develop a complicated mindset about history and reality), trained at Harvard University, have taught and written history in both the U.S. and Asia. If one understands and knows both Chinese and American history (as well as world history) and is at home in both places culturally, that person should have a certain quality to be a fine historian. If I have any qualities, I guess this personal and academic background might provide some.

I have written on subjects which spread to many centuries and many countries. But the period that; is most fascinating to me is the broadly defined period of the First World War, from 1895 to 1923. It seems to me that this is really an important and fascinating period for the following reasons: first, western civilization went through a war which almost destroyed it. Second, the non-western people helped save the western civilization by providing human and material support, and by fighting another western power such as Germany. Third, a brand new type of political system popped up, namely socialism, which still affects the world such as in China today. Fourth, during the same time, nearly all countries in the world were searching for answers to the question “who are we?” I am so fascinated by this period that I wrote several books about it, including China and the Great War,Strangers on the Western Front, and Asia and the Great War.

At least three: Yang Shengmao, Akira Iriye, and Ernest R. May. Professor Yang was educated at Berkeley and Stanford before he returned to China in 1946 and became a distinguished historian at Nankai University. He taught me how to be a good scholar and also a decent human being living in an immoral society. Professor Iriye was my advisor at Harvard who has since served as my lifelong inspiration and role model. I was Professor May’s teaching fellow for his course on the Vietnam War at Harvard. From him I learned jokes can become an effective part of history learning and thinking. Nearly a quarter of a century later, I still remember freshly his stories and jokes about LBJ and the CIA!

What are your hopes for world and social history as a discipline?

Since the 1990s there have been a lot of discussions about the clash of civilizations, the decline of the west, and the rise of globalization and internationalization. In the twenty-first century, frequent trans-border flow of ideas, goods, and humans, as well as germs and other bad stuff, I am very optimistic for the state of world and social history as a discipline and their future. To live in such a fluid and constantly changing world and time, we all need to seek guidance from world and social history just like a traveler in an unfamiliar place needs a map. I hope all historians in the world will be united to pay more attention to other countries, other cultures, and societies. I hope we are more attentive to marginalized peoples, groups and forgotten histories. I hope our world and social history are less biased, have fewer ignorant assertions, and possess more understanding and open-mindedness for the topics we don’t know. When there is a will, there is a way! The famous Chinese writer Lu Xun once declared, there was no road in the world in the beginning. Roads started to take shape and exist when more and more people started to walk in the same directions! This argument can serve as my hope for world and social history as a discipline.

All of my topics I chose to write about so far have been long ignored and transnational in scope. For example, I have argued why China mattered to the First World War, how the Chinese used international sports to seek answers to questions such as “what is China and Chineseness.” I also wrote several books on shared history: how Chinese and Americans contributed to each other’s national development and how the First World War became a shared history among Asians.

It has been both rewarding and joyful when I realized that each of my books has had impact on how people think about Chinese and world history and affected my fellow historians’ attitudes about the academic importance and significance of my chosen topics. For example, when the world has been commemorating the centennial legacy of the First World War, they cannot ignore the roles China and Asia played in the war and the war’s significant impact on the Asian nations due to my works. My arguments about 140,000 Chinese workers in the Western Front during the First World War have been accepted by both professional historians and general society. When Sino-American relations becomes a hot topic for policy-makers and China watchers and most people have focused on the differences and confrontations between the two countries, my book, Chinese and Americans: A Shared History,reminds everyone there is a different kind of history between them in the past. My book, Olympic Dreams: China and Sports, 1895-2008, has fundamentally changed perceptions of sports in China’s role in the world.

Chinese would like to discuss things with the perspective of yin and yang. The other side of rewarding is frustration. I am frustrated when I realized I don’t belong to any established history field in China since the history field there is subdivided into Chinese history and world history, then further divided respectively as pre-modern history or modern history. But what I have done has covered both China and other countries, pre-modern and modern. I am so frustrated by my professional identity crisis that I wrote a memoir last year in Chinese with a title roughly put: Random Thoughts of a Scholar Who is on Edge(边缘人偶记). I was also frustrated that although Chinese presses have bought Chinese version rights to translate my works in English into Chinese, only two of them were able to reach Chinese readers, with many deletions of my original words here and there. Three other books are still waiting for the censor’s verdict.

A lot. I came to the U.S. with the intention to study diplomatic history. I soon realized the field is dead. It seems to me that the major changes in the last two decades are that historians in the west moved from nation-state history to transnational history, from big men’s history to gender and cultural studies.

I have many. But my all-time favorite is an ancient Chinese saying:前事不忘,后事之 师，namely those who remember the past will be masters of the future. When I worked on my series on shared history, I repeatedly declared that all history is shared. I am not sure it will hold water, and I am still working on my own history-related sayings.