100 Years Ago this Week, During WW 1, a German-American Was Lynched 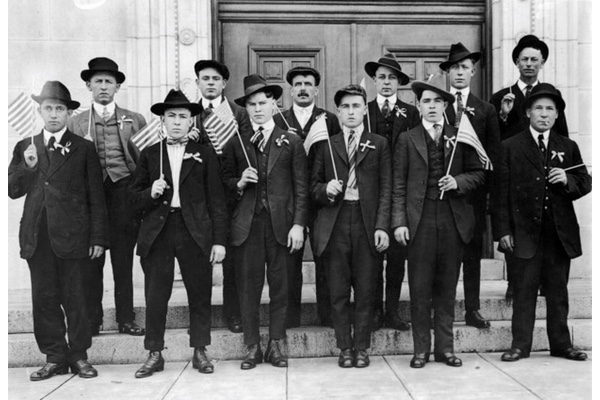 The 11 men accused of lynching Robert Paul Prager. (The man in the back on the far right is a sheriff’s deputy.)

On the outskirts of Collinsville, Illinois, in the early hours of April 5, 1918, a small group of men lynched German immigrant Robert Paul Prager. Born in Dresden, Prager had come to America in 1905 looking for opportunity. Traveling through the Midwest, he worked as a skilled union baker, and during World War I he obtained work as a laborer in an area coal mine. Prager’s killers accused him of spying for the German army. They said that he had plotted to blow up the mine where he worked. Some thought he was a dangerous Socialist who had opposed American entry into World War I. Others would later add the charge that Prager was a “white-slaver” trafficking in young women. Although no solid evidence of Prager’s alleged espionage or terrorism or immoral activities surfaced in the weeks following his death, a jury took only forty-five minutes to acquit the accused lynchers. The men who killed Prager, they said, were patriots. 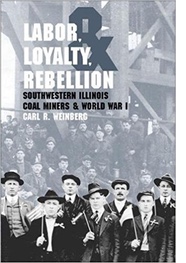 Over the last century, the Prager lynching has served as a cautionary tale about the dangers of war hysteria. The town of Collinsville, then a booming coal mining center, now a bedroom community near St. Louis, has never lived the incident down. It seemed then and now to illustrate the worst of small-town, ignorant, flag-waving, mindless patriotism. But appearances can deceive. The real story behind the Prager lynching can teach a surprisingly inspiring lesson about the capacities of ordinary working people.

Let’s begin with Joseph Riegel, another German-American coal miner and the ringleader of Prager’s lynch mob. Like all Illinois coal diggers, Riegel belonged to District 12 of the United Mine Workers of America (UMWA). Unlike mining districts in West Virginia, Kentucky, and parts of Pennsylvania, Illinois was 100 percent union. Every coal mine in the Land of Lincoln was a union mine. The state’s 90,000 union miners had a reputation for left-wing radicalism. Many voted for Socialist Party candidates and elected miners to local offices. The party’s national secretary was Adolph Germer, a former coal miner from Mt. Olive. But the miners were also politically divided. More conservative miners were represented by Frank Farrington, who served as president of District 12 during the war. While Socialist miners said that America’s war to “make the world safe for democracy” was a scam to make money for American profiteers, Farrington went overboard to boost the American war effort and keep miners on the job.

Rank-and-file miners like Joseph Riegel were caught in the political crossfire. In July 1917, after the US entered the war, the high cost of living spurred a group of Collinsville miners, including Riegel, to go on strike. Mose Johnson, a local UMWA official allied with Farrington, tried to get the miners back to work. He spread the rumor that German spies were behind the strike. He argued with striking miners in the union hall. And when the dispute spilled into the street, Johnson threw Riegel to the ground and sent him to the hospital with a dislocated elbow. The message was clear—if you were loyal to your fellow workers you were disloyal to your country. 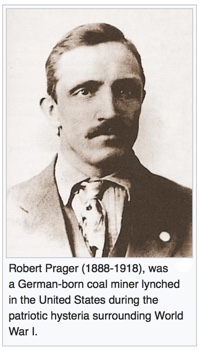 But wartime coal mining strikes continued. From April to October 1917, some 25,000 Illinois miners walked off the job. They put their lives at risk every day. Since coal companies were making wartime profits hand over foot, miners figured they were entitled to their fair share. The Wilson Administration was alarmed. The American war economy ran on coal. In collaboration with coal companies and union officials, they pulled out all the stops to get the coal miners back to work. US Secretary of Labor William B. Wilson, himself a former coal miner, told Illinois miners that America was like a union that had declared a “strike against the tyranny of the German government.” By going on strike against American coal operators, the striking miners were the real scabs. They were traitors to the American cause. Rebel workers like Joseph Riegel were under tremendous pressure to prove just how loyal they were.

In early 1918, as American troops began to fight and die in the bloody trenches of Europe, pressure built up at home to silence dissent. George Creel, who headed up President Wilson’s war propaganda agency, promised to “weld” American pro-war sentiment into “one white-hot mass instinct.” Clamor grew for a Sedition Act—passed after Prager’s lynching—that would make opposing the war illegal. In small towns throughout Illinois, local superpatriots accosted suspected “pro-Germans” on the street. They made them kiss the American flag. They made them sing patriotic songs. And in Robert Prager’s case, they went further, stringing him up on a hackberry tree on the edge of town. Joseph Riegel had proved his case—no one could call him a slacker now. He was a true American. The lynching served to keep dissenting voices quiet for the remainder of the war. And Illinois miners stayed on the job.

But as soon as World War I came to a close, a new class war erupted around the country. The Nation magazine called it “the unprecedented revolt of the rank and file.” Illinois miners—including Robert Prager’s former coworkers—participated in a protest strike in support of socialist Tom Mooney, falsely accused of setting a bomb in a patriotic parade. When they were punished for that strike under wartime regulations (still in effect based on a technicality), they rebelled against state UMWA officials and demanded a militant program that emboldened the union to call a national strike in November 1919. Betrayed by both Democrats and Republicans, many miners voted for candidates of the newly-organized Labor Party. They even called for the Wilson Administration to withdraw troops from Soviet Russia, where American troops fought the new Bolshevik revolutionary government. Illinois miners transformed George Creel’s “white-hot mass instinct” into a white-hot class instinct that promoted the collective struggle for a better world.

The men who lynched Robert Prager brought World War I home to Collinsville. Like millions of working people throughout Europe, Asia, and Africa, who fought for their respective rulers in the trenches, they killed one of their own. The war dealt a powerful blow to the cause of working-class solidarity. It tore people apart. But the fanatical patriotic sentiment in Collinsville has to be understood in the context of the intense class conflict that rocked the Illinois coalfields during and after the war. In a real sense, Prager’s lynching was a perverse tribute to the impressively high level of labor solidarity that working people had achieved.