Historians/History
tags: Richard the Lionheart, Eleanor of Aquitaine, Richard I

by W. B. Bartlett

W. B. Bartlett has worked across the globe in almost twenty countries and has spent time in over fifty. He is the author of many history books including, his latest, Richard the Lionheart: The Crusader King of England (Amberley Publishing, 2018). 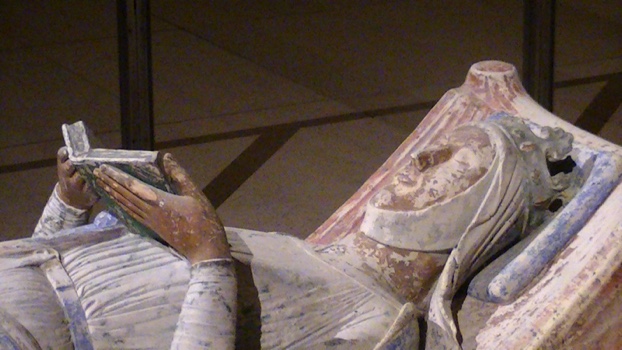 Effigy of Eleanor of Aquitaine in the church of Fontevraud Abbey - By Adam Bishop - Own work, CC BY-SA 3.0

Richard I (king of England from 1189 to 1199) is a man and a monarch probably best remembered for his role as a warrior. Much of his adult life was spent campaigning away from home, most famously during the Crusades. However, in terms of time spent he was campaigning for much longer periods in France both before and after his journey to the Holy Land (or Outremer, as it was known to the crusaders). He also spent over a year in captivity on his way home from Outremer. Much of his time away was spent mainly in the company of men; it was a famous maxim that only laundrywomen were allowed to go on his crusade for example (though one which was very superficially complied with). Therefore, it might appear that women played little part in his life; but this would be far away from the reality. 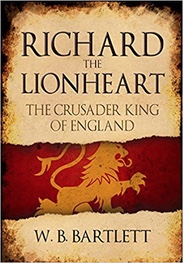 Most influential of these female personalities was the most famous woman in his life, his mother, Eleanor of Aquitaine. She was an extraordinary personality, wife at one time of the king of France before taking on the same role with Henry II of England. When Henry’s sons rebelled against his rule, she was the one who suffered the most when their uprising was crushed (she was seen by Henry as its prime motivator). As a result, Eleanor spent 15 years under house arrest, living reasonably comfortably but without any opportunity of deploying her considerable political talents to good effect.

But when Henry II died and Richard inherited the English throne, she quickly threw her energies into becoming the new king’s main supporter in England. When shortly afterwards Richard left on his crusade, she played a pivotal role in running the government of the country (though in those very different times the main formal roles were left in the hands of men). When her youngest son John was later implicated in plots against Richard, it was Eleanor who led the resistance to him, proving a worthy lieutenant in the king’s absence. It was significantly thanks to her that Richard had a kingdom to come back to at all.

The indications we have suggest that Eleanor and Richard were close. She effectively brought him up from the time he was about eight years old when they lived together in Aquitaine. She was indefatigable in supporting him throughout his kingship and he relied on her support and acumen considerably. And when he died a premature death, expiring due to infection after being struck by a crossbow bolt, she led the mourners at his funeral at the revered nunnery at Fontevrault where Richard, and eventually Eleanor, were buried.

The relationship between Richard and Eleanor was very different from the one he had with his wife, Berengaria. It must have come as a surprise to many when the marriage in 1191 took place at all, for Richard had already been betrothed for over two decades – not to Berengaria but to Alice, sister of the French king, Philip. Alice was unceremoniously abandoned – gossips said that she had been involved in an illicit relationship with Henry II – and Berengaria became Richard’s bride when they married on Cyprus, where Richard was in the process of conquering the island.

Berengaria went on with Richard to Outremer but they spent most of their time there apart (the “laundrywomen only” rule was applied for a time though it was later relaxed). Then when Richard left the region and started for England, he and Berengaria travelled separately. Richard was captured and held for ransom and, although Berengaria worked hard for his release, they remained separated for a time. Even after his subsequent release and return to England they spent little time together.

There was little apparent warmth in their relationship. There were occasional reports that suggested physical intimacy between them but they were few and far between. Even at the end, it was Eleanor who attended Richard’s funeral and not Berengaria. Richard’s widow never remarried though, living out her life (which lasted several decades longer) in Le Mans, where she earned a reputation for simple living and piety. All in all, the indications are of a married life that was based mainly on political considerations rather than affection. Berengaria came from Navarre, a region now in Spain just over the borders from the south of France, which could and did prove a useful ally to Richard; that seems to have been far more of an attraction than any deep sense of romantic attachment.

Political considerations were probably behind Richard’s relationship with his sister Joanna too. Joanna married William II, king of Sicily, where she seems to have lived a complicated life; he allegedly kept a harem – Sicily had been heavily influenced by contemporary Islamic culture – so things cannot have been easy for her. They got worse though when William died and a usurper, Tancred, became king. She was thrown into prison and her future seemed extremely uncertain.

Fortunately, through an accident of timing she was rescued by Richard. He passed through Sicily on his way east and managed to force Joanna’s release. She then accompanied him to Outremer, though she spent most of her time there with Berengaria. Whilst there, Richard hatched a radical scheme to advance his interests which involved marrying off Joanna to Al-‘Adil, brother to the Muslim leader Saladin. The scheme came to nothing, allegedly because Richard had not told her of his plans and she was furious when she eventually found out.

In the company of Berengaria and Joanna in Outremer was a mysterious third woman. Called only The Damsel of Cyprus we do not even know her name. She was the daughter of Isaac Comnenus, king of Cyprus, who had been captured by Richard en route to Outremer. She effectively remained his prisoner and played a shadowy part in Richard’s life – some accounts say that he was infatuated with her – but the fact remains we know very little about her. But the three women, Berengaria, Joanna and the unnamed Damsel effectively formed a close coterie for the next few years.

Of these women, only Eleanor can claim to have played a significant part in Richard’s life and career. What roles Berengaria and Joanna played seems to have been almost exclusively political rather than based on any deep emotion. Marital politics in medieval times were largely about the making of strategic alliances though this did not necessarily exclude romantic attachment. But as far as Richard is concerned, there seems to have been little room in his life for deep attachment to any woman other than Eleanor; and then possibly only because of the undoubted support she brought in strengthening his political position.