So How Should We Think About Sherman’s March?

J.D. Dickey is the author of Rising in Flames: Sherman’s March and the Fight for a New Nation, to be published in June by Pegasus Books. 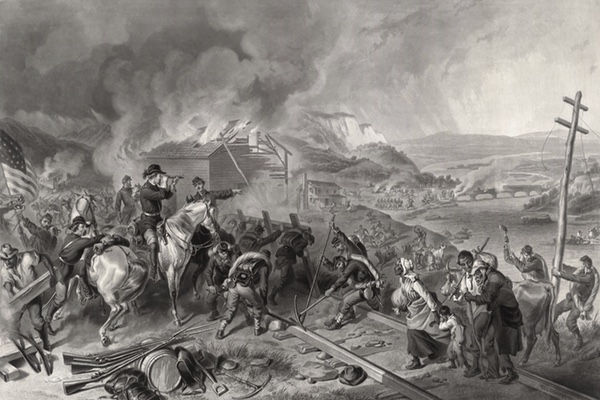 Although now more than a century and a half in the past, the Civil War is a subject that always seems to be present in the news. Whether cities are debating whether to remove statues of Confederate generals or parents are disputing how school textbooks should cover the conflict, passions over the war remain strong in many parts of the country. Many figures from that time remain controversial, but few have inspired more praise and contempt, often at the same time, than William Sherman. 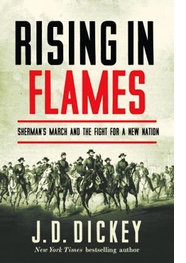 General Sherman is, of course, most noted for his March to the Sea, which took place during the Civil War, in November and December 1864, through central and southern Georgia. Sherman led a force of 60,000 men over 300 miles of farmland, pine barrens and swamps, and ordered his troops to steal provisions and livestock, to burn any infrastructure that might support the Confederate war economy—from cotton gins to railroad lines—and to damage not only the South's material resources, but its people's will to fight. While Sherman's March was the general's most notable military action, it was only part of a larger series of campaigns he waged in 1864 and 1865 that also devastated large sections of the Carolinas and led to the burning of numerous Georgia towns, Atlanta foremost among them. The strategy behind Sherman's invasion, which he called "hard war," proved to be highly successful and led later military figures toward the notion of "total war," in which an enemy's population would become a target as much as its troops.

Despite Sherman's undeniable influence in military circles, in popular consciousness his legacy has never been fixed. Each era, including our own, has focused on different aspects of his war-fighting and the way he stands in support of or opposition to the social values of the time. He has shifted from hero to villain, and back again, depending on who's writing the history and what kind of William Sherman they want to depict.

In the early days of the war, newspapers and politicians ridiculed General Sherman for his inept leadership of the Department of the Cumberland and his attendant paranoia and, some said, lunacy. He redeemed his reputation at battlegrounds like Shiloh and Vicksburg, but only during his invasion of Georgia did he find widespread acclaim. Indeed, throughout these campaigns, the North reacted with great enthusiasm, even delight, for the general's brazen, unabashed actions. Some politicians and newspapers described him as a noble conqueror, as the "head of his heroic legions," while calling the March to the Sea "one grand continuous holiday excursion." And this view held for many years after the conflict. Songs like Henry Clay Work's "Marching Through Georgia" prompted a lively martial spirit among Union veterans, while some thought Sherman might make a good commanding general of the U.S. Army (which he became in later years) or even president of the U.S. itself (which he famously refused to consider).

Surprisingly, the initial postwar view of Sherman in some parts of the South was not as malignant as it would later become. He had been the superintendent of a Louisiana military academy before the war and had generally liked the region's residents (though not its secessionists). With his openly racist rhetoric, no one would have confused Sherman for an abolitionist. He prohibited the arming of black troops in his forces, and he advocated a policy of leniency for the South during Reconstruction, despite the widespread outbreak of racial violence spurred by terror groups such as the Ku Klux Klan. Even as late as 1879 Sherman was not universally seen as a pariah by Southerners, and was welcomed back to Atlanta by the town's business leaders, in hopes his approval would bring a wave of Northern investment for the rebuilt city.

The Southern attitude began to shift dramatically in the 1880s, first with Jefferson Davis's memoir, The Rise and Fall of the Confederate Government, in which the former Confederate leader condemned the general as a vandal and menace; and later with the publication of diaries and journals of Southern women like Dolly Lunt Burge, Fanny Cohen and Mary Chesnut, which described the depredations of Sherman's marchers in grim detail. This cast the die, and by the 1930s books like Gone with the Wind depicted the general's campaigns as a study in cruelty, based on the "Lost Cause" mythology of the South as a rural arcadia of genteel manners and gallant customs, ruined by the onslaught of mechanized Yankee warfare. Most Southerners came to believe in the idea of Sherman as a barbarian, along with a fair portion of Northerners, too.

Many Southerners still hold to this perspective, in part because the terror and devastation of the invasion are factual—keenly recalled in family sagas, commemorated in wartime photography, and recorded in official accounts. However, another significant legacy of Sherman's campaigns was consciously ignored in the South, and that was the general's role as an unexpected liberator.

More than 10,000 slaves left their bondage on Southern plantations and farmsteads during the invasion, with many of them following the Union army columns or otherwise escaping and fleeing North. While the general often saw them as a hindrance to his army's progress, he could not prevent them from seeking freedom. Thus, while Sherman opposed abolition in law, he not only enacted it in practice, he did more to enable the liberation of the enslaved than any other figure in the U.S., including President Lincoln. And it was this modern understanding of Sherman's role that led to his most recent transformation.

From the 1960s onward, the Lost Cause declined in historical favor, replaced by a emphasis on slavery's prominent role in starting the Civil War. No longer was the conflict chalked up to a simple battle over "states' rights"; rather, contemporary writers began to see those rights had been deployed in support of human bondage, and the preservation of a racial caste system enforced through terror and violence. Accordingly, a new generation of historians saw Sherman's campaigns as a means of crushing that system, and destroying the material foundations for its existence—ruining the gins, the workhouses, the spaces where slaves toiled, torching the plantations that held them, and giving them the opportunity to escape if they so desired. As the general said to one former slave: "Go when you like,—we don't force any to become soldiers…and will pay you if you choose to come [to assist the army]." In the new histories, no longer was Sherman simply a demon; he was an avenging angel, of sorts.

This revised idea—of Sherman as liberator—did not supersede his reputation as a thief and vandal, however. Rather it took its place alongside the markedly different, much harsher view of the man to create a strange hybrid portrait. These days, perspectives on Sherman, unlike those of many other figures, do not break down according to simple ideological divisions between right and left. Rather, Northern historians have often praised him, from conservative Victor Davis Hanson arguing that "destroying an enemy's ability to wage war is more moral, and expeditious, than slaughtering its youth" to progressive Eric Foner describing his invasion as bringing "a 'grand jubilee of freedom', a vast outpouring of celebration and pride" for blacks in liberated cities. At the same time, Southern authors of a variety of stripes continue to be wary or outright hostile to the memory of the general—with John B. Walters even titling one biography Merchant of Terror—while other historians advance new perspectives from alternative angles. In my own book, Rising in Flames, I examine how his invasion had as great a role in changing the social and cultural landscape of the North as it did in damaging the physical landscape of the South. The general thus had an even greater role in reshaping the nation than even he may have realized.

In the end, regardless of sectional bias, thoughtful historians know Sherman can never be fully celebrated or condemned, because to do the former is to approve of his policy of thievery and arson against civilians (not all of whom were white slaveholders), while to do the latter is to ignore his role in smashing plantation slavery. Sherman himself understood this duality, and the way historical reputations are ever-changing, depending on the needs and sympathies of a given time. As he wrote in the weeks before the March to the Sea, "In revolutions men fall and rise. Long before this War is over, much as you hear me praised now, you may hear me cursed and insulted. Read History, Read Coriolanus, and you will see the true measure of popular applause. Grant, Sheridan and I are now the popular favorites, but neither of us will survive this war. Some other must rise greater than either of us, and he has not yet manifested himself." Sherman in fact did outlast the war, but 150 years later, his reputation is still fighting the last battle.