Chad Carlson is an associate professor of kinesiology and Assistant Men’s Basketball coach at Hope College in Holland, Mich. He is the author of Making March Madness: The Early Years and Origins of College Basketball’s Postseason Championships. 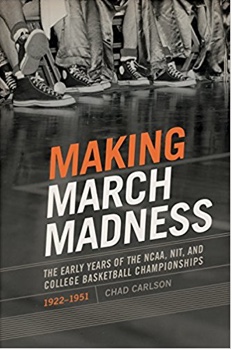 The madness of March is nothing new.

In 1942, the fifth annual National Invitation Tournament (NIT) in New York City was a big deal. One year older than the NCAA tournament, more popular, and a whole lot richer, this was the premier event. The NIT’s local selection committee decided to seed its eight entrants for the first time. One played eight. Two played seven. And so on.

On the first day of competition, the unthinkable happened. The eighth, seventh, and sixth seeds won. And at the end of the event, the eighth seed—the team least likely to win (West Virginia)—left the court holding the trophy. West Virginia was a world away from the basketball mecca of New York City, and the local sportswriters and collegiate athletic directors who seeded the Mountaineers eighth ate crow. Little did they know how often upsets would occur in single-elimination tournaments involving teams of college kids. But they knew enough to stop officially seeding teams again until 1949—it made them look that bad.

Amid all of college basketball’s Cinderella stories, this one is not well known. But it might be the best. Every game but two in that entire tournament was an upset, and the lowest seed won it all. Tournament administrators came close to publicly apologizing, believing they had misled the public. But the public loved it!

The NCAA overtook the NIT in terms of popularity and prestige throughout the 1940s and 1950s, reaching its arms across the once-populated spectrum of college basketball postseason tournaments to become the unquestioned “main event”—to most of the public, it’s now the only event. The NCAA tournament has grown, and so has the public’s appetite for it, in large part because of the hysteria (“madness”) created by all of the upsets and unbelievable games.

This year’s March Madness felt unique. It felt like there were more upsets than before. But it wasn’t. That’s just how March Madness is supposed to feel. This year’s tournament included an 11-seed making the Final Four for just the fourth time and a #1 seed lose in the first round to a #16 seed for the first time ever since the event included 16-seeds. This much is novel. But the madness of March has been going on since college basketball postseason events began in the late 1930s. They are and always have been built on uncertainty.

Uncertainty is a key element in all sports. What makes them interesting is that, even in the face of stacked odds, fat chances, or bad matchups (a 1-seed playing a 16-seed, for instance), there is always a possibility that the underdog will win.

What makes March Madness exceptionally uncertain is the belief that any team can win any game. Win, and you move on. Lose, and you’re done. This is more cutthroat than professional basketball, baseball, and hockey with their playoff series. It’s more inclusive than college football’s four-team playoff. It’s more tribal than any individual sport. And it’s inclusivity and novelty goes well beyond what professional football is capable of displaying. March Madness, more than any other sports post-season setup, is built on uncertainty.

So is the recent scandal in college basketball. While this issue has taken a back seat now that the on-court action has usurped our attention, the FBI investigation into so many high profile basketball programs remains. And this potential scandal stems from one thing (just like in every college basketball scandal in history): the lengths people are willing to go to try to reduce the uncertainty in March in their favor. In the 1951 scandal and the 1961 scandal, players shaved points for overzealous gamblers hoping to ascertain large payouts from games at Madison Square Garden in the postseason. And every other time (Kentucky in the early-1950s and 1980s, UCLA in the 1970s and 1990s, Michigan in the 1990s, Georgia in the 2000s, Louisville in the 2010s, etc.) it has been about getting top talent onto campus. Getting the next big recruit in basketball is without question the most direct way for a coach to increase his team’s chances in all the madness of March. As we see in so many games each March, one player can make all the difference needed.

And yet for as much certainty as coaches seek, there are some things they simply cannot control. They can decide which five players are on the floor at all times. They can train those players using the best techniques possible to develop skills and implement strategies. But these are young men they’re coaching. They’re humans, not robots. They’re prone to emotions and impulses, not infallible. They’re 18 to 23, not fully mature adults. And they’re college kids, not professionals… as long as the NCAA says so. Coaches can’t dictate every decision their players make.

What drove the gamblers to pay players to shave points in the 1940s and 1950s was the ability to ascertain the uncertain. What drives coaches to take bribes and pay recruits and their families is an interest in certainty during March, when all coaching staffs make their living.

And I don’t think we’d want it any other way.