A Historian’s Advice on Living to 100

Vaughn Davis Bornet’s Ph.D. is from Stanford University (1951), the B.A. and M.A. (1939, 1940) are from Emory University, the year 1941 was at University of Georgia. Author of over a dozen books and scores of articles and essays, he has been writing articles frequently in recent years on the internet’s History News Network. He holds “Distinguished” awards from American Heart Association and Freedoms Foundation. He taught at University of Miami, 1946-48, and Southern Oregon College, 1963-80. He was a staff member of The RAND Corporation in the 1960s. A Commander in the Naval Reserves, his active duty was 1941 to 1946. His 2016 books Lovers in Wartime, 1944 to 1945 and another, Happy Travel Diaries, 1925 to 1933 (both Amazon) are recent. Coming out in early October, 2017 is, Seeking New Knowledge: A Research Historian’s Rewarding Career (Bornet Books). He lives, apparently only semi-retired, in Ashland, Oregon. 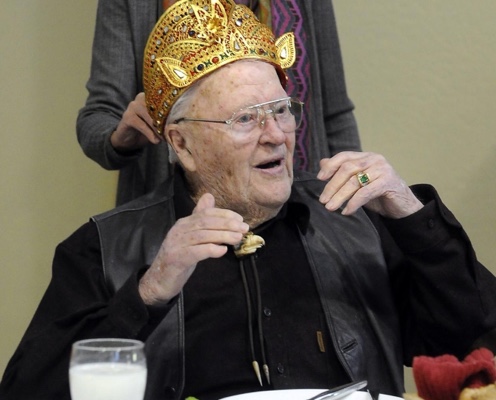 Editor’s Note: Once again, we hear from our senior citizen in Ashland, Oregon. This time he is obviously trying to reach out and lengthen at least some of our lives. Good luck on that, folks. (Remember: Dr. Bornet is Emory, Univ. of Georgia, Stanford, Navy, “free lance,” RAND, and so on. He started Life on October 10, 1917.)

My subject today is living a long life, and how to go about it. Here’s the scoop: First: Don’t smoke, or if you do, give it up! There used to be smoking in the 1960s at the tables of our Ashland Rotary Club. I got up and moved every time. I was rude, no doubt about it. I thought I “knew better” and, yes, I did!

Second, be active mentally and physically, over a very long period. I was a baseball pitcher, weightlifter, sailor, golfer, and now one of the few exercisers in our retirement home. We camped a lot in the old days, at relatively high altitudes, and I’m sure it was good for all of our family and friends who went with us (to about 5,000 feet).

Then, plan cleverly (or have the dumb luck) to marry or conspire to live with, a good partner. Don’t change the one you chose so carefully. Tell that spouse of yours to read up on “nutrition,” and use a little care when planning your meals.

I am of two minds about children’s effect on longevity. They may shorten your life by sometimes almost driving you nuts. Or, they may actually lengthen your life, as they may pay part of the bill for that fancy retirement home. They can provide a really good motive to stay alive as they visit weekly or monthly, bringing chocolates.

While I am convinced that work may have a lot to do with longevity—mostly with shortening it; I suggest that you sensitive ones avoid an autocratic boss. I had several—for long periods—and I wasted a good deal of time trying to endure them.

It also helps if you’re paid well. If you can’t arrange that, try to inherit a sizable sum from the estate of an older brother who is well fixed.

I feel obligated to suggest that the amount of “happiness” you have is bound to have a lot to do with how much you really want to “live long.” Sorry, but I am not quite sure how to guarantee development or retention of happiness, or even to know when you’ve used up your quota.

I surmise that you have read at least some of the little articles in newspapers that give advice. They are about coffee, sugar, salt, alcohol, fatty meats, and junk food. (In some states, drugs and opiodes are now among the subjects. That unsought advice is also about when to eat, and how to sleep—of all things.

I would add this unsought advice: stick with really nice people. (After some recovery from my huge heart attack in 1977, my physician, a Dr. John Reynolds in Ashland, Oregon told me: “Vaughn, starting now, stay away from people that bug you.”) Good advice, that--but it’s hard to do.

I am almost certain that music is related to longevity. Playing it; listening to it; respecting opinions about it. Personally, I would recommend opera on Saturday mornings as a way of relaxing, but it can be unnerving with all of its suicides and murders.

There are one or two practical matters related to health that are seldom mentioned. I am convinced that if dermatologists catch those spots due to excess sun, coming on your face, shoulders and hands, hitting them a second or so with a nitrogen gun, major cancer may never show up in major parts of your body.

NOW: A Harvard-based scientific discovery a little while back seems to be related to my own longevity. It’s psychology-based.

I’m going to quote from a learned book: “We now know that soaking yourself in the recent past—your past—is a powerful way to rehabilitate aging cognition.” That quote is from John Medina, a developmental molecular biologist. He wrote Brain Rules, and Brain Rules for Aging Well. Another highly relevant book is: Ellen J. Langer, Counterclockwise: Mindful Health and the Power of Possibility. Her experiments had dramatic conclusions.

I want to offer a simple quotation: “… you should become a specialist on what you did between the ages of 15 and 29.” No kidding.

I heard about this next idea recently, but it has been known to psychologists for several years and is based on solid conventional research.

The idea is this: Relive your childhood, youth, and earliest adulthood years by thinking and talking about them! It turns out that I certainly did. My years from 15 to 29 were 1932 to 1946. I have written seriously about that era in four books! In 1995, I wrote a major autobiography in the third person; it ended at 400 pages, with over three chapters treating those “magic” years. Several years ago, I wrote a book rooted in letters I exchanged with my far away wife in wartime, 1944. Rereading of our stressed but thrilling life back then, I even relived the days of marriage and honeymoon! (I married my bride in her home, snow outside, in my World War II blue Navy uniform.)

In 2017 I put together a third detailed account that took me back to 1925 to 1933. The book was rooted in parental travel diaries and brought back my Boy Scout years, memories of family, and our transition from Prosperity to Depression.

I just finished my original new book, Seeking New Knowledge: A Research Historians Rewarding Career. I actuallycompleted all the required remembering when finishing up with my 99th year. I typed the first draft of the whole book myself, by the way, wishing my fingerprints would return.

What I am saying is that I have often relived being young again, in real detail. If I am a relatively healthy 100 at this time, just MAYBE some of that longevity is due to Reliving the Past—my own Past—just as those scientists ordered! My ever-changing years from 15 to 29 were astounding, really. I’m now going to refer to them briefly, so get ready!

My parents and I were Happy in Prosperity—those Twenties were good. But the sheriff sold our nice home, vacation home, and cars in 1931; I had to live a year with my aunt without my parents; they moved to Miami Beach and I joined them finally by taking a five-port-docking coastwise steamer from Philadelphia to Miami.

Thereafter, 1933 to 1935, I helped support my family by delivering as many as 250 morning newspapers, mostly to tourists. I graduated from my second high school. Now scholarships helped me get two and half college degrees before the war. And my father’s steel engineering went solidly.

Next, I served five years with the Navy; then taught History two years at the University of Miami; attended Stanford a long time on the G I Bill, and in spring, 1951 finally got the doctorate in History.

One secret to living long, those psychologists say, is nostalgia. “Regular nostalgia exposure,” they assert, “has behavioral benefits…consistent with activation of dopamine. It boosts social connectedness scores, and feelings of well-being.”

A recent Wikipedia explanation of dopamine is: “It’s a neurotransmitter in the brain that acts to help regulate movement and emotion.” And, “It’s a chemical released by neurons…to send signals to other nerve cells….” And then, “Reward-motivated behavior increases the level of dopamine in the brain.” (That word isn’t in the Webster’s Collegiate I have used since 1936.)

Moving on, the experts also say, “Seniors consistently exposed to their past become less anxious about dying, become emotionally closer to loved ones, even obtain greater tolerance for outsiders.” Still with me?

Let me put it in simpler English: Reliving ones’ earlier years, especially the ones after childhood and before getting far into adulthood, greatly helps to prolong life in old age.

This is what I seem to have learned: To go back with real appreciation to your own selected “old days” is something of a guarantee that Heaven will grant a noticeable increase in our “new days.”

There was an article on seizing longevity in History News Network recently. The learned author claims that if one looks back at youth and earlier life, and dwells on it, (often--I gather) it helps the individual to live on—and reach a healthy old age.

As I conclude, I want to confide a little more about myself: Well, I grew up in a snooty little main-line town in Pennsylvania called Bala-Cynwyd. I was in the Lower Merion H.S. Band and Orchestra. And later on a winning tennis team at Ida M. Fisher H.S. (Miami Beach).

I became a Sigma Chi at Emory University and graduated “With Honors.” Spent a graduate year at University of Georgia. Enlisting in 1941 then commissioned, I was after two years put in charge of all the barracks at Naval Air Station in Alameda for three years and dubbed “necessary.” This lieutenant didn’t get out of uniform until four months after the War was over. In 1945 after two drinks, my admiral once said, “Hell, Bornet, nobody wants your job!” (Which is how I learned I wasn’t about to be shipped out to the far Pacific, back in early summer, 1945.)

After Stanford I began to write books and work for foundations and a Think Tank. A three year full time effort on my part was writing a big book for the Commonwealth Club of California.

I spent three separate years helping three distinguished scholars put together their famous books. The subjects were: President Roosevelt, the best-selling textbook on American history by Thomas A. Bailey, and Herman Kahn’s classic book on thermonuclear war. I also summarized a big RAND Corporation book on the Space Race, making it readable. I developed an Oral History activity for the Truman Library, getting an autographed photo from him, with thanks.

Meanwhile, I served as editor for American History, Biography and Geography for a new edition of Encyclopedia Brittanica that came out in 1960. I had three happy years at that RAND Corporation.

I was a professor and Division Chairman at Southern Oregon College about two decades. I served nearly twenty years on the United States Civil Rights Commission for Oregon. For two years, with secretarial help, I served as president of the Rogue Valley Symphony.

Finishing, I guess I should admit that I wrote a book for the American Heart Association which got me named “Distinguished” before a huge hotel audience of cardiologists. The book made the news columns of the NYT. Finally, The Freedoms Foundation of Valley Forge honored me for my article on US relations with Russia. My thousand page plus website, CLIOISTICS, is permanently on the Internet with hundreds of pages that were published during my recent oldest years.

The idea of this simple article has been to spread the news that going back to Your Post Childhood (but Early Adult) Past, thinking about it, considering it, can actually lengthen your Life! Enroute (since I have been here since October 10, 1917 and remain healthily active as an elderly Research Historian) I have ventured to offer a precis of my active life, only as an inspiration to You.