You Remember the American Victory at Cowpens, Don’t You?

Jim Stempel is the author of seven books and numerous articles on American history. His newest book, American Hannibal detailing the match between Daniel Morgan and Banastre Tarleton is due out in May, but can be pre-ordered now at Amazon. Feel free to browse his website. 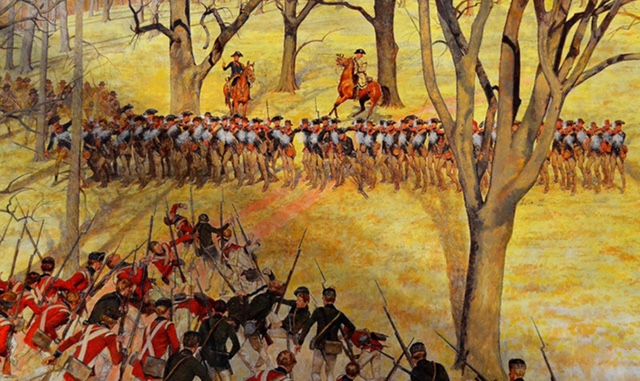 On a bone-chilling morning in January, 1781 one of the most remarkable, decisive, and significant victories in American military history took place in the backwoods of South Carolina, yet its historical importance has rarely been recognized. 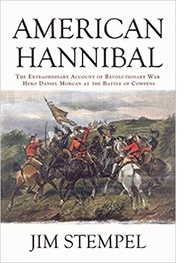 That morning British Lt. Colonel Banastre Tarleton, hand-picked by General Charles Cornwallis, was opposed by American Daniel Morgan, a rough and tumble son of the frontier. On ground known as the Cowpens, Morgan employed a psychological ploy and tactical scheme so brilliantly conceived and masterfully executed that within an hour the British found themselves overwhelmed, enveloped, and routed from the field. It was an engagement that had significant repercussions. Morgan’s stunning victory ended a two year Revolutionary impasse, rekindled hope throughout the colonies, and put Cornwallis on a reckless path that would end with his surrender at Yorktown, thus catapulting the infant United States to independence. That’s why Morgan’s victory was so important, but don’t go looking for evidence of that in most works detailing battles of the modern era. You won’t find it.

In Turning The Tide Of War; 50 Battles That Changed The Course Of Modern History by Tim Newark, Cowpens gets not a word. Nor is it mentioned by Michael Lee Lanny in The Battle 100, Jeremy’s Black’s The Seventy Great Battles of History, or Nigel Cawthorne’s History’s Greatest Battles. It is not listed in The World Atlas’s “Greatest Battles in American History.” The online site, Ranker does list Cowpens at 60 of 78 “Most Important Battles in U.S. History,” while the online site Share Rank does not include it in its listing of important American battles at all. Like Rodney Dangerfield, Cowpens get’s no respect.

Since the Battle of Monmouth in 1778, the American Revolution had been at an impasse. Things changed, however, in May, 1780 when the port of Charleston fell to British siege. That defeat left the South open to further British inroads. Frantic, Congress sent Horatio Gates, “The Hero of Saratoga,” to take command of the meager American forces that remained, but in August Gates marched his small force directly into Cornwallis’s entire army on the road to Camden, S.C. The result was disaster when the militia – two thirds of Gates’s troops – bolted at the sight of British bayonets.

Gates was soon replaced by Nathanael Greene, and Greene was joined by Daniel Morgan, recently recovered from a nagging illness. Morgan had a well deserved reputation as a fierce and cagy fighter, and, utilizing Morgan’s talents, Greene decided upon a bold plan. He would divide his command, even in the face of Cornwallis’s larger force, sending Morgan with a small but veteran force west to the Pacolet River in South Carolina. The idea was to harry Cornwallis, but the British general, being reinforced, soon decided to strike at Morgan. For this he utilized his favorite subordinate, Lt. Col. Banastre Tarleton. Tarleton was a tough and relentless cavalry officer, but his reputation had come at the expense of butchery, a fact that had made him “in time and with reason, the most hated man in the South.”

In early January, 1781 Tarleton, leading a column of about 1,100 of Cornwallis’s finest troops, splashed across the Enoree River in pursuit of Morgan. Detecting the movement, Morgan started his force north, toward the state line, drawing Tarleton ever deeper into foraged-out country, while hunting for good ground to offer battle. This he found at a local landmark known as the Cowpens, where locals had for years gathered their herds for branding. By then Morgan’s force had swelled with the arrival of local militia, but he now faced the same problem that had defeated Gates at Camden – the use of untested militia on the field of battle.

Morgan responded with a tactical deployment so novel, yet simple, that it took advantage of his militia’s best qualities, while shielding them from British bayonets. He would deploy his troops in three lines, the first a skirmish line, the second a strong line of militia partially obscured by a swale, and a third line of Continentals and veteran Virginians. He asked the skirmishers to fire two or three shots then retire to the militia line behind them. Likewise, the militia was asked to do the same then withdraw to the line of Continentals, where the entire force would make a final stand, the militia now shielded by the Continentals’ bayonets.

At dawn, January 17, Tarleton marched his troops onto the Cowpens, and deployed for assault. Foolishly failing to reconnoiter the American position, he immediately launched an attack into the teeth of Morgan’s trap. Both the skirmish and militia lines savaged the British assault, before falling back to the line of Continentals, where both sides fought furiously. Tarleton then attempted a flanking movement which was spotted, but a misunderstood order had the entire American line withdrawing in error. Morgan galloped off and selected another line while the British, mistakenly thinking the Americans beaten and in retreat, began a wild pursuit. At the last moment the American line halted, turned, and unleashed a murderous volley into the faces of the pursuing Redcoats. Then John Eager Howard, in command of the infantry, shouted “Charge bayonets!” and the Continentals surged out and over the stunned British. The militia joined on the Continentals’ flanks, American cavalry quickly circled the British fugitives, and in short order the Redcoats were enveloped, surrounded, and utterly defeated.

Hardly a British infantryman who stepped off that morning avoided death, capture, or wounding. Infuriated, Cornwallis vowed to regain his captured infantry, and began a reckless pursuit of the hard-marching Morgan, which would ultimately lead the British through North Carolina and to defeat at Yorktown. How critical was Cowpens to American independence? We will leave the final word on that to Sir Henry Clinton, who later wrote that Morgan’s victory was “the first link of a chain of events that followed each other in regular succession until they at last ended in the total loss of America.”

It is time, I think, that Morgan and his amazing victory get the recognition they deserve.