Edwin Moise is a professor of history at Clemson University. He earned a Ph.D. in Chinese and Southeast Asian history from the University of Michigan in 1977, but more recently he has specialized in the history of the Vietnam War. He is the author of The Myths of Tet: The Most Misunderstood Event of the Vietnam War (University Press of Kansas, 2017). 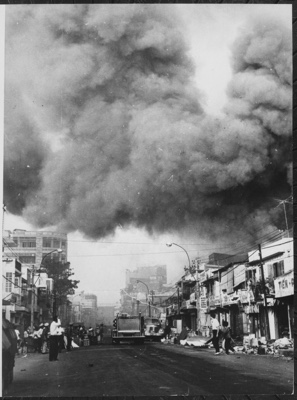 In January 1968, American commanders in Vietnam were aware that their enemies were planning a major offensive, but the Americans for the most part did not understand what sort of offensive was coming, or how widely it would be spread. A wave of attacks throughout South Vietnam caught the Americans and the forces of the Republic of Vietnam (RVN) partially by surprise on January 30 and 31, 1968. 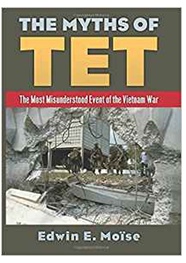 The Tet Offensive was a very influential event, but it has been widely misunderstood, and some of the myths about it are still widespread even today. The conventional wisdom about the offensive, that it was a military victory for the American forces but a political defeat, because it undermined support for the Vietnam War in the United States, is basically correct. But both halves of this are often wildly exaggerated. The Tet Offensive was not nearly as devastating a military defeat for the Communists, nor as devastating a political defeat for the US government, as has often been asserted.

In the months leading up to the Tet Offensive, intelligence officers at Military Assistance Command, Vietnam (MACV), had been issuing estimates showing relatively low Communist strength in South Vietnam. They said that the Communist forces were weakening and that the United States was winning the war. The relatively weak forces portrayed in the MACV estimates would not have been capable of conducting heavy combat for an extended period.

After the shock of the Tet Offensive, senior officers, especially General William Westmoreland (commander of MACV) and Brigadier General Phillip Davidson (Westmoreland’s chief of intelligence), tried to come up with an interpretation of the offensive that was compatible with the pre-Tet estimates. They argued that it had been an act of desperation, and that the Communists had been unable to sustain heavy combat very long. General Westmoreland claimed that “almost everywhere except on the outskirts of Saigon and in Hue the fighting was over in two or three days.” Few later authors went that far, but most were persuaded that the heavy fighting lasted no more than about a month. The reality was that the abnormally heavy combat that had begun at the end of January 1968 continued absolutely without interruption for twenty-one weeks, going into late June.

Even while claiming that the heavy fighting had been relatively brief, the mythmakers claimed it had been absolutely calamitous for the Communist forces. Westmoreland said the Viet Cong were “virtually destroyed as an effective force” in the offensive. Davidson said, “In truth, the Tet Offensive for all practical purposes destroyed the Viet Cong.” “The Viet Cong guerrillas and the VC political infrastructure, the insurgency operators, were virtually destroyed in the Tet offensive.”

Many later authors have been persuaded that the Viet Cong were not a major factor on the war after the Tet Offensive, and had to be replaced by North Vietnamese troops. Again this was false. The Viet Cong units that led the attacks, on January 30 and 31, suffered terrible casualties. But most of the Viet Cong military forces survived. The Viet Cong were still important participants in the war even after the combat actually did subside, for a while, in late June of 1968. They still carried almost the whole load in the very important Mekong Delta; North Vietnamese troops did not begin to play a major role there until 1969.

There were places where cadres of the political and administrative organizations that Americans called the “Infrastructure” came out in the open, attempting to lead the “general uprising” against the Saigon government, and suffered grievously as a result. But claims that the Infrastructure as a whole was crippled are wildly exaggerated. When the Phoenix Program began to inflict serious losses on the Infrastructure in late 1968 and 1969, this was not a sham; it was not attacking a target that had already ceased to exist.

The exaggerated claims about the impact of the Tet Offensive on the Communists should have posed a logical problem: if the Tet Offensive had been such a massive disaster for the Communist forces as was being claimed, the United States and the Republic of Vietnam should have gone on to win the war. The explanation that has been proposed for this paradox is that the Tet Offensive was such a shock to the American public, and the US government, that the United States lost its will to fight, and did not attempt to follow up its advantage. General Westmoreland wrote, “President Johnson and his civilian advisers . . . ignored the maxim that when the enemy is hurting, you don’t diminish the pressure, you increase it.” Of all the myths of the Tet Offensive, this has been the most enduring. Many Americans still believe that Tet was a brief spasm of violence, and that it utterly devastated the Viet Cong, but this is mostly because they have read these ideas in works written years ago. The myth that has appeared far more often in works published very recently is that the Tet Offensive was such a shock to the United States that it caused the US government to abandon the pursuit of victory in the war. Mark Bowden’s best-selling book Hue 1968 is typical of many. Bowden writes that the battle for the old imperial capital of Hue, which lasted until late February 1968, was “a turning point not just in that conflict, but in American history. When it was over, debate concerning the war in the United States was never again about winning, only about how to leave.”

The debate that actually occurred inside the US government, in the days immediately following the end of serious fighting in Hue, was not about how, when, or whether to pull out of South Vietnam but about how many more troops to send, beyond those already there. The Joint Chiefs of Staff were urging President Lyndon Johnson to send large reinforcements. Clark Clifford, who had just taken office as secretary of defense, was indeed looking for a way out of Vietnam; the Tet Offensive had been a terrible shock to Clifford. He and a group of his subordinates opposed the military’s request for a large expansion of the American force. But they did not dare suggest that no reinforcements be sent; they argued only that the number of additional troops to be sent to Vietnam be kept relatively small. They knew that President Johnson was still determined to prevail in the war, and that if they proposed an abandonment of that goal, the President would reject their proposal and probably accept the military’s plan for massive reinforcement.

President Johnson decided on a modest expansion of the American military effort in Vietnam—tens of thousands, not hundreds of thousands, of additional troops. But he could see a growing hostility to the war in the United States, especially in his own party. He wanted to appear to be making every possible effort to end the war, even as he pursued victory. So in his famous speech on March 31, 1968, in which he announced that he would not run for another term as president, he said that in an effort to ease the way for a negotiated settlement of the war, he was “reducing—substantially reducing—the present level of hostilities.” This was, however, false. He wanted any peace negotiations to produce a settlement under which Hanoi abandoned its war aims and abandoned the Viet Cong, allowing the Republic of Vietnam to impose its full control on South Vietnam. He was increasing the level of hostilities, not reducing it, in an effort to bludgeon his enemies into accepting such a settlement.

Johnson continued to strengthen the American forces on the ground in South Vietnam. At the end of January, as the Tet Offensive was beginning, there had been 498,000 American military personnel in South Vietnam. At the time of Johnson’s speech at the end of March, there were 515,000. There would be 537,000 by July. And Johnson was telling them, right to the end of his term as president, to put as much pressure as possible on the enemy. “Follow the enemy in relentless pursuit. Don’t give them a minute’s rest. Keep pouring it on. Let the enemy feel the weight of everything you’ve got.” Of the twelve bloodiest months of the American war, those in which the numbers of Americans killed in combat were the largest, eight came after Johnson’s speech.

Johnson intensified the American bombing campaign. The most the United States had ever dropped on Indochina in a single month before the Tet Offensive had been 83,000 tons of bombs. Responding to the Tet Offensive, Johnson had increased this to 97,000 tons for March, the month leading up to his speech. It would be more than 110,000 tons in every month from April through August.

The Congress, the press, and the public were deeply divided over the war. But the executive branch of the US government continued pursuing victory in Vietnam through 1968 and well into 1969. What broke the will of the United States, leading President Richard Nixon to announce on June 8, 1969, that he would begin withdrawing American forces from Vietnam, was not a brief spasm of violence at the beginning of 1968, but well over a year of mostly heavy combat. The number of Americans killed in action in Vietnam had been above 1,000 in only a single month before 1968. It was above 1,000 in twelve of the eighteen months from January 1968 to June 1969. The first significant reductions in the number of American military personnel in Vietnam, and in the total monthly bomb tonnage, were in August 1969.