Both Sides Have Been Getting the Gun Debate Wrong

Roxanne Dunbar-Ortiz grew up in rural Oklahoma, the daughter of a tenant farmer and part-Indian mother. She has been active in the international Indigenous movement for more than four decades and is known for her lifelong commitment to national and international social justice issues. After receiving her PhD in history at the University of California at Los Angeles, she taught in the newly established Native American Studies Program at California State University, Hayward, and helped found the Departments of Ethnic Studies and Women’s Studies. Her 1977 book The Great Sioux Nation was the fundamental document at the first international conference on Indigenous peoples of the Americas, held at the United Nations’ headquarters in Geneva. Her latest book in paperback is Loaded: A Disarming History of the Second Amendment. 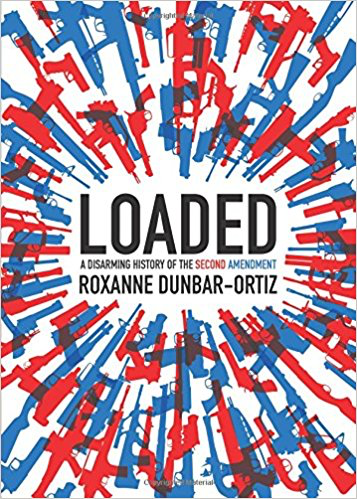 We have a gun culture not because of the sanctity of the 2nd Amendment, but because killing, looting, burning, raping, and terrorizing Indians were an American tradition and militias helped carry out these horrors.

In 1970, the then-celebrated U.S. historian Richard Hofstadter coined the term gun culture. “Many otherwise intelligent Americans cling with pathetic stubbornness to the notion that the people’s right to bear arms is the greatest protection of their individual rights and a firm safeguard of democracy—without being in the slightest perturbed by the fact that no other democracy in the world observes any such ‘right’ and that in some democracies in which citizens’ rights are rather better protected than in ours, such as England and the Scandinavian countries, our arms control policies would be considered laughable.”

Hofstadter narrates the historical roots that might explain the violence wrought by civilian gun use, but argues that other European countries were surely as violent. In one brief paragraph, he dismisses the Second Amendment as having any validity in constitutional law: “By its inclusion in the Bill of Rights, the right to bear arms thus gained permanent sanction in the nation, but it came to be regarded as an item on the basic list of guarantees of individual liberties. Plainly it was not meant as such. The right to bear arms was a collective, not an individual, right, closely linked to the civic need for ‘a well-regulated Militia.’ It was, in effect, a promise that Congress would not be able to bar the states from doing whatever was necessary to maintain well-regulated militias.”

Did Hofstadter believe that these astute expansionist, slave-owning “founding fathers” mistakenly threw in the Second Amendment to a Bill of Rights that was about individual rights? Hofstadter does note, without discussion, that the first draft of the Virginia Constitution of 1776—Thomas Jefferson’s work, which preceded the writing of the U.S. Constitution by nine years—included the individual right to bear arms, stating: “No freeman shall ever be debarred the use of arms.” Did Jefferson make a mistake in Virginia, and then contribute to another mistake, making the right to bear arms an individual right in the U.S. Constitution? Hofstadter attributes these “flaws” in Jefferson and the other founders to “reverting to one of the genial fictions . . . the ancient Saxon militia.”

Killing, looting, burning, raping, and terrorizing Indians were traditions in each of the colonies long before the Constitutional Convention. “Militias,” as in government-controlled units, were institutionalized by Article I, Section 8, Clause 15 of the U.S. Constitution, and were used to officially invade and occupy Native land. But the Second Amendment (like the other ten amendments) enshrined an individual right. The Second Amendment’s language specifically gave individuals and families the right to form volunteer militias to attack Indians and take their land. Later, as racial slavery was institutionalized in the late 17th century, slave patrols were drawn from these militias. Both expansion into Ohio Valley Indian territory and maintenance of chattel slavery were primary objectives of secession from Britain.

But, Hofstadter’s argument is important, not just because he was an influential liberal historian of the United States who penned the classic 1964 essay, “The Paranoid Style in American Politics,” but because his arguments about guns in 1970 have been used and repeated, like a mantra, ever since. Then, as now, gun-rights advocates and gun-control advocates have little basis for communicating.

The great divide reflects, rather remarkably, the persistence of pro-gun narratives that have morphed as times changed over two centuries, from westward expansion, industrialization, and urbanization, to the advent of movies, television, and the Internet. Gun ownership appears irrational if not insane to gun-control advocates, while gun lovers rely on the Second Amendment, because they have no other argument and don’t wish to admit, perhaps even to themselves, what the Second Amendment signifies. Neither party seems to have any idea what the Second Amendment was originally about and why its sanctity has persisted.