William Kashatus is a historian and author. Email him at bill@historylive.net 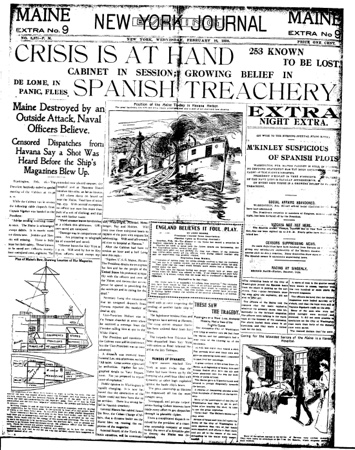 When President Donald Trump tweeted his “Fake News” awards in January, the big “winner” was CNN for inaccurate reporting of the special investigation into the Trump campaign’s ties to Russia. Also making the cut were the New York Times, Washington Post, Newsweek and Time. Conspicuously absent was Fox News, which spread Trump's false claims and conspiracy theories, including his "birther" crusade against former President Barack Obama.

“Fake news” did not begin with Trump’s election to the presidency, though. Nor did it originate with the modern 24-hour news cycle and social media which encourage half-truths or outright falsehoods in order to stay up-to-date with the most recent current events. In fact, many historians trace the origins of fake news to the beginnings of the Spanish-American War. That attribution makes this month the 120th anniversary of fraudulent news coverage.

At the turn of the 20th century, fake news was called “yellow journalism,” or sensationalizing the news with eye-catching headlines, inflammatory cartoons and exaggerated accounts in order to sell more newspapers. No newspaper did this better than Joseph Pulitzer's New York World and William Randolph Hearst's New York Journal.

Locked in a circulation battle, both papers embellished stories and sometimes made them up all together. The competition to outdo each other began when Hearst and Pulitzer saw an opportunity to sell more papers by focusing on the rising tensions between Spain and one of her Latin American colonies, Cuba.

As the struggle for Cuban independence intensified, Spain took brutally repressive measures to halt it. To protect U.S. citizens and property after anti-Spanish rioting in Havana, President William McKinley ordered the battleship USS Maine to Cuba.

Meanwhile, Hearst hired artist Frederic Remington to capture images of the war that was supposedly about to start. But when Remington arrived in Cuba he found that tensions had subsided and telegraphed Hearst to tell him there would be no war. The artist was flabbergasted when the newspaper magnate replied: “You furnish the pictures and I’ll furnish the war.”

After the Maine exploded in Havana harbor on February 15, 1898, both papers began publishing sensationalist accounts. Despite the fact that the cause of the explosion was unknown, the World ran a story about the ship being blown up by a Spanish torpedo along with a picture of a violent explosion.

Not to be outdone, the Journal ran a similar story, claiming it would give a $50,000 reward to anyone with information on the attack. (A 1976 naval investigation determined that the ship exploded due to a fire that ignited its ammunition stocks.)

With an estimated 260 of the Maine’s 400 sailors being killed in the explosion, it’s not surprising that the sensationalized accounts published by the World and the Journal resulted in the demand for swift action by Congress and the American public and Hearst got his war.

Today, historians identify the Spanish-American War as the first press-driven war because Hearst and Pulitzer created an environment in which the print media exercised tremendous power and sway over national affairs.

Without sensational headlines and stories, the American demand for Cuban intervention would not have occurred. Instead, the United States, which won the nine-month-long war, emerged as a world power, and “fake news” proved to be the major factor.