Marching for Justice: 100 Years of the Women’s Suffrage Movement 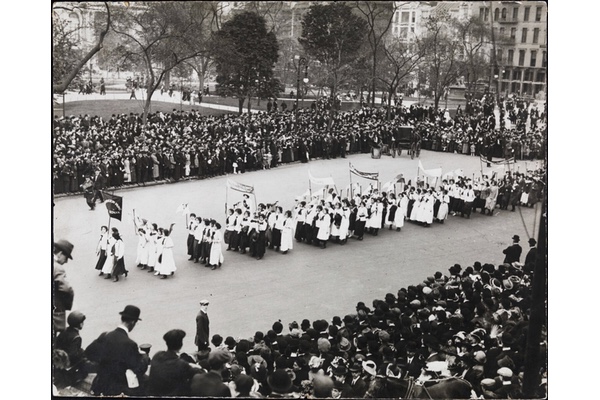 The #MeToo movement is just the latest chapter in the very long story of the crusade for women’s rights in America. Yet many young people today, men and women, do not understand how much work was involved, or how complicated the struggle, for women, over a hundred years, to first get the vote and then battle for the same political rights as men.

That story is brought to life, vividly, in Beyond Suffrage: A Century of New York Women in Politics at the Museum of the City of New York at Fifth Avenue and E. 103rd St, New York, that recently opened. It is the tale of the women’s movement from 1848 until 1917, when women first won the right to vote in New York State, to 1920 and the national vote to today. It is full of heroines, from Elizabeth Cady Stanton to Gloria Steinem to the women in the headlines today, such as those on the U.S. Gymnastics team.

The best thing about the engaging, colorful and dramatic exhibit is that while about voting, it is not political. It is a history tale and not a political science lesson. Oh sure, there are heated political stories in it, such as Hillary Clinton’s Presidential run, the campaigns of Geraldine Ferraro, Shirley Chisholm and Liz Holtzman, but the exhibit does not champion those women as much as explain their lives and their crusades.

The exhibit presents the suffragettes, and the women who followed those pioneers, to the public not just as women, but as Americans.

It is not your standard political history exhibit, either. It hangs its case on unusual and intriguing hooks. As I walked through the exhibit on a chilly winter day, I found myself part of a large and loud group of New York City teachers, led by a docent. She told an intriguing story. From 1900 on, women feared that their entrance into the political world would be seen as unsuitable because the political world and many of its men was considered sleazy by the public. How could prim and proper women want to be involved in all of those smoke-filled rooms and friendships with cigar-smoking city bosses? The answer? Dress all in white!

“White is the color of complete innocence and women wore that color whether hammering in nails to hold political posters or just riding bikes in America’s parks. It worked,” said the docent, standing in front of a female mannequin bike rider dressed all in white in 1900.

Around her were dozens of large photos of women in white in in different political settings. There are several, huge and wonderful photos of women all in white in big city suffragette street marches from 1900 to 1920, marching down New York streets in front of cheering crowds of thousands of onlookers. There is a terrific photo of nurses, again all in white, in a protest march.

The exhibit on the third floor of the museum that overlooks Central Park is flooded with historic photos of the women’s movement, some ten feet high. There are numerous videos with headsets that help to tell the story of the suffragette movement.

The exhibit is full of those wondrous slogans we have heard for a century: “I did not run as a woman…but as a citizen” - Congresswoman Ruth Pratt 1918. “The door might not be open for a long time…so walk in and sit down on the chair” – Frances Perkins, 1930. ” We don’t want a piece of the pie; we’re baking a new pie” – Gloria Steinem, 1970s “We are turning in our lipstick for a bigger stick” – Congresswoman Bella Abzug, 1975. There are posters that say: “Make Policy, not Coffee”

My favorite was “a woman’s place is in the house, the House of Representatives,” by Bella Abzug. 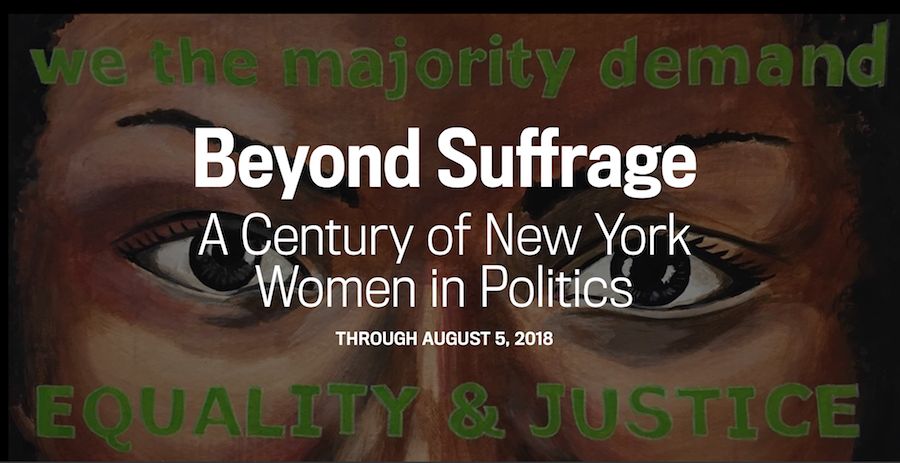 The exhibit’s curator does not sugar coat anything. She notes that despite all the hard work and hoopla, most of the women who ran for office in the 1920s and ‘30s lost their races, some badly. She notes that some women, like men, were indicted and jailed on corruption charges. The exhibit mentions fiery issues, such as abortion, but does not put any major focus on them. There is one of Hillary Clinton’s famous pantsuits, but there is no pro-Hillary slant to her part of the exhibit.

The exhibit does a fine job of highlighting the political work of black and Hispanic and Asian women as well as Caucasian and it is noted that women’s rights leader Mabel Lee advocated hard for the right to vote even though she herself never could vote because she came to America under the no-vote terms of the Chinese Exclusion Act of 1882.

The exhibit is all-inclusive. There are photos of African American women’s’ marches and white women’s marches. Short biographies of women of many color and ethnic backgrounds can be found on the walls.

Importantly, the exhibit notes that it was the nonstop work of the League of Women Voters, over so many decades, that really brought women to power and make them a valuable part of the male dominated political machine.

The exhibit shows, too, that many male political leaders put dozens of women into key jobs in their administrations, and early on, too, such as New York Mayor Fiorello LaGuardia, who hired 40 women for top posts when he was in office in the 1930s.

There are true stories I never heard before, that most people have never heard, such as the tale of the Maxwell Company, in New York, that made the fabled ‘Rosie the Riveter’ workplace jumpsuits in World War II and the story of Veronica Jones, the first women doctor in Mississippi, licensed in 1912

“New York has always been at the epicenter of the fight for women’s rights, from the fight for woman suffrage in the early 20th century right through today’s activism,” said Whitney Donhauser, the Ronay Menschel Director of the Museum. ‘(The Exhibit) brings that story to life to life and (connects it) to the present.”

It is broken down into four parts: 1) Securing the vote traces that story of the fight for equality from the last days of the 20th century to victory in New York in 1917 and in the nation in 1920. It introduces the idea of the “civic household” and the story of immigrant women. 2) Navigating the System explains how women, through hard work, helped to shape policy in a male dominated political world. A large number of women, trained in New York universities, went to work for public institutions and in government.

In part 3, Liberation from the Top Down and Bottom Up, women are shown in the “second wave feminism” of the 1960s and ‘70s organizing the women’s liberation movement and starting the National Organization for Women. Women left the house and went into both the political world and the workplace (there is a terrific New York magazine cover of an all-female line of college graduates walking in front of busts of male leaders).

In part 4, Breaking the Glass Ceiling, it is noted that although thousands of women have served in office, the Mayor’s office in New York and in most cities, the governor’s office in New York (and in most states) and the Presidency have eluded them. In the U.S. Senate today there are 22 women, a record, but that is just 22% of the total number of Senators. There are 84 women in the House of Representatives, just 19% of the total. It is noted, too, that in 1992 Anita Hill kicked off a new wave of feminism with her charge of sexual harassment against Supreme Court Justice Clarence Thomas, but it is sadly not noted that women still earn just 85% of the money men earn for doing the same job.

The exhibit is both uplifting and sad. It is uplifting in that it highlights the hard working and ambition of many women to get women where they are in this country and sad in that this crusade was needed in the first place.

The exhibit runs through August 5.