This Confederate Statue Was Art 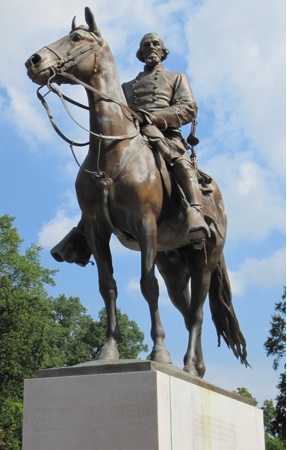 Should there have been an outcry over the decision in Memphis to pull it down?

The Tennessee Legislature convenes this week and the hot ticket is the debate over Memphis’s obvious defiance of the Tennessee Heritage Protection Act and status of the Nathan B. Forrest statue.

Mayor Jim Strickland and the city council snubbed the 2013 law, which makes it illegal to remove historical monuments or to rename public parks without majority approval of the Tennessee Historical Commission. The Memphis City Council passed a law this past September that lets them sell city parks for less than market value to nonprofit organizations.

A month later Shelby County Commissioner Van D. Turner, Jr. created the private nonprofit Memphis Greenspace, Inc. to whom the city council voted to sell the Health Sciences and Fourth Bluff parks to on December 20. The properties, which are valued at more than $2 million each, were purchased by Turner for the total sum of $2,000.

At 9:01 that night– giving a nod to activists or area code, police officers were summoned and cranes removed the monuments of Confederate President Jefferson Davis and Nathan B. Forrest amid news crews and fanfare. Commissioner Turner has said they are working with the descendants of Forrest in regards to Nathan B. Forrest and his wife’s remains, which are also buried at the park where his statue stood.

The most troubling matter in the wake of the removal was the lack of comment or outrage from Tennessee public historians setting the dangerous precedent of throwing all public monuments to the fate of current political whims. Some even praised the actions for reasons as maudlin as the activists on both sides of the issue – showing little or no professional objectivity for what appears to be a surreptitious end run around a state law they’re charged to uphold.

Since time immemorial, a region, state, or nation’s sophistication is judged by the preservation and protection of monuments and structures of its past. Every great land has them. They’re preserved for artistic reasons, cultural ones, or even in spite, as a reminder of a time that was.

Memphis’s N.B. Forrest monument is no different. It was created by Charles Niehaus – one of the most preeminent sculptors in U.S. history. It’s marble base quarried from the Ross Marble Company of Knoxville – also a recognized national historic site in the city’s Ijams Nature Center. The likeness is a certified work of fine art regarded as one of the three best equestrian statues in the United States.

Niehaus was paid $25,000 in 1901 to create it – the equivalent of $676,000 in today’s money and all of it raised from private donations. He set up camp in Memphis and poured over illustrations, paintings, and photographs of Nathan Bedford Forrest. He talked to those who knew him and even retrieved the measurements Forrest’s personal tailor kept on file so Niehaus could create a historically accurate representation of the uniform he wore in battle. The artist spent months finding the proper horse to use, made a cast of Forrest’s original sword, saddle accoutrements, and finally located a Prussian cavalry officer to act as his model and provide the proper bearing of a cavalryman on horseback. He sculpted it in his New York City studio over a three-year period and then sent it to Paris, France for bronze casting at what historians call “the well-known foundry of E. Guret June.”

It was actually the foundry of E. Gruet, Jeune. Rather well known in 1904, but a legend today for the bronze work the family did for European sculptors of the era, including Auguste Rodin. Company founder Charles Gruet had two sons and, by 1903, it had finally passed to the younger one Edmond, who used the word “Jeune” on his signature to denote the fact.

Charles Niehaus delivered an original top-shelf sculpture to the City of Memphis. 30,000 people turned out for its unveiling and millions have seen it since. Niehaus, who died in 1935, went on to create other famous works. He has more sculptures in National Statuary Hall than any other artist and his work adorns U.S. monuments across the nation. His smallest creations, when available, sell at auction for $4,000 -15,000. A one and a half times life-sized statue of a man regarded as one of the most noted cavalry generals in military history is priceless.

Regardless of someone’s stance on the contributions of the man the statue represents, it’s a genuine state treasure that belongs to the people of Tennessee. Its care entrusted to Memphis, which sold it to a County Commissioner for $1,000 – seemingly pulling off the biggest art theft in U.S. political history.