Review of "Nullification and Secession in Modern Constitutional Thought," edited by Sanford Levinson

Daniel Lazare is the author of The Frozen Republic: How the Constitution is Paralyzing Democracy and other books. He writes regularly for Jacobin and Consortium News. 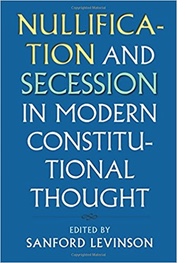 Nullification and secession were two of antebellum America’s hottest issues. The first, the theory that states can unilaterally disregard any federal law they deem unconstitutional, supposedly gave up the ghost in 1833 when Andrew Jackson forced South Carolina to back down when it tried to block imposition of a national tariff. The second, the notion that individual states are free to go their own way whenever they please, “was decided quite decisively, by the case of Grant v. Lee, argued at Appomattox Courthouse in 1865,” to quote the historian Paul Finkelman. The executive branch quashed one version of states’ rights, while the Union Army wiped out the other.

But reports of their demise are exaggerated as Nullification and Secession in Modern Constitutional Thought, a collection of essays edited by the eminent constitutional scholar Sanford Levinson, makes clear. After a century of desuetude, nullification made a dramatic comeback in the 1950s when four southern state legislatures declared the Supreme Court’s epic Brown v. Board of Education school-desegregation ruling to be “null and void.” Although neo-secessionism’s moment has been slower in coming, it has enjoyed a revival at least since 2010 when then-Texas Gov. Rick Perry declared, “We’ve got a great union” and “there’s absolutely no reason to dissolve it,” but then warned darkly: “If Washington continues to thumb their nose at the American people, you know, who knows what might come out of that.”

Two years later, 125,000 Texans signed a petition urging the federal government to “peacefully grant the State of Texas to withdraw from the United States of American and create its own NEW government,” while a GOP caucus in Wisconsin formally declared in 2014 that the Badger State has a right to secede as well. Similar stirrings have been reported in California, Vermont, and, as Ran Hirschl of the University of Toronto points out, the Pacific Northwest where there is talk of creating a new nation of “Cascadia” out of Washington, Oregon, British Columbia, and the Yukon plus portions of California, Idaho, and Montana.

What’s it all mean? Nullification and Secession is a survey of what happens when “constitutional dinosaurs” spring back to life. In one essay, legal scholars James H. Read and Neal Allen note that the Utah legislature passed two nullification laws in 2010, one allowing the state to seize federal land and the other declaring that weapons “manufactured in the state for use within the state” were exempt from federal gun laws. The North Dakota legislature followed suit in 2011 by declaring Obamacare to be “null in this state,” while, in 2013, Kansas Gov. Sam Brownback signed a law proclaiming that federal gun laws were also “null, void, and unenforceable” when it came to guns manufactured in Kansas for use inside Kansas state lines.

And in case anyone thinks that nullification is only for the gun-toting right, Ernest A. Young of Duke Law School points out that the doctrine is a mainstay of the marijuana-legalization movement, which holds that federal laws also should not apply in states opting for drug reform. Liberals and conservatives are both turning the clock back to 1798 when Jefferson and Madison argued that the states could decide constitutional questions as much as any court.

Of the dozen essays that make up this important volume, two in particular stand out. One is Mark A. Graber’s “Almost Legal,” an examination of how public officials use foot-dragging and other techniques to effectively nullify constitutional restrictions they don’t like. As he puts it:

The same goes for police officers, Graber adds, when they fiddle with evidence in a way that is illegal yet difficult to catch. But this begs the question of whether such behavior is truly unconstitutional or whether it reflects an implicit constitution, unwritten but broadly acknowledged, which holds that officials shouldn’t look too closely when cops do what is necessary to get the job done.

Finally, there is Jared A. Goldstein’s “To Kill and Die for the Constitution,” an exploration of how the Constitution has become a rallying point for far-right militias. As Goldstein, a professor at Roger Williams University in Rhode Island, notes, such groups believe that tyrannical forces in Washington have subverted the Constitution and turned it upside down and that it is the duty of good patriots to put it right. Thus, Stewart Rhodes, leader of an ultra-right group known as the Oath Keepers, defends cattle rancher Cliven Bundy for refusing to pay more than $1 million in federal grazing fees as a “principled constitutionalist who refuses to recognize the illegitimate sovereignty of the United States.”

“What did we to the Redcoats on April 19, 1775?” Rhodes asked on another occasion. “Did we petition them? Did we invite them to respect our rights? Did we file a court case? What did we do that day? We shot the hell out of them.” It’s a plain-as-day warning that federal officials can expect rough treatment if they don’t mend their ways.

Where most people assume that the purpose of the Constitution is to provide orderly government, a growing minority argues that it is actually a rationale for rebellion. One might think that Americans should resolve such arguments once and for all. But because the Constitution does not provide the tools to do so, they are condemned to fight them again and again.