Dr. Leon Anijar, 29, is currently completing his anesthesiology residency at the University of Florida in Gainesville, FL. He holds a B.S. in Neuroscience and Behavioral Biology from Emory University and an M.D. from the University of South Florida College of Medicine. 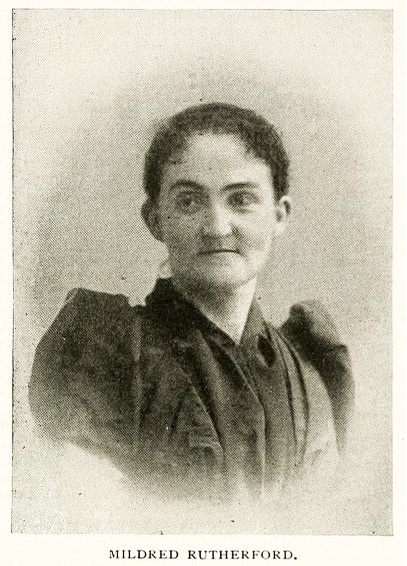 History, news, and the accepted story of what happened and how it happened would all seem to be matters of fact. No one questions that the Titanic sank in 1912 or that “In da Club” was a 2003 billboard number one hit. The matter however becomes increasingly muddled when considering the narrative constructed around the historical record. Was the secession of the Southern states a noble struggle to preserve southern culture or a seditious attempt to enshrine slavery into the cornerstone of American life? How history is written and how it is discussed matter just as much as the dates, times, and key figures of the stories being discussed. One woman, Mildred Lewis Rutherford, sought to grab history by the horns and reconstruct the narrative of her chapter in history: Southern secession and the Confederacy.

Ask most high school children “why did the South secede?” and the expected answer would be “because of slavery.” However, there is growing evidence that the triggering role slavery played in the Civil War is being increasingly questioned. A recent Washington Post poll found that just over half of Americans believe that slavery was the main cause of the Civil War and even fewer feel that children should be taught that slavery was the main cause of the Civil War in school. This is in stark contrast to the consensus opinion among American historians, who overwhelming cite slavery as the central cause for Southern rebellion. Opinions on this issue differ by region, race, and political association; one would expect that a larger percentage of Republicans, Whites, and Southerners would hold this opinion than the general population. Surely, you would think that this pernicious idea has not taken hold in the minds of traditionally progressive or marginalized groups. But it is striking that in this poll an astonishing one-quarter of Democrats, African Americans, and northeasterners thought slavery should not be taught to students as the primary cause for the Civil War. What do they think was the cause of the war? States rights.

This myth has many fathers – and at least one mother. Her name was Mildred Lewis Rutherford, the historian of the United Daughters of the Confederacy (UDC). Ms. Rutherford a southern belle born in 1851 in Athens, Georgia, was the daughter of a mathematics professor and the granddaughter of a major Georgia slave owner. Unlike many women of her day, she was well read and well known as an accomplished orator. She was a schoolteacher who lived through the aftermath of Reconstruction and advocated for propriety and Southern pride. She abhorred the description of the Confederacy in textbooks as “rebels” and “backwards” and made it her mission to rewrite history. To that end she joined the UDC in 1894 and transformed the position of historian general from scrapbook record keeper to historical spin-doctor.

The UDC’s chief cause was to commemorate confederate soldiers through the erection of monuments; Ms. Rutherford however, took especial pride in her job and used her position not only to commemorate the Confederacy but also to rewrite the narrative that had gained ascendancy in the North. Chief among her objections to the story told about the South was the perception that slavery was bad and that it played a significant role in the Civil War. She held this opinion despite the proclamations of prominent confederate leaders. Confederate Vice President, Alexander H. Stephens famously asserted: “Our new government is founded upon… the great truth that the negro is not equal to the white man; that slavery, subordination to the superior race, is his natural and normal condition. “

Facts be damned. Ms. Rutherford pushed her agenda forward and diligently worked to remove the specter of racism from the historical discussion of Southern secession. She worked hard to minimize the racism of slave owners and the brutality of the plantation system

She held up Confederate soldiers as heroes and their supporters as noble constituents in a just fight against Northern aggression. Her writings, Ms. Rutherford’s Historical Notes and A Measuring Rod to Test Text Books and Reference Books in Schools, Colleges, and Libraries, were used by school administrators to develop lesson plans and curricula on the history of the Confederacy, and were the cornerstone of a monumental drive to soften the savagery of slavery. “Secession was not rebellion” and “slaves were not ill treated” are some of the “facts” included in Ms. Rutherford’s books. These carefully constructed Orwellian guidelines formed much of the philosophical foundation for the “States’ Rights” movement and “Lost Cause” narrative that was taken up by the KKK during its rise to prominence in the late 19th and early 20th centuries. The extent of her influence can be seen in the ways the Confederate flag to this day is, in some quarters, regarded as a symbol of Southern pride, though of course she was hardly alone in lionizing the South’s rebellion.

Many of the Confederate statues erected by the UDC have become focal points of fierce debate regarding race, slavery, and our collective view of the Confederacy; some have been destroyed in protest and others removed. However, Rutherford’s work helped erect ideological monuments to the Confederacy that are far more difficult to destroy than a statue. A measure of the success of Rutherford’s re-education campaign is that when the last Confederate veteran, Walter Washington William, died in 1959 he received an official 21 gun salute, had his coffin draped in a Confederate flag, and an official monument was erected in his honor at Gettysburg National Military Park in Pennsylvania.