John Reeves is the author of the forthcoming book The Lost Indictment of Robert E. Lee: the Forgotten Case Against an American Icon.  It will be published by Rowman & Littlefield in May 2018. 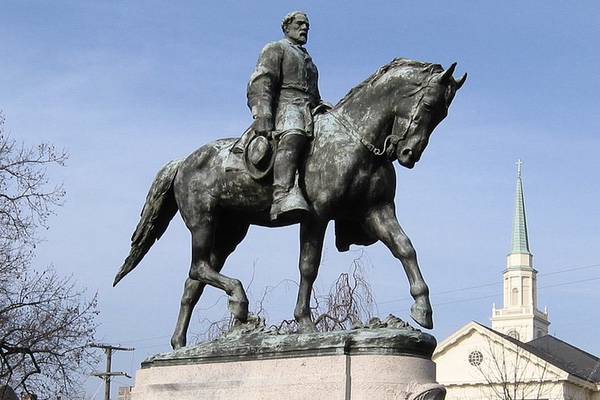 On March 26, 1866, the New York Daily Tribune published a shocking account of Robert E. Lee’s actions in 1859 by a former Arlington slave named Wesley Norris. After offering details about his escape from Arlington and subsequent capture, Norris said, “Dick Williams, a county constable was called in, who gave us the number of lashes ordered; Gen. Lee, in the meantime, stood by, and frequently enjoined Williams to ‘lay it on well,’ an injunction which he did not fail to heed; not satisfied with simply lacerating our naked flesh, Gen. Lee then ordered the overseer to thoroughly wash our backs with brine, which was done.” After the brutal punishment, all three slaves – Wesley Norris, his sister Mary, and their cousin, George Parks – were eventually hired out to other slave owners far away from Arlington.

Shortly after Norris’s testimony appeared in the Tribune, another anti-slavery periodical, The Independent, published an excerpt for “the admirers of General Robert E. Lee” under the headline, “Gen. Lee a Woman Whipper.” That particular piece concluded with the line, “A woman whipper a Christian gentleman!” Exposing Lee as a hypocrite was a preferred line of attack for the radical press at the time.

Lee acknowledged that the three slaves had run away in a letter to his son shortly after the events in question, though he didn’t mention that they had been whipped. After Norris’s testimony appeared in the press seven years later, Lee wrote privately, “The statement is not true; but I have not thought proper to publish a contradiction, being unwilling to be drawn into a newspaper discussion.” The former Confederate general-in-chief refused to publicly defend his treatment of the Arlington slaves. He hoped national reconciliation would result in a correction of the record at some point in the future.

As Americans reconsider the legacy of Robert E. Lee after the events of Charlottesville, it’s important to understand his connection to the institution of slavery. Lee presented himself after the war as having always been an opponent of the peculiar institution. The historical record does not support such a claim, however. Lee owned or managed slaves for over thirty years – in April 1861, he oversaw roughly 200 slaves -- and always sought to maximize the value of his human property. The idea of Lee as a proto-abolitionist is untenable. The case of Wesley Norris, Mary Norris, and George Parks proves this beyond a doubt.

Is there evidence to suggest Lee was a heartless slave driver? Lee’s leading biographer, Douglas Southall Freeman, did not think so. He wrote, “There is no evidence, direct or indirect, that Lee ever had them or any other Negroes flogged. The usage at Arlington and elsewhere in Virginia among people of Lee’s station forbade such a thing.” Freeman, who described the “libel” as an example of the “extravagance of antislavery agitators,” presumably didn’t believe Norris’s statement counted as evidence. A more recent biographer of Lee, Elizabeth Brown Pryor, thought Wesley Norris’s account “rings true.” After a thorough examination of the relevant documents, she determined that “every detail of it can be verified.”

We will never really know for certain if Lee had the three slaves whipped and then had their backs washed in brine. The evidence isn’t strong enough to allow us to pass judgment, one way or another. Could Wesley Norris have made it all up? We can’t answer that definitively. Without more direct testimony from the victims, we’ll probably never know the complete story.

We do have plenty of evidence, however, that Lee optimized the value of his slaves by sending them away from their homes and families to work for hirers in lower Virginia. Just because it was a traditional practice in the South at the time doesn’t make it any less harsh, from the perspective of the slaves. Even if Wesley Norris, Mary Norris, and George Parks were never whipped, we do know they ran away in order to be free only to be captured, jailed, and sent away from their community. The bare facts of their story alone are heartbreaking enough.

Lee took over the responsibility of managing approximately 200 slaves, across three different properties, after his father-in-law died in 1857. He then began hiring out slaves as a means to raise funds for the estate and get rid of the most recalcitrant servants. Of the 35 slaves over twelve-years-old at Arlington in 1858, Lee hired out eleven of them that year. Over time, he would hire out even larger numbers, sending them to Richmond and other locations in lower Virginia. According to the historian Joseph C. Robert, all of the best field hands from Arlington had been hired out by 1859.

Lee also attempted to protect his family’s economic interests in the courts. In an appeal to the Virginia Supreme Court, he asked if he could hire out his slaves even farther south outside the boundaries of Virginia. He argued that some of the slaves had become insubordinate and that hiring them out down South would make it more difficult for them to run away. The Court declined his request. According to Wesley Norris’s statement, he eventually was hired out in Alabama, which would have been contrary to the guidance of the court. In the appeal, Lee’s lawyer also questioned a stipulation in the will about liberating the father-in-law’s slaves, “I submit that the emancipation of the slaves should be postponed till the said legacies are raised, and the debts of the estate are paid off.” Lee was clearly asking the court to place the financial interests of his wife and children above the freedom of 200 slaves. He believed his father-in-law would have wanted it that way.

An understanding of Lee’s personal experience with slavery helps us to better evaluate his postwar comments on the institution. Just days after the war, Lee declared of slavery, “the best men of the South have long been anxious to do away with the institution, and were quite willing to-day to see it abolished.” Lee added that the South had only supported slavery because there hadn’t been a plan to “dispose” of the “negroes.” Eight months later, in his testimony before the Joint Committee on Reconstruction, Lee stated that he wished Virginia could get rid of its “negroes” and that he had “always been in favor of emancipation – gradual emancipation.” Like many Americans after the war, Lee preferred to move forward as if he had been opposed to slavery all along.

A year before his death, Lee apparently offered additional thoughts on slavery to the Reverend John Leyburn. Sixteen years later, in May 1885, Leyburn published the interview in The Century, a popular monthly magazine in the nineteenth century. According to Leyburn, Lee was hurt by Northerners who “insisted that the object of the war had been to secure the perpetuation of slavery.” Lee told the Reverend that this wasn’t true, and that he had never been an advocate of slavery. Indeed, he was happy that slavery was abolished, and would “cheerfully have lost all I have lost by the war, and have suffered all I have suffered, to have this object attained.” Lee concluded the interview by asking that journalists use their pens to “see that justice is done us.”

The views put forward in the interview with Leyburn, alas, are not consistent with Lee’s actions and statements during his adult life. Most likely, Reverend Leyburn embellished Lee’s remarks somewhat, fifteen years after his meeting with the Confederate hero. Or perhaps Lee didn’t want his memory tarnished by a former connection with increasingly reviled institution. Inexplicably, by 1885, despite overwhelming and conclusive evidence to the contrary, Lee had become a quasi-abolitionist in the minds of many of his admirers. Even today, this is the Lee that many Americans still honor and remember.