It’s Good to See the Mainstream Media Debunking Conspiracy Claims, but Where Were They Years Ago When RFK’s Death Became Fodder for Nutty Stories? 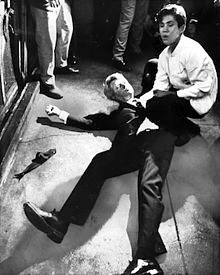 Boris Yaro's photograph of Robert F. Kennedy lying wounded on the floor immediately after the shooting.

In June 2017 CNN accepted the resignations of three journalists involved in a story about a supposed investigation into a pre-presidential inaugural meeting between an associate of President Trump and the head of a Russian investment fund. In taking down the story, CNN said it did not meet its editorial standards. The episode was a damaging blow for a network that Trump has frequently derided as “fake news.”

However, this is not the first time that a leading news organization like CNN has erred in presenting “factual, well-researched and unbiased information” to the public.

In recent years major US media outlets, including CNN, have reported on RFK assassin Sirhan Sirhan’s attempts to secure a new trial through the California court system, claiming he was a hypnotized assassin and therefore not responsible for RFK’s death. Without exception they do not adequately challenge Sirhan’s claims. With the 50th anniversary of the assassination of Senator Robert F. Kennedy fast approaching – it’s next year – this trend appears likely to continue. Documentary makers and book publishers alike are lining up at the starting gate; all waiting to be chronicled by the news media.

For the past few years stories about Sirhan’s parole hearings and other efforts to secure his freedom have omitted challenges to his testimony that he had no memory of the assassination (see here and here and here).

There were additional news stories about purported “assassination witnesses” who have altered their original testimonies and now support the notion that Kennedy had been killed by more than one gunman. No mention was made of factual and scientific evidence that challenged these claims.

One can’t help but postulate about the reason why – but an educated guess might be that journalists either do not have the time to research their subject matter carefully or they are in sympathy or collusion with conspiracy theorists. This is called lazy journalism. Lazy journalism happens when journalists don’t do their homework, and don’t check the accuracy of the information they find. Often, their reportage does not come under close editorial scrutiny.

Two examples of media trust-in-me-style stories are CNN’s reporting of the RFK assassination and the BBC’s story of alleged CIA agents present at the scene of RFK’s assassination.

In 2012 CNN interviewed assassination witness Nina Rhodes Hughes, in which she claimed she heard more than eight shots fired in the Ambassador Hotel pantry, and an audio engineer who said that after examining an audio recording of the RFK assassination he concluded that 13 or 14 shots were fired.

The BBC aired a Newsnight story about alleged CIA agents skulking around the Ambassador Hotel in Los Angeles on the night of the assassination with the clear inference they had been involved in a plot to kill the Senator.

The CNN journalists accepted without challenge Rhodes-Hughes belief that she heard from 10-14 shots. They did not query her original 1968 FBI interview transcript which stated she heard, “eight distinct shots.” Nor did they inform their viewers that the overwhelming majority of the 77 assassination witnesses who ventured a guess at the number of shots fired, identified 8 shots or less.

Additionally, CNN interviewed a forensic audio engineer, Philip Van Praag, who said that at least 13 or more shot sounds can be heard on the only known recording of the shooting. In their sin of omission CNN did not reference the work of an acoustics company based in England which challenged Van Praag’s claims.

In fact, the work of Peter French Associates is never mentioned in news stories about the RFK acoustics evidence despite numerous articles referencing their work which appear on the public record. Acoustics experts Philip Harrison and Peter French examined the RFK assassination recording and concluded no more than eight gunshots could be identified.

Unlike CNN’s interviewee, Philip Van Praag,Philip Harrison and Peter French are professional acoustics experts. Examination of sounds by audio engineers and sounds examined by acoustics experts are two totally different fields of inquiry. In examining sounds, acoustics evidence is always considered to be superior. In the decade since the Harrison acoustics report was published no acoustics firm in the world has challenged its findings.

A year following the erroneous BBC/CIA story, and following many emails to the BBC delineating their numerous errors by this author, the flagship news programme of the BBC admitted fault. Had BBC fact-checkers bothered to research the background to their story about alleged CIA agents present when RFK was killed, they would have at least made attempts to contact the individuals who were named in the report or at least held the story until the allegations could be confirmed.

As the true facts eventually revealed, the BBC and CNN (and other media outlets that simply copied their reports) were little more than mouthpieces for conspiracy advocates, who apparently held the journalists in their thrall. In both cases the journalists abrogated their professional responsibility in favor of biased reporting allowing no wider context to the stories let alone serious counter - claims to their conclusions.

The flawed BBC and CNN stories not only raised questions about editorial standards at two of the world's largest news organizations. Journalists and conspiracy advocates alike should remember that online witch hunts have very real consequences. Sirhan’s lawyer, William Pepper, who once represented Martin Luther King Jr.’s assassin, James Earl Ray, accused an innocent former soldier of having been the real King assassin. It had a devastating effect on his reputation and his family. Another innocent victim was an aide to Robert Kennedy who had been accused of assisting in the purported RFK assassination conspiracy.