Blacks in Britain Were Discouraged from Joining the Army During World War I. They Did It Anyway.

Stephen Bourne is the author of several books including Black Poppies – Britain’s Black Community and the Great War (The History Press). His latest work is latest book is Fighting Proud: The Untold Story of the Gay Men Who Served in Two World Wars (2017). 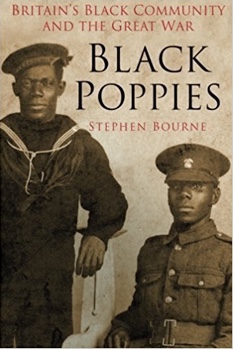 Jackie Turpin, writing about his father Lionel, a Guyanese Merchant Seaman in Battling Jack: You Gotta Fight Back (2005), said:

Though I am not a military historian, when the opportunity came to me to write a book about the contribution of black servicemen to the First World War - to coincide with the 2014 centenary - I readily accepted the contract from The History Press. My intention was to include servicemen and Britain’s wider black community. The History Press agreed, and so I divided my book, Black Poppies, into three sections: military, home front and the 1919 anti-black race riots, which occurred when returning white servicemen clashed with black communities in some of Britain’s seaports, such as Cardiff and Liverpool.

Before starting on this journey, I already had some knowledge of the lives of black servicemen and the experiences of the black community in the First World War. These included memories of my adopted aunt, Esther Bruce, a mixed-race Londoner born in 1912. When I was younger, she shared with me many anecdotes about her early childhood. There were, however, many stories I had not heard about. For example, I was deeply moved by the tale of Private Herbert Morris, a sixteen-year-old Jamaican lad who joined the British West Indies Regiment but suffered trauma by his exposure to the noise of guns on the front, where he stacked shells. Consequently, he was executed for desertion, though pardoned in 2006. Also moving is the story of Isaac Hall, another Jamaican, working in Britain, who was imprisoned as a conscientious objector when conscription was introduced in 1916. He suffered bullying and horrific injuries during his internment at Pentonville Prison but Isaac was saved from his ordeal by the pacifist, Dr Alfred Salter.

Apart from Aunt Esther’s stories, first-hand testimonies have been almost impossible to find, though I did manage to gain access to Norman Manley’s memoir of his experiences after he enlisted as a private in the British army in 1915. It had been published posthumously by the Jamaica Journal in 1973. Sweet Patootee’s superb television documentary Mutiny (1999) includes interviews with survivors of the British West Indies Regiment. I also found an interview with the acclaimed British-born singer Mabel Mercer in a 1975 edition of Stereo Review in which she recalled her career on the British stage as a music hall entertainer during the First World War. It was a tough life for young Mabel, and contrasted with her later career as a glamorous star of New York cabaret in which she influenced other singers, including Frank Sinatra.

Photographs were difficult to locate, but I was fortunate to be given permission by the family of Marcus Bailey to feature him in his sailor’s uniform on the cover of the book. Marcus, who came from Barbados, joined the navy in 1903 and was a member of the crew of the HMS Chester during the First World War. He was serving on the ship when it was hit by seventeen 150mm shells during the Battle of Jutland. Marcus continued to serve in the Merchant Navy after the war until he died, in 1927, at the age of 43. Both of his British-born children, James and Lilian, served in the British forces during the Second World War.

Black Poppies concludes with a snapshot of Britain’s black community in 1919, a landmark year which witnessed, amongst other things, the beginnings of jazz music in Britain and the influential work of some of our earliest black-led publications and groups, including the African Progress Union. Though black settlers have been part of our landscape since at least the 15th century, it is generally accepted that the arrival of the Empire Windrush in 1948 marked the beginning of the modern black community in Britain. It is possible that 1919 will now stand out as another landmark year. Between 1914 and 1919, it’s estimated, the population of blacks in Britain grew from 10,000 to 30,000.

It is important to recognize that, while racist attitudes existed in Britain during the First World War, evidence shows that black men were successful in joining British army regiments and fought alongside their white comrades. Some surviving photographs show that some regiments were racially integrated and, in Norman Manley’s surviving testimony, he talked about being accepted as a comrade on the front-line by the working-class “tommies.” Manley discovered that the situation was very different in the officer class, though the black Briton Walter Tull and others did succeed in becoming officers, against the odds. Black sailors served throughout the war in the Merchant Navy and in the black Jamaican William Robinson Clarke, after paying his own passage to Britain, served with distinction from 1915 in the Royal Flying Corps.