Peter Cole is a historian of the twentieth-century United States, South Africa and comparative labor history. Dr. Cole is Professor of History at Western Illinois University. He is the author of Wobblies on the Waterfront: Interracial Unionism in Progressive Era Philadelphia (University of Illinois Press, 2007), co-editor of Wobblies of the World: A Global History of the IWW (Pluto, October 2017), and at work on Dockworker Power: Race, Technology & Unions in Durban and the San Francisco Bay Area. Follow him on Twitter @ProfPeterCole. 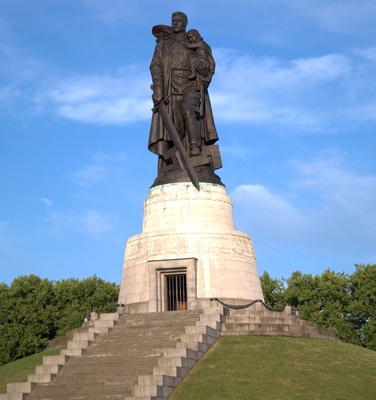 Dunkirk is on its way to global blockbuster status. Very possibly, it will help viewers appreciate the horrors of war. However, those interested in World War II can, and should, go deeper.

Gazing much further east, most students of WWII appreciate that the war in Europe was not won on the French beaches but, rather, its Eastern Front. They know that the Soviet Union played an, arguably the, instrumental role in defeating the Nazis. As important as the Normandy invasion in 1944 was, the Battle of Stalingrad turned the tide seventeen months prior.

In today’s America and world, many learn about World War II, other wars, and history through film. However, public monuments offer chances for deeper, quieter, and ultimately perhaps more satisfying reflections. One particularly instructive one is the Soviet War Memorial at Treptower Park located in Berlin, the capital of the defeated Nazis.

Treptower Park just might be the most impressive and important war memorial Americans never have heard of, demonstrating how a monument can both educate and facilitate reflection.

This memorial also reveals how a nation can accept—and, in the case of Germany, has accepted—that its own defeat was for the greater good of humankind.

Further, it reminds visitors including those from the US (however few) of the tremendous sacrifices incurred by our wartime ally. In Russia, WWII still is called the Great Patriotic War and remains deeply enshrined in public consciousness. Hence, Treptower Park allows Americans to learn about and empathize with Russians, a worthy endeavor during a(nother) time of great tension between our two nations.

After World War II, the four leading Allies militarily occupied and temporarily divided Germany and its capital, Berlin. When the Cold War escalated, Britain, France, and the United States united their zones and created the Federal Republic of Germany, better known as West Germany. Led by the United States and without the consent of the German people, the formation of West Germany was believed necessary as a bulwark against potential Soviet threats. The Soviets, enraged, quickly created the Democratic Republic of Germany, or East Germany. So, too, in Berlin where the Western Allies’ three zones became West Berlin—officially part of West Germany despite being one hundred miles from the rest of that nation.

Joseph Stalin, leader of the Soviet Union, soon responded to what he saw as Western provocation by closing all land access to West Berlin. The United States, United Kingdom, and other allies undertook the famous Berlin Airlift, which lasted about eleven months before Stalin yielded. Tensions de-escalated, a bit, but heightened in 1961 when East Germany constructed a nearly one hundred-mile wall around West Berlin, primarily to prevent East Germans from escaping to “the West” rather than keeping West Berliners out of the East.

On May 8, 1949, just days before the Berlin Airlift ended and on the fifth anniversary of the Nazi surrender, the Soviets unveiled its Treptower memorial. Located in a large park in an East Berlin neighborhood, it memorializes the 80,000 Soviet soldiers who died in the massive Battle of Berlin in April-May 1945 (in which 150,000 Germans also died).

The Soviet War Memorial is appropriately monumental and awe-inspiring. Russian artist Yeveny Vuchetich, the lead designer, combined sculpture, landscaping, and architecture to create an enormous monument commemorating the Soviet victory in the largest and bloodiest war in world history. Though the focus is on ordinary soldiers and citizens—this genre is named Socialist Realism—to many, it understandably feels Stalinist.

The memorial covers more than 22 acres. One walks into the park, from one of two streets, through large stone archways. Several hundred feet later stands a 10-foot high statue of a woman who, presumably, has lost a son, husband, or other loved one. “Mother Homeland” is encircled, on one side, by large willow trees. Turning around, one’s eyes immediately come upon two 50-foot high red granite blocks that are highly-stylized Soviet flags. In the extreme distance stands the rest of this epic monument.

Weeping birch trees flanking both sides, visitors walk between two immense statues of Soviet soldiers, each with a machine gun, medals pinned to their chests, and on bended knees. These flank the entrance into the memorial’s main section. One walks down a handful of steps where five, large sections of lawn with identical stone monuments adorning each. Underneath these fields lie about 7,000 Soviet soldiers who fell during the Battle of Berlin. On either side of these mass graves, to reach the raised mausoleum at the end, stand eight large limestone blocks with relief sculptures celebrating the heroism of Soviet soldiers and citizens, men and women. These sarcophagi are inscribed with quotes from Stalin in Cyrillic and German (there are no English translations).

Finally, after walking about 500 feet, one approaches Treptower’s central feature. Walking up a series of steep, granite steps, one gazes up at the solitary figure of a Soviet soldier, standing almost 40 feet high. As the statue rests atop a mausoleum that itself is upon a small hill, all told the statue stands about 100 feet above the mass graves. A child rests in one of this heroic everyman’s arms; in his other, a sword points downward. Beneath his feet are the broken remains of a Nazi swastika.

In 1949 and for another eighteen years, Treptower Park was the world’s largest war memorial. In 1967, the Soviets unveiled an ever-larger one, to its epochal victory at Stalingrad. About 1,500,000 humans were killed and wounded there, the bloodiest battle in the history of the world. More Soviet soldiers died in this single campaign than all the Americans in WWII. Unlike Treptower Park, though, “To the Heroes of the Stalingrad Battle” lies on Russian soil.

In 1990, East and West Germany reunited, the symbolic—and, to many, real—end of the Cold War. Before formally reunifying, East and West Germany signed an agreement with the four countries that had occupied Nazi Germany. Among other aspects, Germany agreed to maintain Treptower Park and other Soviet memorials despite being testaments to German defeat. Germany has lived up to its obligations, thus far, including major renovations of Treptower.

Late in life, Robert McNamara, US Secretary of Defense for most of the 1960s and, thus, among the Americans most responsible for the US war in Vietnam, offered some advice. In a powerful documentary film by Errol Morris, McNamara’s very first “lesson” was “empathize with your enemy.”

One way for Americans to do so would be to understand the incredible suffering of the Soviet peoples during WWII. During a time of tremendous political tensions between our two governments, building empathy seems wise.

Treptower Park can play an important role in educating Americans about the complicated history of US-Russian relations including when—together—we fought fascism. It allows us to revisit the Soviet Union’s central role in defeating the Nazis.

Not only did the Soviet Union play the leading role in defeating Germany, over 26,000,000 of its people (soldiers and civilians) were killed. Let that sink in for a moment. By contrast and not to diminish the sacrifice, the United States lost about 425,000—nearly all military.

Treptower Park also can help Americans appreciate how Germans have tried to accept—rather than forget—its most terrible era, of Nazism. For that matter, the Japanese also could learn from the German approach to WWII.

Treptower has no parallel in the United States. What if the victorious People’s Republic of Vietnam built a memorial to its millions of dead in Washington, DC? Well, that war was on Vietnamese soil and some Americans still deny the United States “lost.” What if the Union built an epic monument to its bloody victory over the Confederacy in Richmond, the capital of the defeated Confederacy? Well, the federal government hoped to heal the wounds of the Civil War rather than create deeper ones. Though in Pennsylvania, for instance, Gettysburg commemorates both sides’ suffering.

Dunkirk and Treptower Park are spectacles as well as testaments to sacrifice. They both focus upon those who have suffered, persevered, and (ultimately) triumphed. They feature ordinary people, generally unnamed, who experienced the extraordinary. While stone statuary cannot bring the visceral feel that films can, Treptower Park does not disappoint. One need not watch English soldiers drowning in the English Channel to appreciate the horrors of war. Instead, Treptower Park educates in a quieter, potentially more illuminating, way.