Bradley J. Brewer is a Modern European historian who resides in Leadwood, Mo. 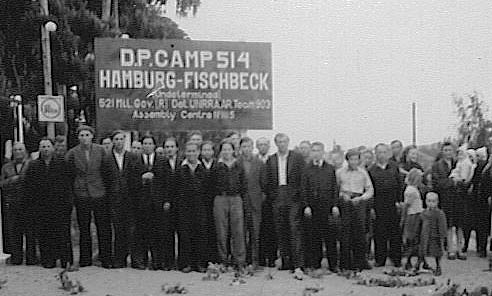 President Donald J. Trump’s use of military force in reaction to Syria’s chemical weapons attack against civilians is perplexing for a lot of reasons. Not the least of which is the fact that President Trump cited the horrific pictures of young children being exposed to deadly chemicals as justification for his action. Trump’s response was basic humanitarian outrage, nothing more. It is strange, even cruel and inhumane that the Trump administration was moved to act in such an emotional manner yet refuses to allow Syrian refugees, many of them children, into the United States. There was a time however, when the leaders of the United States believed that those displaced from their homeland due to the consequences of war deserved a second chance and the opportunity to be free of fear and persecution, even if they had supported the enemy at some point in their past.

Europe, especially Germany, following World War II was full of refugees and displaced persons (DPs) looking to find a new home. Among the mass of displaced humanity were 10 to 12 million Germans who had once called the Sudetenland of Czechoslovakia, Yugoslavia, and German territory occupied by Poland after the war their home. Much like the Syrians are in 2017, the ethnic German expellees were living in limbo after being expelled by governments looking to make their nations ethnically homogeneous. Unlike other categories of displaced persons the expellees were not eligible to receive aid from relief agencies such as the International Refugee Organization (IRO), whose constitution prohibited such acts, and the United Nations Relief and Rehabilitation Agency (UNRRA). This was due to expellees having been supporters of the German Reich, and thus were considered masters of their own miserable fate, and not a priority for relief and placed outside the DP and refugee classifications by the Allies.

Historian Sidney B. Faye assessed that the United States and Great Britain portrayed the expellees as the unnecessary byproduct of the political machinations of great powers and saw them as of little importance immediately after the war. In reality the expellees were part of a larger DP problem facing war torn Europe, a problem that needed a solution. It became quickly apparent that Germany alone could not effectively integrate the entire DP population into its recovering economy. Some of the slack was going to have to be taken up by other nations, including the United States.

For the most part, the media was in favor of the resettlement of DPs to the United States. A March 1, 1946 editorial in the New York Times fervently exclaimed that as a nation “we can speak more convincingly for freedom everywhere when we have done our fair share, even more than our fair share, to bring real freedom to those who have suffered most.” President Harry S. Truman stated the same sentiment in his 1947 State of the Union Message declaring “so far as admitting displaced persons is concerned, I do not feel that the United States has done its part.” He was correct; the United States had only admitted 5,000 since May of 1946. Truman let Congress know that the immigration of DPs to America was a priority regardless of their religious faith and ethnicity.

After much deliberation and opposition by organizations such as the Veterans of Foreign Wars (VFW), the American Legion and a few members of Congress, all of which saw the DPs as not only a threat to spread Communism, but to the economy as well. The Displaced Persons Act was passed by both houses of Congress, and became official on June 25, 1948. It legalized the immigration of 200,000 DPs and 13,685 expellees of German ethnic origin over a two-year period ending in 1950. President Truman signed the Displaced Persons Act with reservations believing it possessed a “pattern of discrimination and intolerance wholly inconsistent with the American sense of justice.” Echoing Truman, John J. McCloy United States High Commissioner for Germany, voiced the opinion in late December of 1951 that the expellees were a “boon” to the German economy, and would also make a much needed positive impact on the American economy. McCloy stated that the U.S. did need and could use good people,” to fill gaps in the workforce, and urged Congress to amend and extend the Displaced Persons Act so that the U.S. could take “as many expellees as we could get.” Subsequently, in July of 1951 the Displaced Persons Act was amended to allow the immigration of 400,000 DPs and 54,744 German expellees. The United States was now doing its “fair share.”

Having been citizens of an enemy regime, the conditions of the expellee immigration to the United States were regulated more tightly than that of the majority of DPs. The expellees were required to sign an oath that bound them to the terms of employment offered by a sponsor. Sponsors provided employment to the expellees at the prevailing living wage of the time, transportation from their point of entry to their place of settlement in the United States, satisfactory housing, and a guarantee that the expellees would not become government dependents. Following the war DPs and expellees were needed to not only fill the demand for agricultural and mining labor that existed, but to also fill vacancies in medicine, science and higher education. Thus, DPs and expellees played a vital role in the post-war American economy.

Much like the Syrian refugees of today, the German expellees were seen as a threat not to only to the American economy, but democracy and freedom as well. As Syrian refugees are stigmatized as being possible conduits of terror and radical Islam at present, the DPs and expellees of the post-World War II era were thought by many Americans to be possible Communist infiltrators. However, President Truman and both houses of Congress along with other governmental leaders, unlike the Trump administration, knew that leading the world required thoughtful action, not impulsive reaction.

Accepting refugees was risky then, as it always will be. But it’s worth the risk. As John J. McCloy so deftly surmised in 1951 “countries of immigration gain, and countries of emigration suffer.” No truer and wiser words have ever been spoken.