Arica L. Coleman is the author of That the Blood Stay Pure: African Americans, Native Americans and the Predicament of Race and Identity in Virginia, a Choice Outstanding Academic Title for 2014. Her article “Mildred Loving: The Extraordinary Life of an Ordinary Woman" received the 2016 Gloria Anzaldua Award Honorable Mention from the American Studies Association. She is a Time Magazine contributor. She can be reached at www.aricalcoleman.com. 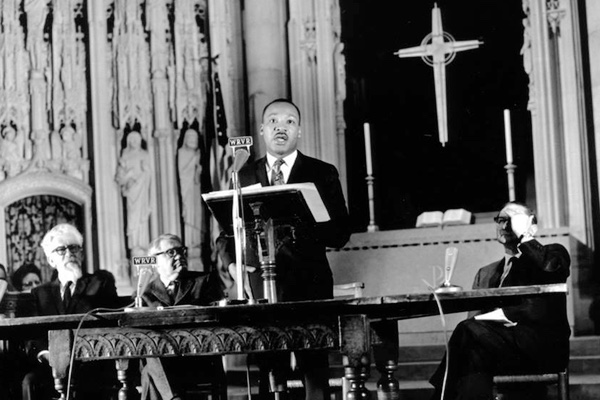 “I am sure that since you have been engaged in one of the hardest struggles for equality and human rights, you are among those who understand fully, and who share with all their heart, the indescribable suffering of the Vietnamese people. The world’s greatest humanists would not remain silent. You yourself cannot remain silent.”—Letter from Thich Nhat Hanh to Dr. Martin Luther King Jr., 1965. 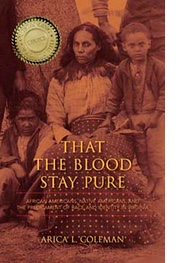 On April 4, 1967, Dr. Martin Luther King Jr. stood before a crowd of 3,000 anticipating listeners gathered at the Riverside Church in the City of New York. King was no stranger to Riverside Church, known for its national and global activism since opening its doors in 1930. For almost a decade, the civil rights leader’s visits to the Neo-Gothic edifice was an annual event; but this evening was different as King’s message was a departure from domestic issues about race and economic inequality. Instead he addressed the most pressing foreign policy issue of the day: the war in Vietnam.

The even toned eloquence of King’s voice echoed throughout the heightened cathedral as he patiently laid out his case against “my own government” which he characterized as “the greatest purveyor of violence in the world today.” Using the platform of the Clergy and Laymen Concerned About Vietnam (CalCAV), an interfaith organization created in October 1965, and the sponsor of the Riverside Church event, King admonished his audience, “Silence is betrayal.” Hence, “For the sake of those oppressed in the [American] ghettoes, for the sake of this government, for the sake of the hundreds of thousands trembling under our violence, I cannot be silent.”

King’s nearly hour long speech, “A Time to Break Silence: Beyond Vietnam,” was a scathing rebuke of the American government for its role in the escalating violence in the small Southeast Asian country riven by civil war. The official platform was that U. S. intervention was necessary to prevent what officials characterized as a “domino effect” for the potential spread of communism. But King challenged this assertion by recounting a laundry list of U. S. overreach in Vietnam spanning two decades which included the financial backing of France’s post –WWII effort to recolonize the peninsula (1946-1954); its disregard for the Geneva Agreement; its support of dictator Ngo Dinh Diem (1955-1963); its deployment (beginning in March 1965) of an estimated 400,000 American troops—disproportionately Black and/or poor—to the region thus “testing out our latest weapons [Napalm] on them just as the Germans tested out new medicine and new tortures in the concentration camps of Europe”; and engaging in human rights atrocities with impunity “destroying families and villages.” The esteemed orator concluded that rather than a war against communism, the Vietnam War was a war of imperialism.

That historic evening served as a capstone of what had been a two year journey of King’s move “to break the betrayal of my own silences,” which began not with his membership in the CALCAV, but rather with a letter from a young Buddhist monk in Saigon named Thich Nhat Hanh.*

A prolific author, calligraphy artist, social activist, and humanitarian, Thich Nhat Hanh was born in Central Vietnam in 1926; he was ordained a Buddhist monk in 1949, and established the Phuong Boi (Fragrant Palm Leaves) Meditation Center in 1955. Hanh came to the United States in 1961 to study and teach at Princeton and Columbia Universities, but returned to his “fatherland” in 1963 after several monks self-immolated in order to bring international attention to the ruthless policies of the Diem regime which included government raids on Buddhist temples. 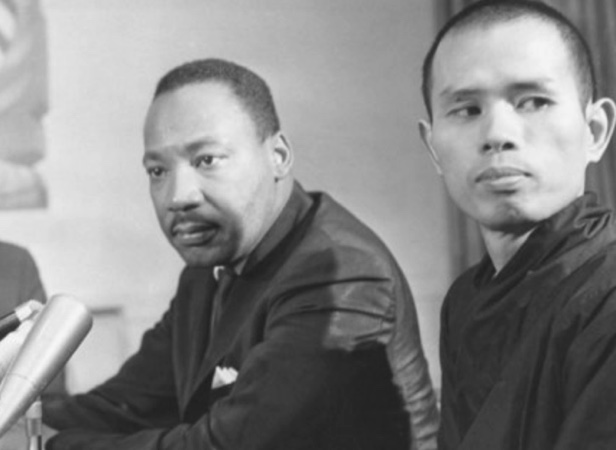 In his June 1, 1965, letter to King, “In Search of the Enemy of Man”—written three months after the U.S. campaign Operation Rolling Thunder began in Vietnam— Hanh began by refuting Western interpretations of self-immolation as mere suicide which is caused by, among other things, “a lack of courage to live and cope with life’s circumstances,” which “is considered by Buddhism one of the most serious crimes.” But to sacrifice one’s self—as the Buddha had done in Jakata: Or Stories of the Buddha’s Former Births when he allowed a starving lioness to devour him instead of her cubs—the monks and nuns believed they were “demonstrating a willingness to “protect the people” by “practicing the doctrine of highest compassion by sacrificing [themselves]in order to call the attention of, and to seek help from, the people of the world.” Hanh reminded King of the most recent self-immolation which occurred on April 20, 1965, when “a Buddhist monk named Thich Giac Thanh burned himself.” These were acts of a desperate people continually victimized by the atrocities of war with no end in sight. As Hanh emphatically stated to King, “Nobody here wants the war. What is the war for, then? And whose is the war?”

The Buddhist monk compared the long struggle for an independent Vietnam to the Civil Rights Movement identifying the enemies of man as not man himself, but rather in the case of Vietnam “intolerance, fanaticism, dictatorship, cupidity, hatred, and discrimination; and in the case of the U.S., “intolerance, hatred, and discrimination.” All were a condition of the heart which could only be cured by divine intervention via the activism of communities of faith. Hence, Hanh implored the prominent Black southern preacher stating, “You cannot be silent since you have already been in action and you are in action because, in you, God is in action—too.”

Hanh’s letter awakened King’s conscience and he began immediately to speak out against the war; however, due to strong opposition from those within his inner circle who feared that his anti-war stance was counterproductive to the Civil Rights Movement, King tempered his public criticism and agreed that it would be more prudent, at least for the moment, to use his influence behind the scenes.

King and Hanh met in Chicago in 1966 during the monk’s three-month international tour as a representative of the people, particularly the Vietnam village peasant population who were pleading for an end to the war. At a June press conference in Washington, D.C. Hanh stated “that the war kills far more innocent peasants than it does Viet Cong.” He reiterated this point in his book, Vietnam: Lotus in a Sea of Fire—A Buddhist Proposal for Peace, stating that the masses cared little about ideology and did not support the South Vietnamese-U.S coalition or the National Liberation Front. “The first problem of the Vietnamese peasant” Hanh asserted was “How to survive in the midst of all the forces that threaten him; how to cling to life itself.”

King was so impressed with Hanh that in January 1967, he wrote a letter to the Nobel Institute nominating the peace activist for that year’s Nobel Peace Prize stating, “I do not personally know of any one more worthy of the Nobel Peace Prize than this gentle Buddhist monk …. Here is an apostle of peace and non-violence.” King also echoed the views of his Buddhist colleague and friend in his Riverside speech, quoting directly from his peace proposal:

This is the message of the great Buddhist leaders of Vietnam. Recently one of them wrote these words, and I quote: Each day the war goes on the hatred increases in the heart of the Vietnamese and in the hearts of those of humanitarian instinct. The Americans are forcing even their friends into becoming their enemies. It is curious that the Americans, who calculate so carefully on the possibilities of military victory, do not realize that in the process they are incurring deep psychological and political defeat. The image of America will never again be the image of revolution, freedom, and democracy, but the image of violence and militarism (unquote).

In other words, the U. S. presence in Vietnam guaranteed a Viet Cong victory.

The following month King and Hanh met again in Geneva, Switzerland, at the Pacem in Terris (“Peace in the World”) Conference sponsored by the World Council of Churches; they would meet for the final time in Atlanta, Georgia, in late February of 1968. By this time Hanh—having been assured that he faced certain assassination if he returned to Vietnam for his peace activism—was living in exile in the South of France. As was customary, the two men spoke about their common goal for peace and their longing to create Beloved Communities built on compassion and mutual respect for all of humanity.

On April 4, 1968, on the anniversary of his historic speech, King was shot dead by an assassin’s bullet. The long night’s war in Vietnam persisted for an additional seven years.

In a poem “Our Green Garden” from his collection of poems on Vietnam, Hanh reflected on the tragedy of war stating,

Here is my breast. Aim your gun at it, brother, shoot!

Destroy me if you will

And build from my carrion whatever it is you are dreaming of.

Who will be left to celebrate a victory made of blood and fire?

Indeed. On April 30, 1975, King and Hanh’s prophetic words were fulfilled as the red and blue flag of the Viet Cong was raised over the presidential palace in Saigon as the last of the troops headed home to an America boiling over with disdain.

*King was the lone Black and southern member of the CALCAV. According to Hanh in his book Vietnam: A Proposal (see footnote 36) “The word ‘Thich’ has been widely but erroneously interpreted as meaning ‘Venerable’ or ‘Reverend.’ Its actual purpose is to replace, for the monks and nuns of Vietnamese Buddhism, the family names to which they were born . . . and represents the family name of the Lord Buddha, Sakya (in Vietnamese, Thich-Ca; abbreviation, Thich), of whose spiritual ‘family’ they have become a part. The appropriate title in Vietnamese, which is the equivalent of ‘Venerable’ or ‘Reverend,’ is Dai Due.’’ After 39 years in exile, Hanh made his first visit to Vietnam in 2005. He is now 92 years old and continues to live in the South of France at his Plum Village Monastery.